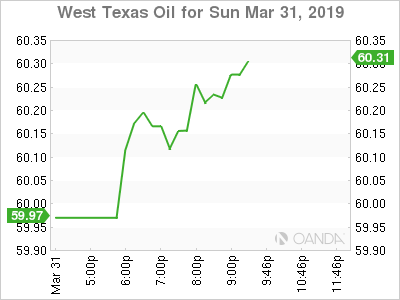 Oil is higher at the start of the trading week. The US dollar is softer giving crude some upward momentum. Brexit uncertainty after Prime Minister May’s third attempt to get her proposal through was a failure is on the rise as a long extension could mean the end of the divorce proceedings.

The OPEC+ agreement to limit production has been the stabilizing force despite rising US production. Sanctions on Venezuelan and Iranian exports have reduced supply and lifted prices. Venezuelan exports are set to rise after its largest terminal is back online after an electricity blackout caused it to shut down last week.


The timing couldn’t be worse for the Maduro government as it struggles to remain in power after international support to opposition leader Juan Guaido.

West Texas Intermediate is trading above $60 ahead of a busy week for markets. Energy demand could be impacted if global growth concerns rise again on US-China trade anxiety. So far negotiations appear to be moving ahead, but there are few details on concrete concessions