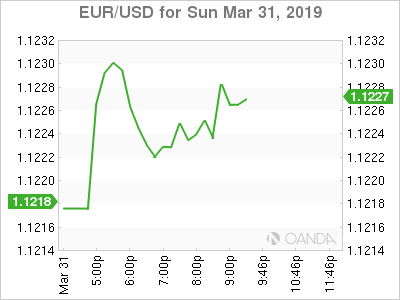 The US dollar is mixed at the start of the trading week. The Australian and New Zealand dollars advanced after positive Chinese manufacturing data not points to an expansion. Brexit is weighing down the pound after last week’s third defeat of Prime Minister May’s proposal.

US data this week will give plenty of ammunition to the market to decide if the Fed is right in pausing its monetary policy tightening. After hiking four times in 2018, the central bank has taken off the board interest rate lifts for 2019.

The market is kicking off with a healthy dose of risk appetite, but risk events and economic indicators await that could spook investors into seeking safe havens, with the big dollar the preferred destination.

Oil is higher at the start of the trading week. The US dollar is softer giving crude some upward momentum. Brexit uncertainty after Prime Minister May’s third attempt to get her proposal through was a failure is on the rise as a long extension could mean the end of the divorce proceedings.

The OPEC+ agreement to limit production has been the stabilizing force despite rising US production. Sanctions on Venezuelan and Iranian exports have reduced supply and lifted prices. Venezuelan exports are set to rise after its largest terminal is back online after an electricity blackout caused it to shut down last week.

The timing couldn’t be worse for the Maduro government as it struggles to remain in power after international support to opposition leader Juan Guaido.

West Texas Intermediate is trading above $60 ahead of a busy week for markets. Energy demand could be impacted if global growth concerns rise again on US-China trade anxiety. So far negotiations appear to be moving ahead, but there are few details on concrete concessions.

Gold is flat on the start of the Asian session. The yellow metal is trading below the $1,300 price level after geopolitical headwinds shifted and the dollar was the preferred safe haven for investors ahead of the weekend. This week will be filled with macro risk events as Brexit continues to unfold and US economic indicators could validate the Fed’s patient stance

Gold will continue to be attractive as long as a US-China trade agreement and Brexit are not finalized which all scenarios still on the table.

Economic data could keep stock markets in the black as forecast are calling from rebounds in several indicators such as retail sales and durable goods. Weather and the effects of the government shutdown made last month’s U.S. non-farm payrolls (NFP) disappoint but a healthy number is expected under normal conditions.

Central banks around the world have turned dovish with interest rate cut probabilities rising across the board. The Fed was pushing for two more rate hikes but has not pumped the brakes as a market sell off and pressure from the White House has made policy makers reconsider.

Global growth remains sensitive to trade headlines, but recently there has been more positive news as US and China appear to be close to deal. Next up will be a visit from the Chinese delegation to Washington.