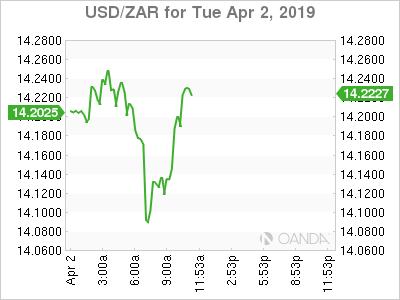 Moody’s gave the rand a bone over the weekend and today’s opinion piece shows they will give the South African government time to stabilize the economy.  On Friday, Moody’s decided to defer the schedule review of South Africa’s investment grade credit rating.  Expectations were mixed that Moody’s would join S&P and Fitch in cutting their rating to junk status.  The deferment combined with the China infused emerging market rally helped the rand rally over the last couple sessions.  Today, Moody’s gave a credit opinion that signaled South Africa’s credit rating is in-line with that of Baa3 status, the last level before junk status.

Yesterday, a second attempt of alternative Brexit options failed to yield any results, so its back to the drawing board for Parliament and PM May.  Today, she will meet with her cabinet to try to come up with a new solution ending the current impasse.  Parliament now has 10 days to find a consensus and avoid a no-deal exit.  The British pound remains vulnerable as no-deal risks slowly grow.  It is hard to say a base case exist, but many feel a longer extension is likely as Parliament appears they will need to start figuring out a new withdrawal agreement from scratch.

West Texas Intermediate crude continues to ride momentum from China optimism and as OPEC production falls for a fourth consecutive month.  Oil is having its best rally in a decade and with WTI both clearing $60 a barrel level and the 200-day SMA, momentum traders are looking for another leg higher.

Gold prices are little changed on the day, as risk assets take a break following yesterday’s surge higher.  The precious metal remains vulnerable to improving economic data in the US and China.  Today’s key data release showed US orders for business equipment declined in February, not as bad as economists’ forecasts, but still the third fall in four months.  The trade war is having an impact on corporate investment and this will remain in place until we see a trade deal.

Out of the blue, Bitcoin is back.  The cryptocurrency spiked over 20% higher overnight and at one point traded above the $5,000 level.  The recent backdrop for the steady climb higher was the fall in volatility with Bitcoin prices, but today’s major move has no specific catalyst.  Expectations remain mixed on whether we will see a Bitcoin ETF and many digital currency enthusiasts have lost interests, so if we continue to see wild swings, this could be long-term bearish for the cryptocurrency world.