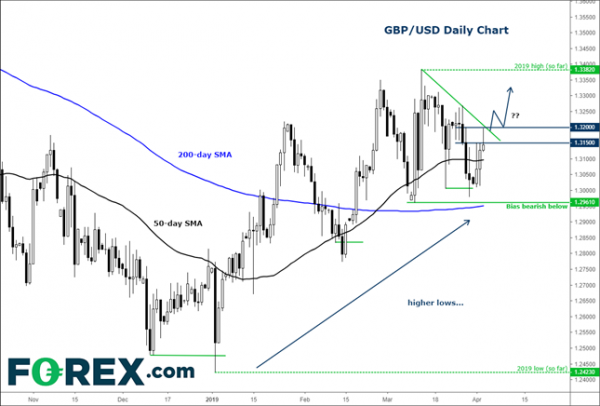 It has been a rather volatile day for the pound, as investors reacted to the latest Brexit headlines and data from both sides of the pond. At the time of writing the GBP/USD was still just about holding in the positive territory.

The latest services sector PMIs from both the UK and US disappointed expectations, with the former falling below the boom/bust level of 50.0 to 48.9 from 51.3 previously. The US ADP private sector payrolls report also disappointed, suggesting that the official jobs report may miss expectations on Friday.

As far as the Brexit situation is concerned, well the stalemate continues. However, hopes have risen for a longer delay and an even softer exit from the EU following Theresa May’s decision for cross-party discussions on trying to solve the deadlock. She will be speaking with the leader of the Labour Party, Jeremy Corbyn, tonight. It is not certain yet if they will agree on anything concrete. But given Corbyn’s desire to keep the UK in a customs union with the EU and the parliament’s rejection of a no-deal Brexit, the UK may well be headed towards a very soft Brexit or no Brexit at all if the eventual deal goes to a public vote in the end. So, in the short-term outlook, the pound could gain some ground against her major rivals, but the longer-term outlook will ultimately be determined by the eventual outcome of the Brexit process.


Form a technical point of view, the GBP/USD is currently positive on the week and therefore the month (given that the month of April has just begun this week), so the path of least resistance is to the upside for the time being. It is interesting to observe that the cable has been printing several higher lows since it bottomed out at 1.1244 earlier this year, when its attempted move below last year’s low of 1.2478 proved to be short-lived. Since then, the sellers have continuously been trapped, even despite raised Brexit uncertainty. Thus, we have no technical reason to believe the cable will drop sharply until there is an actual breakdown in the market structure of higher highs and higher lows. The most recent low that preceded the rally to a fresh high for the year was made at 1.2952 last month. The cable must break this level for the technical bias to turn bearish. Until and unless that happens and given the prospects of an even softer Brexit (or no Brexit at all) we prefer looking for bullish than bearish setups on the cable, especially if the short-term bearish trend breaks at 1.3200.