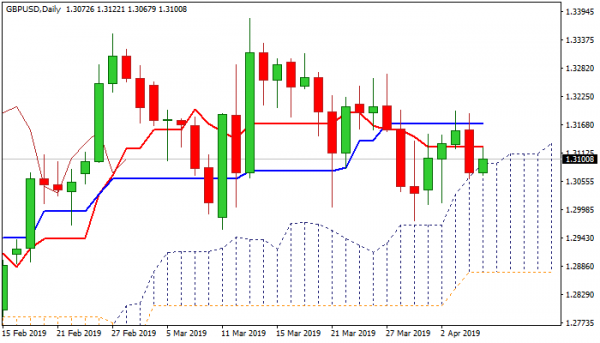 Cable moves higher in early Friday’s trading following previous day’s 0.65% fall. Lack of agreement in PM May’s talks with opposition frustrated bulls which repeatedly failed to close above converged 20/30SMA (1.3166/69) as rallies stalled ticks ahead of 1.32 barrier. On the other side, rising thick daily cloud continues to underpin and keep the downside protected for now, despite a brief probe into cloud overnight. Daily studies remain in mixed mode but holding negative momentum that would keep the downside vulnerable. The pair will be focusing on fresh Brexit news which proved to be pound’s key driver. EU top official announced on Friday that the bloc is ready to offer 12-month Brexit delay after UK parliament approves the deal and EU leaders verify scenario on next week’s summit, that would offer fresh support to sterling. Focus on Friday turns towards key event of the day – US jobs report. US Non-Farm payrolls are forecasted for 175K new jobs created in March, compared to last month’s shocking 20K, Average Hourly Earnings are expected to stay firm and unchanged at 3.4% and US unemployment also unchanged at 3.8%. Near-term action will be looking for direction signals on violation of pivotal supports/resistances. Daily cloud top (1.3091) marks initial support, guarding significant points at 1.3028 (trendline support) and 200SMA (1.2977), loss of which would generate strong bearish signal. Conversely, sustained break above 20/30SMA’s and 1.32 barrier would signal stronger bullish acceleration.