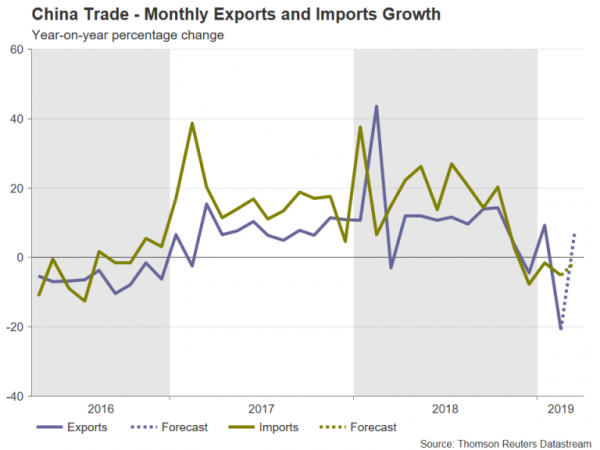 Economic data will take a backseat in the coming week as the biggest risk events that are being anticipated are the European Central Bank’s policy meeting and an emergency summit by the European Union to discuss the Brexit crisis. But while UK and EU politics may grab most of the headlines, there will also be some key releases to keep an eye on. Export numbers out of China and Germany will be watched to assess global trading conditions as trade tensions ease. UK monthly GDP figures and US price indicators will also be important, while the minutes of the Fed’s March policy meeting should attract some attention too.

Chinese exports expected to bounce back

Shipments from China slumped by 20.7% year-on-year in February, fuelling fears that the trade dispute with the US is starting to significantly damage the country’s trade prospects. However, the poor performance was partially attributed to the timing of the Lunar New Year holiday compared with last year and exports are expected to post a decent rebound in March. Exports are forecast to have increased by 7.3% y/y in March, though imports are predicted to have slipped further for a fourth straight month, declining by 1.3% y/y.


The trade numbers are due on Friday, and ahead of that, inflation data will be watched, with both the consumer price index (CPI) and produce price index (PPI) due on Thursday.

The Australian dollar is likely to bear the brunt of any shocks in the trade data, though markets would possibly see through any negative surprises given the progress being made in the trade negotiations between the US and China in recent weeks.

Machinery orders out of Japan will be another important gauge for global trade on Wednesday. Core orders – a forward looking indicator for capital spending – fell by 5.4% y/y in January. Another big drop in February would further darken the outlook for corporate Japan. A quarterly survey by the Bank of Japan published earlier this week showed business sentiment deteriorating in the first three months of the year amid a continued slowdown in Japan’s main trading partners.

In addition to machinery orders, corporate goods prices for March will also be released on Wednesday. A weak set of figures from Japan could act as an additional drag on the yen, which has been under pressure this week on the back of improving risk appetite, led by growing expectations that the US and China are closing in on a trade deal.

Spotlight on May-Corbyn talks ahead of emergency EU summit

Sterling is headed for another rollercoaster week as the Brexit crisis shows no sign of abating and the extended deadline for Britain to leave the EU looms on April 12. After two rounds of indicative votes for Parliament to set the Brexit agenda failed to produce a majority on any of the alternative options, the UK prime minister, Theresa May, decided to hold talks with the Labour opposition leader, Jeremy Corbyn, to try and find a way forward that could win Labour support.

May has until April 10, when EU leaders will gather for an emergency summit, to reach some sort of an agreement on a revised Brexit deal with Corbyn. If May accepts Labour demands for a customs union and a deal is passed, the UK would be in a position to leave on May 22 – a day before EU member states elect new members of the European Parliament. But if the two leaders are unable to come to any agreement, a longer extension that could involve the UK taking part in the upcoming election would become likely. However, another extension is not guaranteed as the EU may decide it’s had enough of British lawmakers’ indecisiveness and accept that a crash UK exit may be the only way out from the crisis. Hence, a disorderly Brexit cannot be completely ruled out even after UK MPs moved swiftly this week to pass a legislation that blocks the government from leaving without a deal and requires it to seek further extensions to Article 50 if there is no consensus on the Withdrawal Agreement.

The pound is likely to remain choppy within its current range of $1.2950-$1.3350 if next week’s events don’t provide any clarity for investors as to where Brexit is headed. However, if it starts to become inevitable that the UK would have to stay in a customs union in order to break the impasse, an upside break above this range would be an easy feat for the pound.

There could be a more muted response, though, to a barrage of UK data out on Wednesday. February numbers on GDP growth, industrial and manufacturing output and trade could prove a temporary distraction for traders. But with signs that the all-important services sector is taking a significant hit from the ongoing Brexit uncertainty, any weakness in the monthly GDP readings could weigh on sterling.

ECB to stand pat in April

After catching markets off guard by pushing back the projected timing of a rate hike as early as at the March meeting, the ECB’s April meeting will probably be a quieter affair with no change in policy or the forward guidance expected. Nevertheless, there will still be plenty to keep investors interested. The surprise big upward revision in the Eurozone’s services PMI in March may positively influence policymakers’ outlook and analysts will be on alert for the possibility of less cautious views on the economy by Mario Draghi in his post-meeting press conference.

Markets will also want to see whether there was any discussion of introducing a tiered system for the ECB’s negative deposit rate, which has been having a damaging effect on Eurozone banks’ profitability. While excluding some banks’ cash reserves from being charged negative rates would be good for the health of the banking system, markets could perceive it as a dovish move as it would indicate a prolonged period of below zero deposit rate.

The ECB will announce its decision on Wednesday and the euro will be on standby for more dovish tilts by the central bank. In addition to the policy meeting, euro traders will also be watching German February export figures and the Eurozone sentix index for April on Monday, as well as February industrial production numbers for the region on Friday.

US inflation and Fed minutes may struggle to excite the dollar

The US economic calendar will be one of the busier ones next week, though the data may fail to generate much of a response in the forex market. Factory orders will start the week on Monday. After managing only meager growth of 0.1% month-on-month in December and January, factory orders are forecast to have reversed course in February to decrease by 0.6%.

On Wednesday, attention will shift to the FOMC minutes of the March meeting and on inflation as the CPI report is released. Headline inflation is expected to have accelerated to 1.8% y/y in March from 1.5% before, while the core rate is forecast to have held steady at 2.1% y/y.

Any rise in the CPI rate from current levels is unlikely to alarm the Fed, especially as their targeted price measure, the core PCE price index, remains contained around 2%. The Fed will probably reinforce its neutral stance in its March meeting minutes when FOMC members signalled they’re not planning to raise rates at all in 2019. The language coming from Fed policymakers has been fairly consistent in recent months, so no surprises are being anticipated from the minutes. As a result, the US dollar is more likely to be driven by trade headlines and risk sentiment.

In other data from the US, March producer prices will follow on Thursday and the University of Michigan’s preliminary reading of the consumer sentiment index for April will round up the week on Friday.