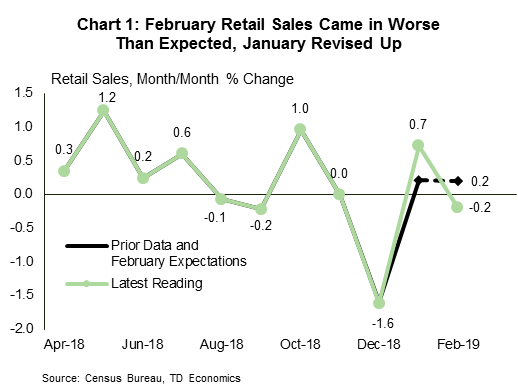 Progress on U.S.-China trade negotiations helped support risk appetite in financial markets this week. Major U.S. stock indices, such as the S&P 500 – up 2% on the week – had a strong run. As money flowed into equities, Treasuries sold off, boosting bond yields, particularly for longer maturities. This helped keep the spread between long-term and short-term yields in positive territory, easing some of last week’s anxiety about any recession signal from the yield curve’s inversion.

Economic data, though not entirely positive, was broadly supportive. February retail sales undershot market expectations, falling by 0.2% m/m, instead of rising by a commensurate amount. The miss on the sign in the headline print seemed like a cruel April Fools’ joke. But, the hefty upward revision to January mitigates the downside to 19Q1 spending (Chart 1). Proving more constructive was a strong bounce-back in auto sales in March to 17.5 million, after two consecutive monthly declines. But, even with a decent showing in March, first-quarter consumption growth is unlikely to surpass 1% annualized. This soft performance is really no surprise given the drag from ‘residual seasonality’ and the government shutdown.

Lower interest rates and a steady Fed, together with a robust labor market, should continue to shore up spending in the months ahead. On the employment front, the payrolls report did not disappoint, with job gains making a comeback in March (Chart 2). The economy added 196k new jobs last month, while the unemployment rate managed to hold on to a low 3.8%. In addition, the prior two months of data were revised up by 14k combined. Other details were less rosy, such as the participation rate ticking down 0.2 ppts to 63% and wage growth easing a touch.


The March jobs data confirms that the weak February print was but a speed bump. That said, we still expect a tightening labor market to curtail the pace of job gains to below 150k per month on average through the remainder of 2019. This is slower than last year, but still decent – a theme that aligns with the broader economic narrative of GDP growth slowing to just above 2% this year.

The recent performance of manufacturing and service industries supports this view. The ISM indices have decelerated on a trend basis from last year’s highs, but both remain well in expansionary territory. In March, the two indices diverged, with the non-manufacturing index undershooting expectations (-3.6 points to 56.1) and the manufacturing index surprising on the upside (+1.1 points to 55.3). Still, both signal an economy expanding at a healthy pace.

The resilience of the U.S. manufacturing sector has been remarkable, given the slump in activity elsewhere. Although manufacturing improved in China and a few regional partners in March, it remained in contraction in the Euro Area. The Old Continent is going through a rough patch, and, with economic growth expected to clock in at a low 1.3% this year, it remains a source of downside risk to the global economic outlook (see here).

It was a risk-on week in Canadian financial markets, as optimism about global growth and prospects for a trade deal between China and the U.S. boosted equity prices and brought bond yields along for the ride. Economic data was relatively sparse, but the much awaited labour force survey landed with a thud, showing job growth returning to earth after several months of gravity defying gains.

Indeed, the seemingly-unflappable Canadian job market wobbled in March, shedding 7.2k jobs. The pullback in job was matched with a similarly modest outflow of people from the labour force (-11.3k), leaving the unemployment rate unchanged at 5.8%.

Looking across the country, job losses were concentrated in central Canada, with both Quebec and Ontario shedding jobs after strong growth in the prior two months. In Ontario, the losses were enough to push the unemployment rate up two ticks to 5.9%, while in Quebec the rate fell a tick to 5.2%, as people left the labour force.

While disappointing perhaps, the data was ripe for a reversal. Job growth in the preceding two months seemed completely divorced from the broader economic narrative of slowing activity. Even while losing jobs in March, the three month average for gains is 38.5k (or 2.5% annualized). Judging the threshold for job growth required to keep the unemployment rate steady is more difficult these days given the acceleration in Canadian population growth, but there is little doubt the recent trend has been above it. Job growth in the neighborhood of 10k a month is still a good estimate for trend, and unless growth slows below this rate, we see little reason to worry about the health of the labour market.

Another reason to look past the headline job number is that total hours worked went in the opposite direction in March, rising 1% and partially reversing three months of weakness. By this metric, the labor market performance has been less impressive over the start of this year, but more consistent with a modest pace of economic growth.

Bank of Canada governor Poloz’s speech this week in Iqualiut offered yet another reason for the seeming disconnect between the job market and economic data, noting that growth has been concentrated in service-industries where measurement is more difficult. This may not be the most satisfying explanation, but it has merit. Nearly 30% of the jobs created over the past year in Canada have been in professional, scientific and technical services – relatively high paying service-sector jobs . This is a positive signal that once through near-term challenges, Canada is adapting to the new economy.

Still, as long as the global outlook remains uncertain, Canada’s trade engine is sputtering, and households highly sensitive to changes in interest rates, the policy stance required to keep us on the straight and narrow is likely to remain accommodative and the overnight rate to stay put at 1.75%.

We look for headline CPI to pick up to 1.9% from 1.5%, reflecting a strong 0.4% seasonally adjusted m/m increase. The main driver is a sharp pickup in gasoline prices (+7.7% m/m). In the core index, we expect a 0.2% m/m print, but on the weak side. OER is likely to moderate this month after its outsized 0.33% m/m gain in the prior month. This should be partially offset by a rebound in core services ex-shelter, allowing overall core services to print a steady 0.2% increase. Core goods prices should normalize after a fairly sharp decline in February, but we are hesitant to expect a strong rebound thanks to weak imported goods prices. Upward tariff-related impacts have likely faded by now as well.

February CPI and our forecast for March suggests that the downward trajectory in core PCE inflation will continue through March. Recall that core PCE disappointed at 1.8% y/y in January, down from an upwardly revised 2.0% in December. We expect core PCE to hold at 1.8% y/y in February (but fall on an unrounded basis) and slide further to 1.7% in March. A slip to 1.7% by February cannot be ruled out.

Housing starts are forecast to remain subdued at a 190k pace in March for a modest pickup from the post-crisis lows of 173k the prior month. Multi-unit starts fell by an annualized 30k in February despite sustained strength in permit issuance which points towards some recovery in March; previous declines of a similar magnitude have seen a 60% correction the following month. However, employment data has shown a sharp decline in construction hours worked through early 2019 and single family permit issuance continues to trend lower, which points towards further weakness ahead.