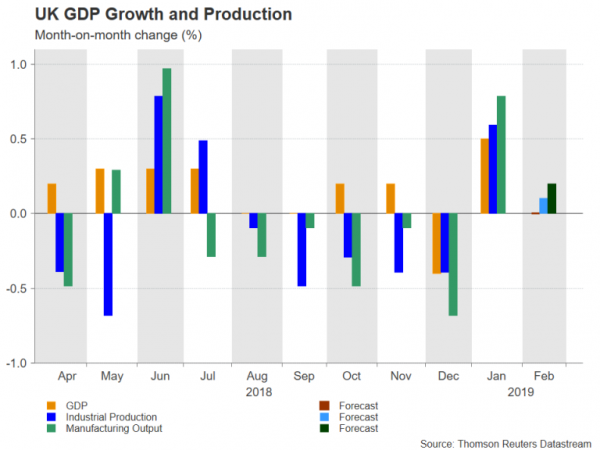 Economic indicators due out of the United Kingdom on Wednesday (08:30 GMT) are anticipated to show GDP growth stalling in February amid the heightened uncertainty around Brexit. But it will be happenings in the Brexit sphere that will once again grab the bulk of traders’ attention. EU leaders will meet for an emergency summit on Wednesday to decide whether to grant the UK another extension to the exit date, otherwise a no-deal Brexit would be the default option when the current extension expires on April 12.

While the UK economy managed to withstand the initial shock and impact of the Brexit referendum outcome in June 2016, the prolonged period of uncertainty and the political chaos that has ensued in Westminster has finally started to weigh heavily on Britain’s growth prospects. That was evident in the latest services PMI from IHS Markit/CIPS which fell to contraction territory in March.


Wednesday’s data is expected to confirm the worrying trend in the dominant services sector with forecasters predicting total UK economic output stood still in February even as industrial production benefited from Brexit stockpiling. The year-on-year GDP picture is expected to improve somewhat, however, rising from 1.4% to 1.7% in February. The manufacturing sector is forecast to have posted month-on-month growth of 0.2% in February, adding to January’s 0.8% gain, while overall industrial output is anticipated to have increased by 0.1%.

Manufacturers and retailers have intensified stockpiling in recent months on fears that a possible disorderly Brexit could result in customs delays at the border, leading to shortages of many goods. For that reason, markets have been unimpressed by the rebound in manufacturing output and any further boost is unlikely to provide the pound much support.

May turns to Labour to push through a Brexit deal

Instead, all eyes this week will be on London and Brussels. British PM Theresa May is desperately trying to find some common ground with Labour leader, Jeremy Corbyn, to forge an amended Brexit deal that could win the support of opposition MPs. May will need to make significant progress in her discussions with Labour in order to be able to persuade EU leaders at an emergency Brexit summit on Wednesday to approve her request for a further extension of Article 50 until June 30.

After Parliament rejected May’s deal for a third time on March 29 – the day Britain was meant to leave the EU – the current extension is due to expire on Friday. However, despite some doubts whether the EU will grant the UK a second extension if May fails to make a convincing case, markets are still pricing a very low probability of a no-deal Brexit.

The reduced odds of a no-deal scenario, following MPs’ intervention to block the government from going down that road, have kept cable supported above its 200-day moving average in the $1.2975 region. But with chances of a near-term breakthrough of any sort still looking fairly remote, that support barrier could easily be broken if talks between May and Corbyn collapse and the EU refuses to provide a second extension. Such an outcome would open the way for the $1.28 handle, which is the 61.8% Fibonacci of the 1.2436-1.3383 upleg.

The more probable outcome, however, is that the EU will approve another delay to the Brexit deadline. The question is, whether it will be another short one, to June 30, or a much longer extension that could keep the UK in the EU until at least the end of the year, which would likely require the country to participate in upcoming European Parliament elections.

Another extension would ease the immediate downside pressure on the pound and help it recover above the 50-day moving average, currently at $1.3093. But for the currency to advance substantially beyond this point in the short term, traders would need to see positive headlines coming from the talks between May and Corbyn. Signs that the two leaders are able to narrow their differences on their vision of Brexit could propel the pound above the $1.33 level, bringing the March top of 1.3383 back into view.