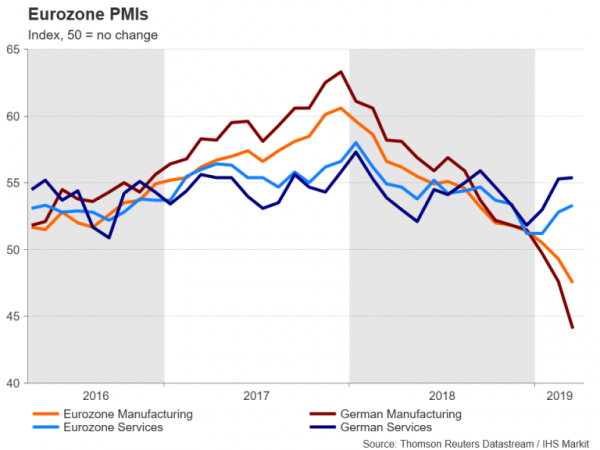 The European Central Bank will announce its latest policy decision on Wednesday at 11:45 GMT, to be followed by a press conference by President Mario Draghi at 12:30 GMT. Unlike the March gathering when the Bank made significant adjustments to its policy and forward guidance, the April meeting is looking like it will be a less eventful one, with no changes being anticipated. That’s not to say the euro is safe from any dovish remarks by Draghi, as the single currency attempts to rebound from its recent lows.

At the March meeting, the ECB performed a dramatic U-turn, making a dovish pivot just a few months after ending its quantitative easing program in December. The Bank announced a new round of targeted longer-term refinancing operations (TLTRO-III) aimed at boosting lending across the euro area. But the biggest reaction was to the surprise decision to modify the forward guidance on interest rates.

Having previously signalled a rate hike some time after the summer of 2019, the ECB is now not expecting to lift rates before the end of the year. The euro touched a 20-month low of $1.1174 in the aftermath of the meeting, and after see-sawing, came close to hitting that trough again last week as investors continue to lower their outlook on the Eurozone economy.

European exporters, particularly German ones, are still struggling amid a slowdown in China and anxiety over a hard Brexit. Also casting a shadow over businesses is the threat the US will set its sights on the European Union for a trade fight once the dispute with China is resolved.

However, while the manufacturing sector continues to act as a major drag on the economy, there are some signs that services activity is picking up as domestic demand holds up considerably well amid the broader slowdown. IHS Markit’s services PMI for March showed an unexpected strong bounce, rising for the second straight month.

Will Draghi give markets cause for optimism?

But that’s unlikely to be enough for policymakers to upgrade their views just yet and Draghi is expected to maintain that the risks to the Eurozone economy are tilted to the downside. If Draghi gives investors little reason to be optimistic and reiterates that the timing of a rate hike could be pushed back again if conditions worsen, the euro would likely come under pressure, cutting its recovery short.

Tiered deposit rate could be long way off

On the other hand, a somewhat more confident ECB chief could help push euro/dollar above the 1.1283 resistance. Further upside is possible if Draghi downplays the likelihood of introducing a tiered system for the ECB’s negative deposit rate, which has been hurting banks’ profitability in the euro bloc. Euro/dollar could climb above the 200-period MA just below the 1.13 handle before aiming for the 50% Fibonacci at 1.1315 if the prospects for a tiered deposit rate start to recede.

The latest reports suggest discussions for a tiered deposit rate are still only at staff level and it could be several months before any proposals reach the Governing Council to be debated. By which point, the Eurozone economy could already be rebounding and with Draghi’s term coming to an end at the end of October, such a policy may be up to the next president to decide.