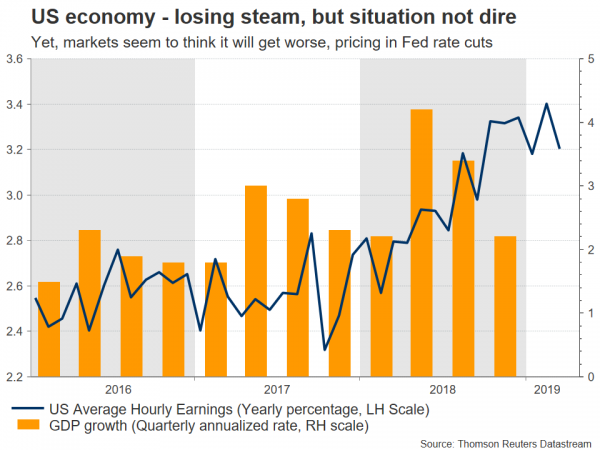 The two main releases for the dollar this week will be the US CPI data and the minutes from the Fed’s March meeting, due out on Wednesday at 12:30 and 18:00 GMT respectively. Attention could fall primarily on the inflation data, where forecasts appear overly optimistic – thereby posing a downside risk for the US currency. In the big picture, markets are quietly pricing in Fed rate cuts. Yet, that has failed to substantially weaken the greenback, mainly because other major currencies still lack appeal.

Whether correct or not, markets appear increasingly convinced that the Fed will be cutting rates before long. According to the Fed funds futures, the probability for a quarter-point rate cut by December now rests near ~70%, a number that has been rising recently. This stands in sharp contrast with remarks by Fed officials, who insist that rates will stay unchanged for now, and that they would consider a cut only if the economy took a turn for the worse.


Down, but not out

The economy is indeed slowing down – albeit not dramatically. Retail sales and wage growth both disappointed lately, implying that the American consumer may be experiencing a soft patch, which is an ominous sign for future growth. Still, business surveys like the PMIs remain at healthy levels, consistent with solid GDP growth in Q1, so the situation isn’t dire either. Investors seem to believe the environment is likely to worsen further as the year progresses, leading the Fed to open the stimulus taps once more.

The inflation data for March, due on Wednesday, will provide the latest piece in this puzzle. The headline CPI rate is projected to have risen to 1.8% in annual terms, from 1.5% in February, while the core rate is expected to have held steady at 2.1%. Overall though, the risks surrounding these forecasts may be tilted to the downside, since the Markit PMI surveys for March showed that prices charged by firms rose at the slowest pace since 2017. Any disappointment could further amplify expectations for Fed cuts, and hence weigh on the dollar.

A few hours later, the minutes from the Fed’s March meeting will attract attention. This was the meeting where policymakers signaled they don’t intend to raise rates this year, so the minutes will likely contain an air of caution. That could also weigh on the greenback, but perhaps not much, as markets already have a good sense of where the Fed stands.

Only game in town

In the big picture, even though expectations for Fed easing have been growing, one would hardly know just by looking at a chart of the dollar. The reserve currency has held up very well, mainly because its other major peers – notably the euro, pound, and yen – aren’t attractive enough. The European economy is in much worse shape than the US, the pound continues to be tormented by Brexit uncertainties, and Japan offers interest rates so low that the yen can’t gain traction without a major risk-off event.

Until one of these narratives starts to change, especially the European growth story, the dollar may remain ‘the only game in town’ and is unlikely to experience massive downside even if Fed rate-cut expectations grow a little further.

Looking at dollar/yen technically, initial support to declines may be found near the 50-day simple moving average (SMA), currently at 110.77. A downside break could open the door for a test of the March lows near 109.70.

On the other hand, immediate resistance to advances in the pair could come from the 111.80 – 112.10 territory. If the bulls manage to overcome it, the next obstacle may be around 114.0.