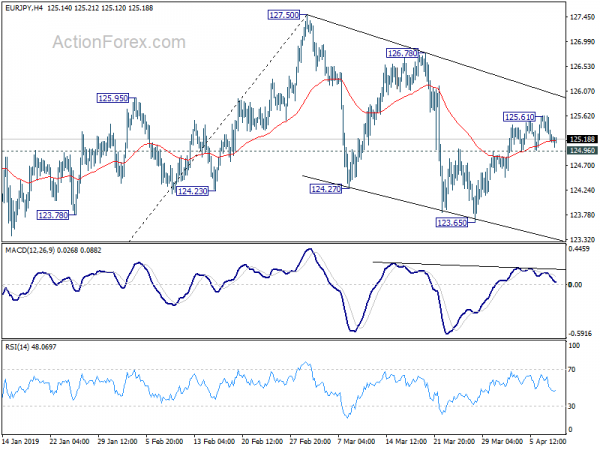 The forex markets are relatively steady in Asian session today. For the week, Yen is so far the strongest, following mild risk aversion. Investors are concerned that the US is going to escalate trade war with EU, while they haven’t even finished negotiations with China. The punitive and retaliation tariffs of US and China are staying there as the talks drag on. Extra tariffs between US and EU will be another huge blow to the global economy.

Australian Dollar is currently following as the second strongest for the week. It quickly reversed earlier loss today after RBA Deputy Guy Debelle didn’t bring additional dovishness with his speech. Economists continue to expect two RBA cut this year. But with the first one expected in August, it’s a bit early for RBA to turn full-blown dovish yet.

Dollar is currently the weakest one for the week, together with Swiss Franc. Selloff in US stocks this week, with 10-year yield back below 2.5 handle, is weighing down on the greenback. Sterling is mixed as EU is expected to grant UK and one-year flexible Article 45 extension. Euro is also mixed while ECB announcement might bring little news.


Technically, downside momentum in Dollar diminished somewhat after yesterday’s selloff. But more downside in Dollar remains in favor against Euro and Yen. Also, as Yen might gather some more strength, 124.96 minor support in EUR/JPY will be in focus. Break will indicate completion of rebound from 123.65 and bring retest on this support.

In a letter to European Council member, President Donald Tusk urged EU27 states to considering UK’s request for Article 50 extension at the meeting on Wednesday, to “do our utmost” to avoid disorderly Brexit.

However, Tusk noted that there is “little reason to believe” that ratification of the Withdrawal Agreement would be completed by the end of June. He also warned granting extension to June 30 would “increase the risk of a rolling series of short extensions and emergency summits, creating new cliff-edge dates.”

Thus, Tusk proposed a “flexible extension”, which would last only as long as necessary and no longer than one year. UK is free to leave “whenever it is ready”. And, importantly, a long extension would provide more certainty and predictability, while UK is allowed to rethink its Brexit strategy.

Tusk also laid out the conditions for the extension: no re-opening of the Withdrawal Agreement; no start of the negotiations on the future, except for the Political Declaration; the UK would have to maintain its sincere cooperation also during this crucial period, in a manner that reflects its situation as a departing member state.

EU said that both sides reaffirm the strength of their Comprehensive Strategic Partnership, their resolve to work together for peace, prosperity and sustainable development and their commitment to multilateralism, and respect for international law and for fundamental norms governing international relations, with the United Nations (UN) at its core. The two sides commit to uphold the UN Charter and international law, and all three pillars of the UN system, namely peace and security, development and human rights.”

In short, the two sides pledged their joint commitment to uphold and update rule based orders, including WTO reform. Also bilateral talks will be setup for industrial subsidies. Both promised to have no forced transfer of technologies as price for investment. And both commit to create a level playing field.

In a speech, Fed Vice Chair Richard Clarida said neutral interest rates appear to have fallen in the US and abroad. And, “this global decline in r* is widely expected to persist for years”. He emphasized the importance of the trend as “all else being equal, a fall in neutral rates increases the likelihood that a central bank’s policy rate will reach its effective lower bound (ELB) in future economic downturns. ” And that in turn “could make it more difficult during downturns for monetary policy to support household spending, business investment, and employment, and keep inflation from falling too low.”

Clarida pointed to another key development in decreasing responsiveness of inflation to resource slack. That is, “short-run Phillips curve appears to have flattened, implying a change in the dynamic relationship between inflation and employment”. He warned that a flatter Philips curve increases the cost of reversing unwelcome increase in long-run inflation expectations. And “a flatter Phillips curve makes it all the more important that longer-run inflation expectations remain anchored at levels consistent with our 2 percent inflation objective.”

Speaking to the parliament, BoJ Governor Haruhiko Kuroda said the central bank isn’t seeking to push up inflation alone. Instead, it’s aiming at creating to situation where wage and employment conditions improve with corporate profits too. That is, creating a “positive economy cycle”.

Meanwhile, Kuroda added the 2% inflation target helps in long-run currency stability. But for now, inflation is likely hover around 1% since wages growth is not fast enough yet.

Separately, Finance Minister Taro Aso also told the parliament that pushing up inflation alone “won’t do any good” without improvement in people’s livelihoods.

RBA Debelle: Lenses of labor market and GDP in sharp contrast, business surveys sit in between

Australian Dollar rebounds after initial selling as speech of RBA Deputy Governor Guy Debelle echoed much of recent communications. There was no extra dovishness in his comments.

He noted that the weaker than expected GDP growth in second half of last year was primarily due to considerable slower growth in consumption. The main explanation is low growth in household income, and an increasing expectation that it is likely to remain low

However, other parts of GDP have evolved broadly as we had expected. Business investment outside mining has been “growing at a rate”. Exports have “continued to grow as expected”. Residential construction is at a “historically high level”. Also, labor market has been “surprisingly strong”.

Debelle noted that “the two lenses on economic growth provided by the labour market and the GDP data are in stark contrast”. Meanwhile, “a third lens, in the form of business surveys, sits in between the two”. And he noted that “the tension highlighted by these different lenses on economic growth is of crucial importance. Hopefully we will get some resolution of this tension in the coming months with the incoming flow of data.”

In the World Economic Outlook report, IMF revised down global growth forecasts as weakness in the second half of 2018 is expected to persist into the first half of 2019. IMF expects slowdown in 70% of world economy. Global growth would dropped from 3.6% in 2018 to 3.3% in 2019, revised down by -0.2%. There were negative revisions for several major economies including the euro area, Latin America, the United States, the United Kingdom, Canada, and Australia.

Nevertheless, IMF still expects growth to pickup again in second half of the year. There will be support from “significant monetary policy accommodation by major economies”. Fed, ECB, BoJ and BoE have “all shifted to a more accommodative stance”. Meanwhile, China has ramped up its fiscal and monetary stimulus. Outlook for US-China trade tensions has also “improved as the prospect of a trade agreement take shape”. “Global recession is not in the baseline projections,

However, IMF maintained “there are many downside risks”, including trade tensions that could “could flare up again and play out in other areas (such as the auto industry), with large disruptions to global supply chains.: Growth in Eurozone and China “may surprise on the downside”. Brexit risks remain “heightened”.

Here is a summary of the growth forecasts (comparing with January forecasts):

ECB rate decision and press conference are two major focuses in a busy day. UK GDP and productions, US CPI and FOMC minutes will also be featured. ECB will keep monetary policies unchanged, without a doubt. There shouldn’t be any change in ECB’s plan on forward guidance too. That is, it will indicate to keep interest rates unchanged at least through the end of 2019. Details regarding the TLTRO III should be released later in June, rather than at this meeting.

Though, markets might be eager to know more on two topics. Firstly, March meeting minutes revealed that some members indeed favored to extend forward guidance until first quarter of 2020. President Mario Draghi would be asked to elaborate more on the discussions. Secondly, members’ comments over the past weeks have given rise to the possibility of a move to a “tiered deposit rate” system in order to save bank profitability.

UK GDP, trade balance, industrial and manufacturing production, and construction output will be featured in European session. Later in the day, US will release CPI and FOMC minutes.