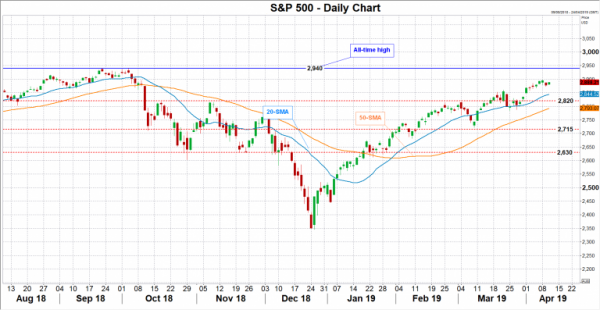 The time for the earnings season is coming again this Friday but unlike preceding releases, the S&P 500 companies are expected to have had a negative ride year-on-year in Q1 2019 for the first time since Q2 2016, with Refinitiv data suggesting a 2.5% decline in earnings per share. Another difference is that traders are feeling both nervousness and excitement as the unsurprising growth downgrade by the IMF earlier this week confirmed that something is wrong with the global economy, while in Wall Street, US stock indices look to be nearing an edge.

Markets are well informed that trade issues with China and the US, the Brexit nightmare and a slowing Europe are the primary reasons why the global and hence the US economy may lose steam in the near future. Still, despite the ups and downs in figures, the US is relatively in good shape given the uncertainty elsewhere in the world. Besides the suspicious tiny increase in February, US employment growth reached the highest in a year in January before returning to normal levels in March. The unemployment rate remains the lowest in a decade, while the wage growth did not rise dramatically in the first quarter after all. The Fed’s decision to halt its rate hiking plans this year was also a relief to businesses and could juice firms’ profits as long as the US data suggest steady interest rates.

While diminishing support from the 2017 tax cut program could excuse negative earnings, the above evidence recommends that the results may not drop as deep in the red as forecasts suggest. Yet, for Wall Street to blow itself up, business executives need to share an encouraging forward guidance, which may simply not occur this time as the recent US threat of $11 billion tariffs against EU products indicates worryingly that Washington is not feeling pressure to change its aggressive trade stance against Europe or even China. Meanwhile in Europe, Brexit remains a headache to US multinationals as the EU-UK agreement to postpone the exit day to October 31 has just extended the uncertainty further on the horizon. Italy is another dark spot and a key threat especially after the finance minister admitted that the budget deficit could hit above 2.0%, violating the government’s agreement with the EU.


The location of the S&P 500 itself provides further conviction that the bears have more chances to retake control. Although the upward steep pattern from the December’s 20-month lows is considered a sign of continuity, the market is not far from its record high levels reached in September, nor is the Dow Jones, creating thoughts that space for improvement is limited before selling action comes into play again and hence profit taking may be more suitable. In such a case, a worse-than-expected earnings performance would match the speculation, letting the price to decline towards the 2,820 former resistance area. Breaking this level, support could be next found between 2,715 and 2,630.

In the positive scenario, a stronger earnings season accompanied with hopes of a brighter economic future would add more sparkle to stocks, lifting the index up to previous all time-highs around 2,940 or even above 3,000.

Turning to the US30 (Dow Jones), the bearish doji star around 26,400 and the following lower candles could be interpreted as a warning of a potential trend reversal as was the case back in October. If the data disappoint, the 50-day moving average (currently at 25,736) could come on the radar ahead of the 25,200 and 24,800 support levels. Deeper, 24,400 may be a bigger challenge for the bears.

Alternatively, if the doji proves an anomaly, with the price jumping above it, all eyes will shift up to the 26,951 record high.

In brief, the outcome of the earnings releases may not be as bad as forecasters believe, though with major US stock indices trading near record highs and global headwinds feeding gloomy thoughts, a sell-off is possible.