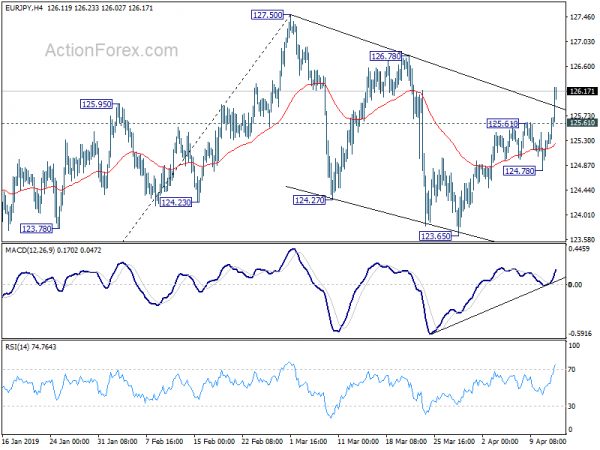 Euro jumps broadly in Asian session today, partly by extended rebound in EUR/AUD, EUR/CAD, and more importantly EUR/CHF. The common currency has clearly left behind the mild dovishness of ECB earlier this week. EUR/JPY also resumed recent rise thanks to broad based weakness in Yen. Stocks markets are mixed but resilience in treasury yields is pressuring the Japanese currency. US 10-year yield close above 2.5 handle overnight and there is prospect of German 10-year yield turning positive again before weekly close.

Dollar is softer after comments from Fed officials, reaffirmed the patience stance. A key message was from Bullard that normalization of monetary policy has completed successfully. It’s seen as the consensus position among Fed policymakers. This reaffirmed that Fed’s default position has changed. That is, before the last hike in December, when there was nothing wrong with data, Fed continued rate hikes. Now, if there is nothing wrong with data, upside or downside, don’t move. Kashkari also reminded the markets that Fed has a “symmetric target” and inflation could be allowed to run above 2%.

St. Louis Fed President James Bullard said if economy evolves as expected, current interest rate will be appropriate through 2019. Balance sheet reduction program will end this autumn. “These events mark the end of monetary policy normalization in the U.S.”

Bullard said the normalization campaign has been “largely successful”. Nominal short-term interest rates have been raised from near-zero levels, and the size of the Fed’s balance sheet has been reduced as the economic expansion has continued.

Going forward, the FOMC may elect to adjust monetary policy going forward. However, Bullard said that will not be “part of an ongoing normalization strategy”. Adjustments will be “in response to incoming macroeconomic data”.

On yield curve inversion, Bullard said “yield curve information is not infallible, and inversion could be driven by other factors unrelated to future macroeconomic performance”.”Nevertheless, the empirical evidence is relatively strong. Therefore, both policymakers and market professionals need to take the possibility of a meaningful and sustained yield curve inversion seriously.”

Fed Kashkari: We should really live the symmetric inflation target

Minneapolis Fed President Neel Kashkari noted that Fed “officially have a symmetric target” on inflation. Actual inflation has “averaged around 1.7%” for the past seven years, which was below the 2% target. Therefore, “if we were at 2.3% for several years that shouldn’t be concerning.” He also emphasized that “we should really live the symmetric target and not tap the brakes prematurely.” Thus, “this is why I’ve been arguing for more accommodative monetary policy.

Kashkari also said he’s “concerned” with yield curve inversion. However, he added: “I don’t necessarily believe it causes recessions but i believe it’s giving feedback that monetary policy is close to neutral today. We don’t want contractionary monetary policy unless we have good reason. We should be careful not to end the expansion.”

In the parliament, Prime Minister Theresa May insisted that UK can still pass the Brexit Withdrawal Agreement by May 22 to avoid taking part in European parliament elections. And it can still leave EU by the end of next month. May also emphasized the important of cross-party negotiations with Labours and she hoped to reach an agreement in the coming days. May urged MPs to “use the opportunity of the recess to reflect on the decisions that will have to be made swiftly on our return after Easter. And let us then resolve to find a way through this impasse.”

BoE Governor Mark Carney said with the flexible Article 50 extension till October 31, there was now a “window of time” to forge consensus. And, “we will see how that time is used”. “Right up until yesterday it could be argued that the UK had run out of time to forge that consensus. There are cross-party talks to try to find that, and that may take some time,” he added.

BoJ Kuroda: Global economy will recover in second half of the year

BoJ Governor Haruhiko Kuroda said that global economy would recover in the second half as he arrived for the G20 finance ministers meeting in Washington yesterday. He said, “our baseline scenario is that the global economy will recover in the latter half of this year, and achieve sufficiently high growth next year.”

Also, he defended rule-based multilateral trade system. Kuroda warned that “protectionism benefits neither the United States nor China.” He urged “both countries, as well as each G20 economy, must make efforts to solve problems based on the understanding that free trade under World Trade Organization rules has brought enormous benefits to the global economy.”

Japan-US trade talks to start next week for exchanging views

Japan Economy Minister Toshimitsu Motegi announced today that the first round of Japan-US trade talks will start next week on April 15-16 in Washington. He said he’d intend to exchange view frankly with US Trade Representative Robert Lighthizer. It’s believed that a core topic is Japan’s near USD 70B trade surplus, with nearly two-thirds from auto exports.

Finance Minister Taro Aso reiterated Japan’s intention to “further expand trade and investment between” between the two countries, in a “mutually beneficial manner”. He also pointed to the joint statement made last September. However, Japan has been very clear on its intention to defend the multilateral trade pact TPP that it leads, and US quitted under Trump. Hence, no matter what Japan is going to offer to the US, they won’t be something better than what’s offered to TPP partners.

IMF chief economist Gita Gopinath warned that auto tariffs could be more damaging to the world economy than US-China trade war. She said on the sidelines of IMF and World Bank annual meeting, “we are concerned about what auto tariffs would do to the global economy at a time when we are more in the recovery phase.”

Trade conflicts of the US and others, including China, EU, Canada and Japan could spill over into the auto sector. And that could have severe damage to the global manufacturing supply chains, She warned, “that would actually be far more costly for the world economy than just the U.S.-China trade tensions that we had.”

In the US, the Commerce Department has already submitted Section 232 national security report on auto imports earlier this year. Trump will have until May 17 to decide whether he wants to extend punitive tariffs from steal to auto, and from rival in China to allies in EU, Canada and Japan.

New Zealand BusinessNZ manufacturing index dropped to 51.9 in March, down from 53.7. Eurozone will release industrial production today. US will release import price index and U of Michigan sentiments.

EUR/JPY surges to as high as 126.23 so far today as rise from 123.65 resumed. The development revived that case that corrective fall from 127.50 has completed at 123.65 already. Intraday bias is back on the upside for 126.78/127.50 resistance zone. Decisive break there will resume whole rise from 118.62 spike low. On the downside, below 125.61 minor support will turn intraday bias neutral first. But further rally will remain in favor as long as 124.78 support holds.