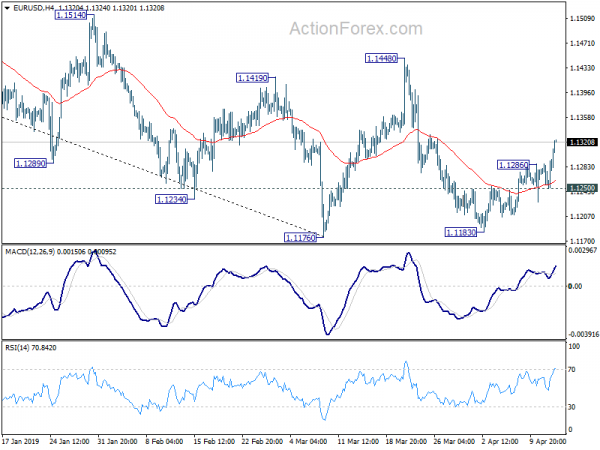 Global market sentiments appeared to be given a strong boost by trade data from China. The much larger than expected rise in export is seen as positive sign of global demand. While there were some weak spots in the set of data, investors are enjoying the rally anyway. The optimism is particular apparent in German 10-year yield jumps through 0.04 handle. US 10-year yield is also pressing 2.55 handle.

In the currency markets, Australian Dollar is the strongest one with tight link to Chinese economy. Euro is second strongest, partly supported by flows linked to Japanese bank’s plans to buy a German aviation finance business. Also, EU is seen as having healthy trade growth with China. Yen is currently the weakest, followed by Dollar. From the data, US is clearly lagging behind in trade due to its down policies.


Strong rebound in China exports suggest recovery in global trade, but US exports to China shrank -31.8% in Q1

Looking at some details, total trade between US and China shrank -15.4% in Q1, comparing with last year, as result of trade war. In particular, imports from US dropped a massive -31.8% yoy in the quarter. On the other hand, imports from Canada jumped 25.9% yoy and imports from Brazil surged 23.8% yoy. Overall trade growth with EU remained healthy.

UK Hammond: Another Brexit referendum is very likely to be put to parliament at some stage

UK Chancellor of Exchequer Philip Hammond said new referendum was “a proposition that could and, on all the evidence, is very likely to be put to parliament at some stage”.

But any new referendum could probably take six months to organize. Thence, time would be tight even though Brexit date is delayed to October 31.

Also, Hammond added: “The government’s position has not changed. The government is opposed to a confirmatory referendum and therefore we would not be supporting it.”

Bundesbank Weidmann: German growth plausible to be just 0.8% this year

Bundesbank President Jens Weidmann warned that German economy could slow sharply in 2019. Growth rate could eventually be lower than 1%. He pointed to IMF’s new projections of just 0.8% for this year and noted that’s entirely plausible. It’s just half the rate of 1.6% Bundesbank projected back in December.

Weidmann also added, “Fiscal policy, as the minister (Finance Minister Olaf Scholz) said, is already expansionary in Germany and we estimate the impact of fiscal policy on GDP for this year to be between one quarter to one half percentage point.”

German Economy Ministry said in the April Economic Report today that the economy continues to show a “mixed picture”. Service and construction are “expanding strongly”. However, “global oriented manufacturing is still in a weak phase”.

PMI was at lowest since June 106 while Ifo reflected a “gloomier mood”. And, “in light of the indicators and the accumulation of global risks, international organizations are predicting a less dynamic, but still upward, global trend.”

Also, “industrial economy is likely to remain subdued in the face of declining foreign demand and high international risks.”

Japan-US trade talks to start next week for exchanging views

Japan Economy Minister Toshimitsu Motegi announced today that the first round of Japan-US trade talks will start next week on April 15-16 in Washington. He said he’d intend to exchange view frankly with US Trade Representative Robert Lighthizer. It’s believed that a core topic is Japan’s near USD 70B trade surplus, with nearly two-thirds from auto exports.

Finance Minister Taro Aso reiterated Japan’s intention to “further expand trade and investment between” between the two countries, in a “mutually beneficial manner”. He also pointed to the joint statement made last September. However, Japan has been very clear on its intention to defend the multilateral trade pact TPP that it leads, and US quitted under Trump. Hence, no matter what Japan is going to offer to the US, they won’t be something better than what’s offered to TPP partners.

IMF chief economist Gita Gopinath warned that auto tariffs could be more damaging to the world economy than US-China trade war. She said on the sidelines of IMF and World Bank annual meeting, “we are concerned about what auto tariffs would do to the global economy at a time when we are more in the recovery phase.”

Trade conflicts of the US and others, including China, EU, Canada and Japan could spill over into the auto sector. And that could have severe damage to the global manufacturing supply chains, She warned, “that would actually be far more costly for the world economy than just the U.S.-China trade tensions that we had.”

In the US, the Commerce Department has already submitted Section 232 national security report on auto imports earlier this year. Trump will have until May 17 to decide whether he wants to extend punitive tariffs from steal to auto, and from rival in China to allies in EU, Canada and Japan.