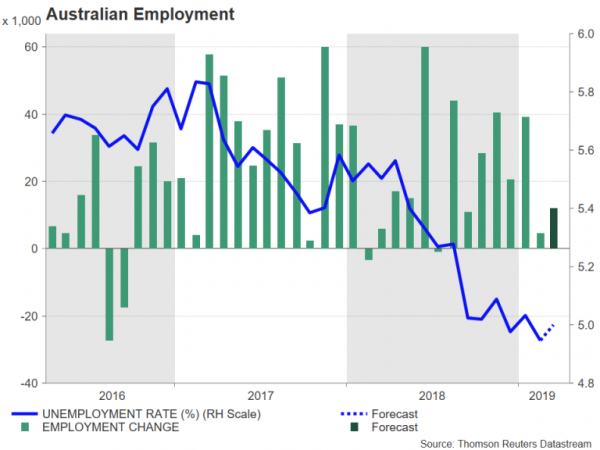 Markets will take a break from central banks and Brexit news over the coming week as the focus moves firmly onto economic fundamentals. Monthly inflation reports will be the dominant release, followed by retail sales estimates. The latest flash PMIs will also be keenly watched amid tepid signs of a recovery in some parts of the world. But while the upcoming data could prove significant in identifying shifting trends, major FX pairs will likely struggle to break out of their recent ranges just yet with too many uncertainties still lurking in the background. A shorter trading week could also contribute to reduced liquidity as many markets will be closed on Friday for the Western Easter celebrations.

Investors pared back some of their expectations around a rate cut by the Reserve Bank of Australia this week, helping the Australian dollar touch 6-week highs versus its US counterpart. The RBA’s deputy governor signalled the Bank did not see an urgency to cut rates just yet and traders will get more insight into policymakers’ thinking when the minutes of the April policy meeting are published on Tuesday. The aussie could stretch the past week’s gains if the minutes further dash expectations of an early rate cut.


Traders will also be paying attention to Thursday’s labour market indicators. Employment is forecast to have increased by 12,000 in March, accelerating from the prior 4.6k, while the jobless rate is anticipated to inch up to 5.0%.

Just as important, if not more, for the aussie will be the latest growth numbers out of China. Data due on Wednesday is expected to show China’s economy grew by 6.3% year-on-year in the first three months of the year. If confirmed, this would represent the slowest growth in decades. However, unless there’s a miss in the data by 0.2 percentage points or more, there’s unlikely to be a market panic as most of the slowdown has already been priced in and there’s already some evidence of a turnaround getting underway.

Released alongside the GDP numbers will be industrial output, urban investment and retail sales figures for March. Industrial output growth is forecast to have quickened from 5.3% to 5.9% y/y in March, pointing to a possible recovery. Investment in urban area is also projected to have picked up pace, rising by 6.3% y/y in the year-to-date to March. Consumer spending probably improved too, with retail sales expected to have risen by 8.4% y/y, compared with 8.2% in February.

The aussie stands to gain from better-than-expected figures out of China as a rebound in Chinese growth would directly boost Australian exports to the Asian giant.

The Reserve Bank of New Zealand surprised markets at its March policy meeting by switching to an easing bias, having maintained a neutral stance at its previous meeting when investors were anticipating a dovish move. The local dollar has been on the backfoot since and there may be more losses to come for the kiwi from next week’s inflation numbers. The annual rate of CPI is forecast to moderate from 1.9% y/y in the fourth quarter to 1.7% in Q1. On a quarterly basis, CPI is expected to have increased by 0.3%.

While a figure of 1.7% would fall within the RBNZ’s target band of 1-3%, all the indications are that the risks to growth and inflation remain tilted to the downside and the RBNZ would prefer to see inflation closer to the middle of its target band.

Sticking to Asia, price measures will also come under the radar in Japan. Core CPI, which excludes fresh foods and is targeted by the Bank of Japan for its inflation objective, fell back to 0.7% y/y in February, straying further away from the 2% goal. Should inflation moderate further, pressure would rise on the BoJ to take fresh action to lift prices. There’s been some mixed messages from the BoJ lately, with policymakers suggesting they could expand their stimulus programme if needed even as they worry about the side effects from a prolonged period of loose monetary policy.

The CPI figures are due on Friday and ahead of that, trade numbers will be watched on Wednesday. Japanese exports slipped by 1.2% y/y in February as a global slowdown and trade tensions weighed heavily on the country’s manufacturers.

Any weakness in next week’s releases would not do the yen any favours. However, the Japanese currency is unlikely to suffer significant downside unless there’s signs of a major shift in BoJ policy.

Focus on flash Eurozone PMIs as euro perks up

A combination of M&A flows and traces of green shoots in the euro area’s largest economies drove the single currency to 2½-week highs against the US dollar this week. The euro could attract additional buying interest if important business surveys out next week provide further proof of an improving economic picture.

The week will start with the German ZEW economic sentiment gauge on Tuesday. The index is forecast to increase from -3.6 to 0 in April, which would make it the highest reading in a year. There could be more positive news on Thursday from IHS Markit’s preliminary PMI readings for April. The Eurozone’s manufacturing PMI is forecast to rise for the first time since July 2018, edging up from 47.5 to 48.0 in April. The services PMI is projected to ease to 53.1 after two months of solid increases. Meanwhile, the composite PMI, which includes both manufacturing and services, is forecast to nudge higher from 51.6 to 51.7, indicating a slight acceleration in overall growth in the euro area.

The other data to keep an eye on next week is Wednesday’s final Eurozone CPI prints for March, although no revision is being anticipated to the initial readings.

Slew of UK economic indicators could offer a break from Brexit

Markets have ignored UK economic developments almost entirely in recent months, centring mainly on the Brexit drama. The logic is that a solution to the political crisis will solve most of the economic issues as well – namely alleviate uncertainty and stimulate business investment. Case in point, sterling barely reacted last week even as the UK services PMI unexpectedly fell into contractionary territory. Another reason is that traders (correctly) believe the Bank of England has its hands tied by Brexit and won’t act again until the landscape clears a little.

That said, it looks like it will be a quiet week on the Brexit front, so traders could gradually turn their attention back to economics. In that sense, the calendar is packed with noteworthy releases, starting with the employment numbers for February that are due on Tuesday. Inflation figures for March will follow on Wednesday, before retail sales for the same month are published on Thursday. It will be especially interesting to see if the upturn in real wages will continue, as that offers a ray of light for the economy, in that it could lift consumption, thus, keeping a floor under growth despite declining investment.

Dollar to seek direction from US data

Economic releases out of the United States next week may not necessarily be very headline grabbing but could nevertheless steer the dollar in a more decisive pattern as investors ponder whether a Fed rate cut in 2019 is on the cards.

First up on the US calendar is the Empire State manufacturing index for April on Monday. The New York Fed’s manufacturing activity gauge will be one of four indicators on US production, with investors hoping for the emergence of an uptrend. The various US manufacturing surveys have so far been mixed so further convincing signs of a pick up in growth will be welcome by dollar bulls. The other data points to monitor will be the official March industrial production numbers on Tuesday, followed by the Philly Fed manufacturing index and the IHS Markit manufacturing PMI on Thursday, both for April.

The other main releases out of the US will be February trade stats on Wednesday, March retail sales on Thursday, as well as housing starts and building permits for March on Friday. Along with the manufacturing data, the retail sales figures will be key in assessing the health of the US economy and hence, driving the greenback. Retail sales are forecast to have returned to growth in March after a surprise drop in February. Analysts are predicting sales to have rebounded by 0.8% month-on-month in March, more than reversing the prior month’s 0.2% decline. The core ‘retail control’ measure is expected to have risen by a somewhat slower pace of 0.5% m/m.

The Canadian economy has been losing steam lately, echoing the situation seen across the globe. Both the labor and real estate markets have cooled, with wage growth slowing and house prices declining, which is a toxic cocktail for consumers and therefore, for the broader economy. Against this backdrop, the Bank of Canada (BoC) has abandoned its tightening bias, but markets are more pessimistic and are leaning towards the prospect of rate cuts, pricing in a ~25% probability for one by December.

The upcoming March inflation print on Wednesday and the February retail sales figures on Thursday will provide the latest piece in this puzzle. Risks seem asymmetric here, as any decline in both inflationary pressures, especially in core CPI, and consumption could amplify the case for BoC rate cuts, and by extent, hurt the loonie substantially. Whereas it’s doubtful whether even a solid uptick in either prices or retail sales would be enough to diminish monetary easing bets and hence boost the currency in a material manner.