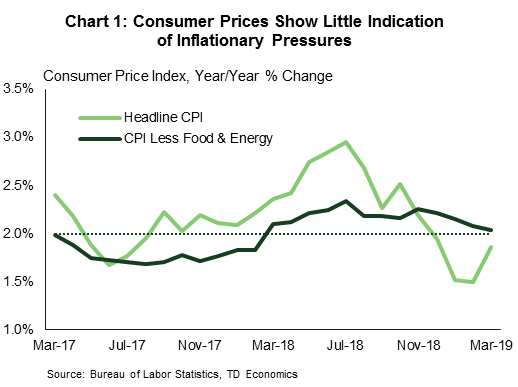 The U.S. economy continues to enjoy its Goldilocks moment – at least with respect to inflation. Consumer prices rose 1.9% year-on-year in March, up from 1.5% in February, largely driven by increases in energy prices (Chart 1). Core inflation came in at 2.0%, and while not the Fed’s preferred metric, is consistent with price pressures running neither ‘too high’ nor ‘too low’.

Several months of muted inflation readings have strengthened the Fed’s decision to keep rates where they are. Minutes of the March meeting showed that board members saw little in the data to prompt a shift in policy. This rhetoric is expected to continue through the end of 2019, with signs of an improving labor market balanced against risks to growth from a struggling global economy. The Fed’s European counterpart (the ECB) on the other hand, while leaving rates unchanged this week, signaled that there could be substantive changes to monetary policy at their next meeting in June. With anemic growth among member countries and lingering policy uncertainty, it signalled a willingness to act to ensure a return of inflation to target and bolster the region’s faltering growth.

On the trade front, relations with China seem to have taken a turn for the better, with talks between high-level officials ongoing. As cooler heads prevail in one trade negotiation however, disputes are heating up in another. The U.S. is threatening to impose tariffs on approximately $11 billion of EU imports. The threat comes after 14 years of litigation at the WTO over subsidies for European aircraft manufacturer Airbus, which America argues puts U.S. based Boeing at a disadvantage. The U.S. emphasizes that this move is independent of current ongoing trade talks with the bloc; but the timing could be seen as an attempt to gain leverage in those negotiations.


Boeing for its part continues to deal with fallout from the grounding of its 737 MAX airliners. There were no commercial orders for the product in March, the first time this has occurred since May 2012. Boeing will reduce production of the jet starting mid-April, while it works to fix flaws with the model which resulted in two fatal crashes. If the production cut lasts to the end of the quarter, they could shave 0.1 to 0.2 percentage points off Q2 GDP growth.

Internationally, Britain’s attempt to leave the EU continues to push past deadlines. This week the EU granted another flexible extension to October 31st for the UK parliament to agree to a deal. The gesture, however, came with strings attached, as the UK will have to hold EU parliamentary elections if they have not ratified the deal by the end of May or risk exiting without a deal on June 1st.

Given these and other uncertainties, the IMF downgraded projections for global growth in 2019 to 3.3%, citing ongoing trade tensions and declining confidence (Chart 2). This brings their forecast in line with our own view published in March. Growth in 2020 is expected to rebound to 3.6%, slightly above our expectation for 3.5% growth.

It was a relatively quiet week. The most notable event in markets was the Canadian government 10 year bond yield rising back above the overnight rate for the first time in a month, ending the recent episode of yield curve inversion. Crude oil prices saw some volatility through the week, but look set to end it a bit higher than where they began. The economic calendar was thin, with only a few bits of new housing data to slake analysts’ thirst. Perhaps the biggest event was the first budget from Ontario’s PC party.

The Ontario budget was bound to be more closely watched than normal given the challenging fiscal position – notably a 2018-2019 budget deficit not too different from the Federal gap, and a commitment to returning to balance. The plan to meet that promise is set to take five years, and, as discussed in our commentary, rests largely on spending restraint. Program spending growth will be held to roughly 1% per year, while revenue growth is forecast to average around 3%. Running revenue growth above spending should gradually shrink the deficit, with a small surplus predicted for 2023-24. Net debt-to-GDP is forecast to rise a bit further in the near term, before bending lower, hitting 38.6% in the final year of the plan, versus 40.2% today.

On the revenue side, the major near-term change is the introduction of a refundable childcare tax credit. The corporate tax rate was left untouched, with the previously-announced accelerated capital cost allowance standing in its place. A cut to the middle income tax rate is still planned, but is forecast for year three of the mandate. Expenditure controls are notable in the education and post-secondary spending categories, with several zero-growth years forecast for the former, and an outright decline this fiscal year for the latter. Healthcare spending is to be held to a sub-inflation pace of 1.6% per year, less than half its recent trend. All told, the budget provides restraint, but with an approach that should have only a modest negative impact on the province’s economic growth outlook.

On the data front, housing was in the spotlight. First up were housing starts. These rebounded to 192.5k annualized units in March after a downwardly revised 166k February report. The rebound was welcome, and was enough to keep the trend north of 200k. Still, the first quarter as a whole marked a very soft start to the year. Starts were down 14% compared with the final quarter of 2018 (Chart 1). This was the worst quarterly performance since 2009, with activity in the single family home segment leading the way.

The softness in February was confirmed by Statistics Canada’s release of building permits data (Chart 2). The value of permits issued fell roughly 6% month-on-month for a second month, taking the series back to early 2017 levels. The main culprit was residential multis (i.e. condos), although permits for non-residential construction were down for a second month. The permits data can be pretty noisy, but when taken together with soft resale activity and the drop-off in starts, it is clear that the housing sector, broadly defined, remains in a soft patch.

Strong March auto sales and a firm rebound in the (core) control group should underpin a solid 1.3% m/m jump in retail sales, following a 0.2% decline in February. Headline sales should also be supported by the ongoing acceleration in gasoline prices, which we expect to be reflected on a firm 5% m/m gain in gasoline station sales. We expect the 0.7% m/m improvement in sales in the key control group to be supported by a normalization in tax refunds, rising real disposable income, and a still humming labor market.

Manufacturing sales are forecast to decline by 0.7% in February as a pullback in motor vehicle production weighs on the headline print. Preliminary motor vehicle output saw a sharp pullback in February, reminiscent of the January decline south of the border. Elsewhere, the lack of February export data creates a challenge, although other indicators are consistent with a soft print. Employment data revealed a pullback in hours worked through February, while the manufacturing PMI revealed the most modest expansion since September 2016. Gasoline prices should provide a tailwind to the nominal print and there is also scope for higher volumes on the heels of an 11% decline from October. Meanwhile, real manufacturing sales should come in slightly below the nominal print, owing to higher industrial prices.

We expect headline CPI to firm to 1.9% y/y, reflecting a second consecutive 0.7% m/m increase. Gasoline prices should lend a substantial boost with retail prices having risen 11% m/m. But one-off factors are also significant this month with a focus on travel services, telephone/internet services, airfares, and rents. On balance, their expected swings point to upside for March CPI. We see potential for a boost from airfares as a result from the grounding of BA planes, which lowered capacity in the market. Internet services are exposed to an upswing from the announced price increases by Rogers and Bell over March and April. Increases in the 5-10% m/m range amount to a 5-10bp contribution to the y/y print. Rents are most uncertain, but significant increases in the past months, if maintained, suggest a 5bp contribution. However, a late Easter argues for a weaker seasonal rise in travel services in March, consistent with past trends.

Looking to core CPI, we expect the average of the BoC’s preferred measures to remain stable at 1.83% y/y but see modest upside risks to CPI-trim and median on favourable base effects. Our March forecast is consistent with Q1 CPI at 1.6% y/y vs the BoC’s estimate of 1.7%.

TD looks for the trade deficit to widen a touch to $4.4bn in February as weaker export activity is partially offset by a more modest pullback in imports. Softer exports should be driven by non-energy products on a pullback in motor vehicle shipments, while energy exports will provide a key offset on a recovery in crude oil prices. On the other side of the ledger, we expect imports to give up a small portion of last month’s gain although aircraft products should help to buffer the declines. Aircraft imports surged by 50% m/m in January after Boeing resumed deliveries to Air Canada and Westjet, and deliveries rose again in February.

TD looks for retail sales to rise by 0.4% in February. Motor vehicle sales should make a positive contribution although harsh weather will limit the size of any rebound from the 1.4% decline last month. Unseasonably cold weather throughout February also weighed heavily on residential construction, which should feed into softer building material sales. Elsewhere, the first increase in gasoline prices since July will provide a tailwind to nominal sales which, alongside stronger auto sales, should leave core measures to underperform the headline print. Real retail sales should also come in below the headline print with a 0.1-0.2% increase owing to higher consumer prices in February.