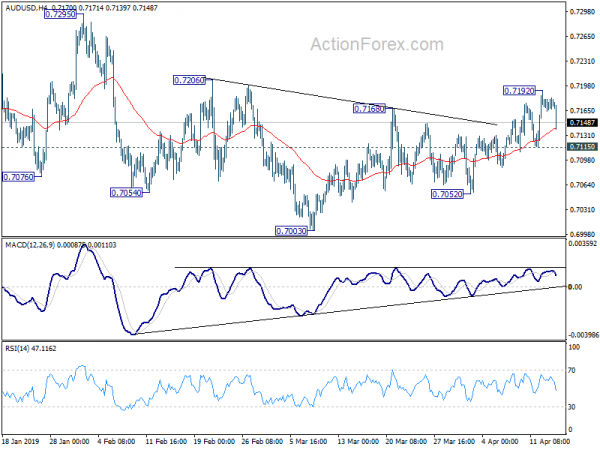 Commodity currencies are generally under some selling pressure today. Australian Dollar is the weakest one as RBA took another step to laid the ground for rate cut by dovish minutes. RBNZ Governor Adrian Orr reiterated the central bank’s easing bias. Canadian Dollar was sold off overnight after poor Business Outlook Survey and remains weak in Asian session. On the other hand, Yen is paring some losses, but upside is limited by mild risk appetite in Asian stock markets. Swiss franc and Dollar follow as next strongest. Focus will turn to employment data from UK and investor sentiment in Germany.

Technically, AUD/USD is holding well above 0.7115 minor support despite today’s pull back. Thus, more upside remains mildly in favor in near term. Despite overnight strong rebound, USD/CAD is held well in range below 1.3467 resistance and more consolidation could be seen before upside breakout. USD/JPY lost momentum ahead of 112.13 but retreat is so far very shallow. Focus remains on this key resistance for today.

Australian Dollar tumbles sharply in Asian session after dovish RBA minutes set out the conditions for a rate cut. It’s seen as another step towards more monetary easing ahead, as markets are expecting two cuts this year.

The most important part of the minutes is that RBA confirmed there could be a need for rate cut. It said “a lower level of interest rates could still be expected to support the economy through a depreciation of the exchange rate and via reducing required interest payments on borrowing, freeing up cash for other expenditure”. Also, in a scenario where ” inflation did not move any higher and unemployment trended up”, “a decrease in the cash rate would likely be appropriate in these circumstances”.”

Nevertheless, “members agreed that there was not a strong case for a near-term adjustment in monetary policy”. It suggested RBA would wait-and-see, likely at least through Q2.

RBNZ Governor Adrian Orr said today that monetary easing bias remains in place for now. And softer economic conditions in US, Europe and China are having a role in the dovish tone.

Also, Orr added that “possibilities of first quarter inflation numbers being undershot have already being factored in the RBNZ’s dovish bias”. The comments came just ahead of New Zealand’s CPI release tomorrow. Headline inflation is expected to slow from 1.9% yoy to 1.7% yoy in Q1.

NZD/USD is a touch lower after the comments. However, Orr said that inflation undershot was already factored in. Thus, there is prospect of a mild rebound should tomorrow’s CPI release meets expectations.

BoC also warned that global trade headwinds and geopolitical tensions are affecting firms’ operations. Several respondents cited negative impacts on their outlooks from US policy changes and related uncertainty. Some firms reported impediments to their export sales resulting from US protectionism. Other respondents reported that US tax cuts and regulatory differences reduce their competitiveness vis-à-vis US firms. Several firms noted cost increases due either directly or indirectly to tariffs, notably those on steel and aluminum as well as those associated with Canadian countermeasures. Some firms noted that the US–China trade dispute weighs indirectly on their business.

Evans: Fed should embrace inflation above 2%, 50% of time

Chicago Fed President Charles Evans said on Monday that Fed’s policy has been “successful” in achieving the maximum employment mandate. It’s “less successful” regarding the inflation objective. And to fix this, he added, “Fed must be willing to embrace inflation modestly above 2 percent 50 percent of the time.” For him, he would “communicate comfort” with core inflation at 2.5%, as long as there is “no obvious upward momentum” while the path back to 2% can be “well managed”.

For now, Evans is still expecting that “some further rate increases may be appropriate over time”. He expects growth to be at around 1.75-2.00% this year. Still he maintained that current patient stance is appropriate given the “heightened uncertainty” including US-China trade war. He also emphasized that “if activity softens more than expected or if inflation and inflation expectations run too low, then policy may have to be left on hold – or perhaps even loosened – to provide the appropriate accommodation to obtain our objectives.”

Ahead of a broad review on monetary policy framework, Boston Fed President Eric Rosengren said he’d prefer a range targeting approach on inflation. That is, Fed could be forced to accept inflation below 2% during recessions. On the other hand, Fed should commit to achieve above 2% inflation in good times. For example a range of 1.5-2.5%.

Rosengren echoed other platemakers’ comment that the current 2% target is “symmetric”. But in practice, people saw that figure as a “ceiling”. He added, “even though we’re only missing by a little bit it actually does matter if you miss by a little bit on a regular basis.”

UK employment and German ZEW economic sentiment are the major focuses for today. Later in US session, Canada manufacturing sales and international securities transactions will be release. US will also feature industrial production and NAHB housing index.

Today’s sharp retreat suggests temporary topping at 0.7192 in AUD/USD. Intraday bias is turned neutral first. Further rise remains in favor with 0.7115 minor support intact. On the upside, above 0.7192 will target 0.7206 resistance first. Break will likely resume larger rebound from 0.6722 through 0.7295 resistance. On the downside, though, break of 0.7115 minor support will turn intraday bias back to the downside for 0.7003/7052 support zone instead.