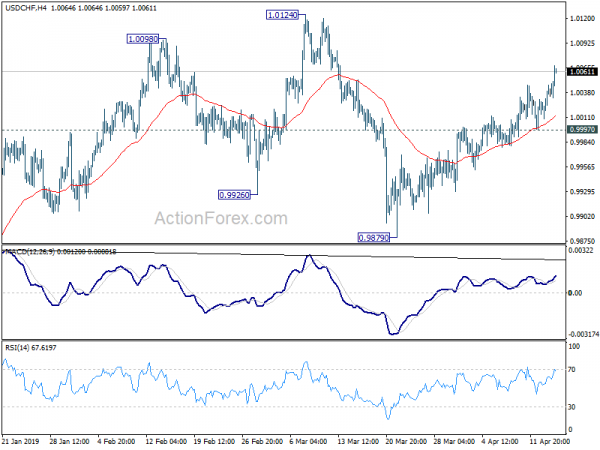 Funds are flowing out notably from safe haven assets today. Gold dives through 1280 handle and is resuming fall from 1346.71 high. German 10-year yield is up for another day at 0.067. US 10-year yield is also trading stronger at 2.575, possibly targeting 2.6 handle. In the currency markets, Swiss Franc is suffering broad based selloff and is the weakest one. Apparently, funds are flowing back into Dollar, even though Yen and Euro are not weak at all.

Technically, USD/CHF is picking up upside momentum for 1.0124/8 resistance zone. EUR/CHF is also on track for 1.1384 and then 1.1444 resistance. USD/JPY retreated mildly earlier today but there was no follow through selling. Focus remains on 112.13 key resistance. Both EUR/USD and AUD/USD dipped earlier today but stayed above near term support level at 1.1250 and 0.7115 respectively. Further rise remains mildly in favor in both pairs.

ZEW President Professor Achim Wambach: “The slight improvement recorded by the ZEW Indicator of Economic Sentiment is largely based on the hope that the global economic environment will develop less poorly than previously assumed. The postponement of the Brexit deadline may also have contributed to buoy the economic outlook. By contrast, the latest figures regarding incoming orders and industrial production in the German industry point to a rather weak economic development.”

EU Tusk: Everyone is exhausted with Brexit

European Council President Donald Tusk “on both sides of the Channel, everyone, including myself, is exhausted with Brexit, which is completely understandable.” However, he emphasized it’s not an excuse to say “let’s get it over with, just because we’re tired.”

He explicitly responded to a leader of a EU state who had warned “dreamers” not to think “Brexit could be reversed”. Tusk said: “At this rather difficult moment in our history, we need dreamers and dreams. We cannot give in to fatalism. At least I will not stop dreaming about a better and united Europe.”

European Commission Jean-Claude Juncker said it was not his working assumption that Brexit could be reversed or extended beyond a new Oct. 31 deadline.

Australian Dollar tumbles sharply in Asian session after dovish RBA minutes set out the conditions for a rate cut. It’s seen as another step towards more monetary easing ahead, as markets are expecting two cuts this year.

The most important part of the minutes is that RBA confirmed there could be a need for rate cut. It said “a lower level of interest rates could still be expected to support the economy through a depreciation of the exchange rate and via reducing required interest payments on borrowing, freeing up cash for other expenditure”. Also, in a scenario where ” inflation did not move any higher and unemployment trended up”, “a decrease in the cash rate would likely be appropriate in these circumstances”.”

Nevertheless, “members agreed that there was not a strong case for a near-term adjustment in monetary policy”. It suggested RBA would wait-and-see, likely at least through Q2.

RBNZ Governor Adrian Orr said today that monetary easing bias remains in place for now. And softer economic conditions in US, Europe and China are having a role in the dovish tone.

Also, Orr added that “possibilities of first quarter inflation numbers being undershot have already being factored in the RBNZ’s dovish bias”. The comments came just ahead of New Zealand’s CPI release tomorrow. Headline inflation is expected to slow from 1.9% yoy to 1.7% yoy in Q1.

NZD/USD is a touch lower after the comments. However, Orr said that inflation undershot was already factored in. Thus, there is prospect of a mild rebound should tomorrow’s CPI release meets expectations.

OECD: China at a crossroad, should lower external and internal barriers

In an OECD survey report, Deputy Secretary-General Ludger Schuknecht, warned that “China is at a crossroads, facing serious domestic and external challenges to maintaining its strong position over the long-term.”. He urged that “policy should seek to ensure a better functioning economy that delivers stable and inclusive growth for all.”

Additionally, there are :wide scope to improve efficiency across the economy, notably by reducing the internal barriers that hinder product market competition and labour mobility.”. And measures include “stronger protection of intellectual property rights; gradual removal of implicit guarantees to state-owned enterprises, allowing them to default; and reduction of state ownership in commercially-oriented, non-strategic sectors.”

USD/CHF’s choppy recovery from 0.9879 resumed after brief consolidation and reaches as high as 1.0068. Intraday bias is back on the upside for 1.0124/8 resistance. . However, as the structure of the rise is corrective looking, we’d expect strong resistance from 1.0124 to limit upside to bring another decline. On the downside, below 0.9997 minor support will turn bias to the downside for 0.9879 support.

In the bigger picture, loss of upside momentum is seen is bearish divergence in daily MACD. But there is no clear sign of bearish reversal in USD/CHF yet. Rise fro 0.9186 is likely still in progress. Decisive break of 1.0128 resistance will resume this medium term rally to 1.0342 resistance next. This will remain the preferred case now, as long as 0.9716 support holds.