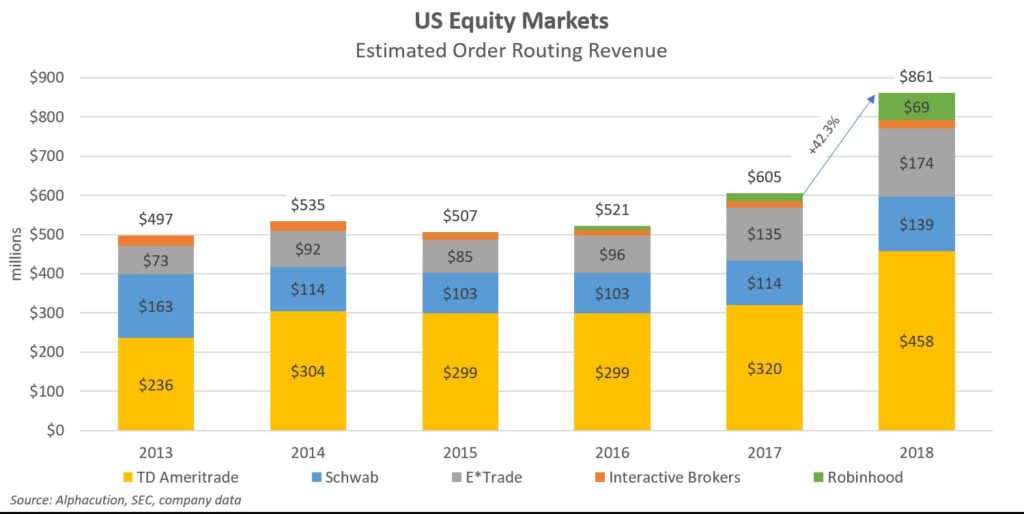 The revenue Robinhood gets from a controversial practice of selling customer trades to high frequency trading firms is skyrocketing, according to new research.

The popular millennial stock-trading app brought in $69 million in order routing revenue in 2018, according to a new estimate from Alphacution Research, three times what the company brought in a year earlier. So-called “payment for order flow,” is a common practice on Wall Street.

The Menlo Park, California-based company has ushered in 6 million users and a $5.6 billion valuation in its five-year existence. Its no-fee model for stock trading has been successful in attracting millennials and put pressure on incumbents like Charles Schwab and TD Ameritrade, which charge $4.95 and $6.95, for trades, respectively.

Robinhood has faced criticism over its reliance on high-frequency traders, especially considering a founding ethos that some have categorized as “anti-Wall Street.” The company sends customers’ orders to high-frequency trading firms like Virtu or Citadel Securities instead of a stock exchange like the NYSE. These trades are executed in what’s known as a dark pool, which as the name suggests, lacks some transparency.

Critics of high-frequency trading say the practice, which takes milliseconds, can result in big market swings and also allow institutional investors to gain an upper hand over smaller retail investors.

“The question is, what does that suggest about the underlying execution quality? Are they are going to be biased based on who is paying the most?” Rowady said. “There’s a feeling that maybe because of mass tech and speed in everything, that there’s still some games being played.”

But the practice is hardly unique on Wall Street. Roughly 40 percent of all trading is done outside of exchanges — up from just 10 percent a decade ago, according to CFA Institute, a group of investment professionals. There are also regulations that require broker dealers to execute trades at the best price.

The entire industry saw a roughly 42 percent increase in overall order-routing revenue, according to Alphacution. TD Ameritrade for example, saw 43 percent growth in order-routing revenue year over year. Robinhood’s outsized percentage increase accounts for the fact that it was much smaller to start, Rowady said.

Robinhood makes money by taking a fraction of a cent per dollar from each trade order and collecting interest on customers’ deposits. It also has a paid subscription service called “Robinhood Gold,” unveiled in September 2016.

As a private company, Robinhood is not required to disclose its income statements, which would paint a better picture of its revenue components. As a registered broker-dealer, though, it does have certain required disclosures, which Alphacution used to estimate its totals.

According to a Bloomberg report last year, Robinhood brought in more than 40 percent of its revenue in early 2018 from selling its customers’ orders to high-frequency trading firms, or market makers. Shortly after the report, Robinhood’s co-founder and CEO Vlad Tenev defended the practice in a blog post.

Tenev said like its broker-dealer peers, the start-up “participates in rebate programs which help customers get additional price improvement for their orders by creating competition amongst the exchanges and liquidity providers who fill the orders, often resulting in superior execution quality.”

“We send your orders to the market maker that’s most likely to give you the best execution quality,” Tenev said a blog post.

Robinhood did not immediately respond to CNBC’s request for comment.

The growth in Robinhood’s revenue came alongside a massive increase in customers. The start-up jumped from 5 million to 6 million customers in a matter of months last year.

It also ended 2018 with a major misstep, though. The company announced in December that it would launch checking and savings accounts with an eye-popping, industry leading interest rate. Just a day later, Robinhood’s co-founders said they were re-naming and re-launching after regulators and Wall Street sounded the alarm.

“Robinhood is growing and their business plan seems to be working,” Rowady said. “It’s just a question of when you look below the components of revenue — is it sustainable, and how far can it go?”