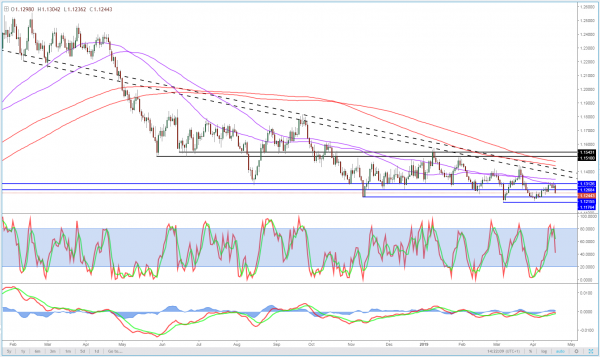 European equity markets have recovered from earlier weakness, following another disappointing batch of PMIs from the euro area, with stocks being supported by a weaker euro.

It’s going from bad to worse for the eurozone, with the latest PMIs for the region once again highlighting just how worrying the outlook has become. The block started to slow last year but the decline appears to have accelerated in recent months, with the manufacturing survey now giving contractionary readings for Germany, France and the euro area as a whole, with the former being well into the territory despite rebounding slightly to 44.5.


It’s been a staggering drop off that has forced Italy into recession, pushed Germany to the brink and weighed heavily on the currency just as the central bank was planning to bring a decade of stimulus to an end with a first rate hike this year since 2011.

That plan has collapsed before it really got going and instead we have new TLTROs and it won’t be long until people are asking questions about whether more QE will be necessary, only a matter of months after new purchases were brought to an end.
Euro dips on weaker figures

Naturally the euro is not responding well to the news, as it dipped below 1.13 against the dollar to trade in the mid-1.12 range. While we’re still a little bit from the recent lows, the path of least resistance certainly looks below as it becomes clear just how fragile the region still is.

This is keeping the dollar well supported as other currencies win the race to the bottom, even as the Fed dramatically lowers its interest rate expectations and an economic slowdown and possible earnings recession looms. The grass is simply less green everywhere else.