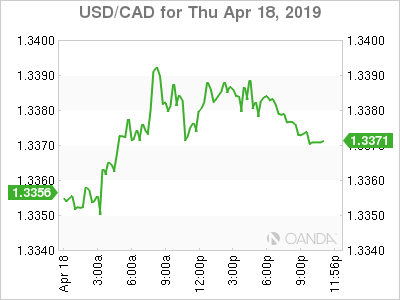 The Canadian dollar fell 0.28 percent on Thursday. US economic data was the deciding factor as the dollar rose against the loonie despite crude prices heading higher. Canadian retail sales had strong gains but could not overcome their US counterpart. American retail sales exceeded expectations and boosted the dollar against the board.

Oil prices softened the fall of the CAD as crude is still supported by supply disruptions as US sanctions on Iranian and Venezuelan exports remain and the military actions in Libya continue. OPEC+ efforts are the main factor in adding stability to prices, despite rising US production. The pivotal moment for crude prices will come when the group meets at the end of the current agreement term to discuss what are the next steps.


Canada has extended the Trans Mountain oil pipeline decision to June 18. The pipeline has been beset by regulatory and ecological group pressures, but it promises to almost triple output from the oil sands into British Columbia.

The US dollar is higher against most major pairs after retail sales in the United States exceeded expectations with a 1.6 percent gain. Solid data ahead of the Easter holiday gave the greenback the edge against other currencies. European data, in particular manufacturing PMIs keep dropping putting more pressure on the euro. The European Central Bank (ECB) has been dovish as growth in the Union is running out of traction.

The USMCA was in the news again as the US International Trade Commission reported that the deal between the US, Mexico and Canada would boost growth in the US. The quasijudicial Federal agency is giving thumbs up for the trade agreement as it needs to be ratified by all three members.

Crude prices rose on Thursday. Brent gained 0.4 percent and WTI 0.27 percent despite a rebound in the US dollar. Better than expected retail sales in the US boosted the currency ahead of the Easter long weekend. Energy prices ended higher as Saudi Arabia continues to report drops in crude exports. The OPEC+ agreement to cut production has been led by example by the Kingdom now cutting 227,000 daily barrels in February.

Supply concerns persists with US sanctions against Iran and Venezuela and the civil war in Libya, but the OPEC+ agreement has been the bigger factor. The deal to limit production has stabilized prices working against rising US production.

Energy demand was given a positive signal as China grew 6.4 percent in the first quarter of 2019.

The biggest obstacle for higher prices is the same factors that got them here in the first place. US sanctions against Iran and Venezuela could get tighter, but it could trigger an end to the OPEC+ deal. Russia and other major producers have hinted that they could ramp up production.

US shale expectations point to more supply, so a repeat of 2014 when prices fell off a cliff could present itself if Saudi Arabia does not manage to convince major producers to keep the production cuts active.

Gold was flat on Thursday but is headed for a 1.4 percent weekly drop as investors sold safe havens looking for higher returns. Risk events have been pushed out to the medium term and with uncertainty easing gold is on the back foot.

The rise of the dollar after positive economic news put more downward pressure on the metal, but while anxiety around geopolitical events has eased into the background, there was no closure with Brexit, US-China trade war and other events sure to pop back up again which is why gold could once again be used as a safe haven.

Physical demand of gold has been on the rise with some central banks buying large quantities to diversify their reserves away from the US dollar. Retail investors have also taken opportunistic positions with current prices on the decline and the timing has worked out for Indian jewellers ahead of the Akshaya Tritiya festival.

Global stocks were mostly in positive territory despite sell offs in specific sectors. The retail sales data point boosted the market as its injected confidence in the US. Earlier European data had cast doubts on economic growth going forward and put downward pressure on the euro.

Geopolitical risk was less present this week with the Muller report failing to get a strong reaction from investors. Growth concerns remain as mixed data has been the norm but now with less pressure from risk events there will be more focus on fundamental data.