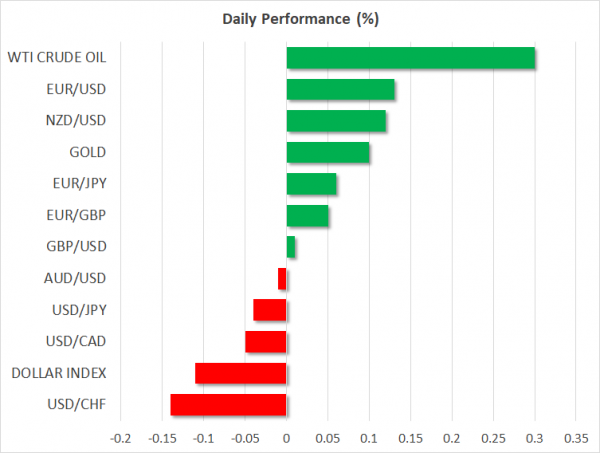 Dollar bulls made a comeback on Thursday after retail sales in the US unexpectedly surged in March and weekly jobless claims fell to their lowest in nearly half a century. The data once again highlighted the resilience of the US economy, with many investors further cutting their bearish bets on the interest rate outlook.


The dollar index, which measures the US currency against a basket of six of its major peers, climbed to a more than two-week high of 97.49, in a sign much of the concerns about a possible US downturn have now subsided. Sentiment for US assets was also boosted from positive earnings results on Wall Street, helping the S&P 500 make modest gains.

But the greenback was unable to make much progress versus the yen as growth worries in other parts of the world kept the safe-haven in demand. The pair continued to hover around 111.90 on Friday.

No end in sight to Eurozone gloom

In stark contrast to the upbeat US data and an improving picture in China as well, Eurozone indicators disappointed on Thursday, reviving fears of a prolonged slowdown or even a recession in the euro bloc. The flash PMI readings by IHS Markit for April showed the Eurozone’s manufacturing sector continues to shrink, while services activity softened by more than expected.

The euro tumbled on the data and was later further pressured by the bullish dollar, pushing the pair to a 10-day low of $1.1224. With most European markets closed today and on Monday for the Easter celebrations and few releases on the schedule next week, the euro will likely struggle to find much upside over the coming days.

The pound also underperformed on Thursday despite very strong retail sales numbers out of the UK and overall recent UK data being relatively solid. Sterling was unable to overcome the dollar’s advances amid the ongoing Brexit uncertainty and cable slipped below the key $1.30 level.

Traders will be on standby next week for a possible vote in the British Parliament on whether the UK should remain in the EU customs union after Brexit.

The Australian and New Zealand dollars were the other big losers from the greenback’s rally. The aussie’s short-lived claim of the $0.72 handle following China’s positive GDP print became difficult to repeat as the currency seemed more comfortable closer to the $0.7150 level. The focus for aussie traders now turns to next week’s quarterly inflation figures out of Australia, which could determine whether the RBA will cut rates in the near future.

The Canadian dollar was perhaps the exception as its losses were more contained. The loonie was supported by better-than-expected retail sales figures of its own, which followed CPI numbers earlier in the week that pointed to an uptick in underlying measures of inflation in Canada. Nevertheless, the loonie remained rangebound and was last drifting around C$1.3370 as traders awaited next week’s Bank of Canada policy meeting for more direction.

In commodities, higher US Treasury yields drove gold prices to a near 4-month low of $1270.63.