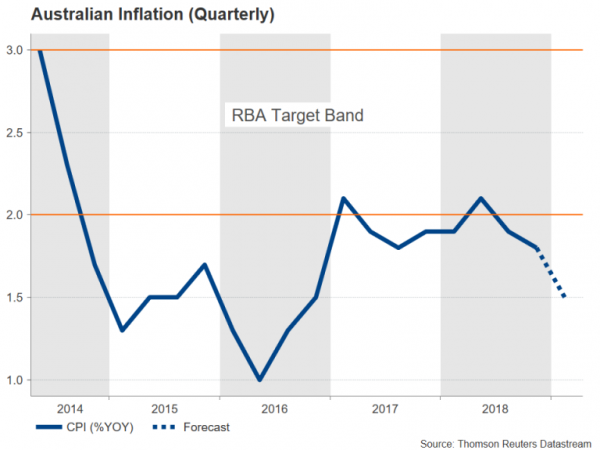 After China’s upbeat growth numbers this week, all eyes will be on the US economy’s performance during the first quarter. Aside from the US GDP, it’s going to be a rather quiet seven days for economic data due to the shortened Easter week but there will be two major central bank meetings to keep traders at their desks. The Bank of Canada and the Bank of Japan will announce their latest policy decisions in the coming days.

The Australian dollar has been steadily edging upwards from 2-month lows plumbed in March as risk sentiment improved. However, the gains have been very modest as expectations that the Reserve Bank of Australia’s next move will be a rate cut have been intensifying. The minutes of the RBA’s April policy meeting said a rate cut would be warranted if inflation remains low and unemployment begins to rise.


But with growth in China – Australia’s largest trading partner – seemingly rebounding and employment continuing to rise, markets may be overpricing the likelihood that the RBA will meet the conditions it’s set out to lower borrowing costs. Those odds may get a boost, though, next week if quarterly inflation numbers disappoint.

Inflation is expected to have risen by 1.5% on an annual basis during the first three months of the year, holding below the RBA’s 2-3% target band for the third straight quarter. The CPI report is out on Wednesday and will be followed by producer prices on Friday. The aussie is susceptible to sharp moves in either direction from any surprises in the inflation figures.

Bank of Japan to stand pat but projections eyed

The Bank of Japan is not expected to make any changes to its policy when it announces its decision on Thursday. However, the event could still prove market moving as the Bank will publish its latest quarterly outlook report where any downgrade in its forecasts could stoke expectations of fresh policy easing in the coming months.

After some progress in 2017, inflation in Japan has been stuck between 0.7%-1.0% for the past year, while economic growth has weakened notably as exports (Japan’s main driver of growth) have struggled on the back of the global slowdown. BoJ’s governor, Haruhiko Kuroda, recently told Japanese lawmakers that the Bank would consider additional easing if momentum towards its 2% inflation target is lost.

However, given the BoJ’s limited arsenal, there would likely need to be a more severe downturn to spur the BoJ into action. Nevertheless, any dovish tilt by the Bank next week could weigh on the yen, which has already been under pressure lately from the bounce in risk appetite.

In addition to the BoJ meeting, economic indicators due on Friday will also be watched in Japan, including industrial production, unemployment and retail sales numbers for March.

No change either from Bank of Canada

The Bank of Canada will be the other central bank holding a policy meeting next week, and like the BoJ, it’s not expected to make any changes to its policy on Wednesday. Investors may have already gotten a glimpse of the BoC’s latest views on the economy from the Bank’s Spring Business Outlook Survey released this week, which pointed to declining business sentiment.

The Bank has raised rates five times since the summer of 2017 but has been on hold since October 2018 when it last hiked its overnight rate. However, despite becoming more cautious, the BoC has maintained a tightening bias and Governor Stephen Poloz recently suggested he thinks the slow patch in the Canadian economy will be temporary.

Should Poloz maintain a similar tone at his press conference next week, the Canadian dollar could be in line for a small lift as markets are anticipating a somewhat more dovish stance. The loonie has been caught in a range versus the US dollar as a worsening outlook has offset higher prices in oil – Canada’s biggest export.

Q1 GDP to be sole highlight of US calendar

Not even the US, where markets will be open on Easter Monday unlike most Westerns countries, will be able to escape the shortage of data releases. The main numbers to watch will be existing home sales on Monday, new home sales on Tuesday and durable goods orders on Thursday, all for March.

Everyone’s focus, though, will be on the advance GDP report for the first quarter on Friday. The US economy is expected to have expanded by an annualized rate of 1.8% between January-March, slowing slightly from the prior 2.2% pace. With many recent indicators surprising to the upside, a beat in the Q1 GDP reading would be another confirmation that US economic momentum remains solid.

It would also boost broader market sentiment, which was already bolstered this week from stronger-than-forecast data out of China. However, with the dollar index still trading not too far from its 2018 highs, it may be difficult for the bulls to push the greenback significantly higher and the GDP report will likely struggle to break the dollar crosses outside of their current sideways ranges.

Few cues for euro and pound next week

The euro and pound are set for a subdued week with not a lot of drivers for the European market. After this week’s disappointing flash Eurozone PMIs for April, the German Ifo business sentiment gauge should attract some attention on Wednesday. Ahead of that, the flash consumer confidence print for the euro area for April will be released on Tuesday.

Although there’s been some evidence that the slowdown in the Eurozone is bottoming out, the latest PMIs suggest a sustained recovery could be some time away, keeping a check on the euro’s recent rebound.

Surprisingly, UK data has been much more robust in comparison but the standstill in the Brexit process is keeping investors away from UK assets. There are no major releases in Britain next week, but Parliament will return from its Easter break on Tuesday and it’s possible MPs may try to push through a vote on whether the UK should remain in a customs union once it leaves the EU.

Any plan to maintain a customs union post-Brexit would be positive for the pound as it would not only resolve the Irish backstop issue but would also simplify talks on a future trading relationship between the UK and the EU.