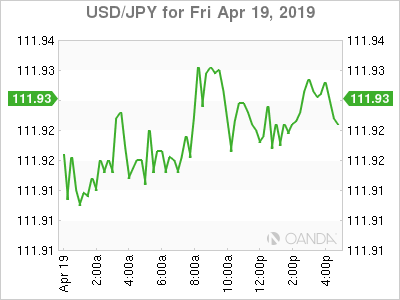 The US dollar ended the week higher after mixed data and earnings reports provided a slightly optimistic tone for the US economy.  With thin conditions persisting due to the observance of Easter, choppy price moves could be expected over the next couple of sessions.  All eyes will be on a barrage of US data with the focus on Friday’s advance reading of first quarter GDP.  Earnings season also enters high gear with results from Boeing, Caterpillar, Microsoft, Tesla, Amazon and Exxon.   The Bank of Canada is also expected to keep rates unchanged at the Wednesday meeting.  The Bank of Japan is also expected to keep policy unchanged while providing small cuts to their economic forecasts.

The Japanese yen could see volatile moves from both the BOJ’s rate decision on Thursday, but more importantly, ahead of Japan’s 10-day holiday break, aka shutdown that begins next week for the Golden Week holiday.  The BOJ is pleased global yields have stabilized and their policy meeting is unlikely to see any majors with their yield curve control.  The BOJ could downgrade their outlook report, like what the rest of the world has been doing.

The Bank of Canada is widely expected to keep rates unchanged at the Wednesday policy meeting.  Most forecasters see no change for the rest of 2019 and are unsure which direction they may go in 2020.  The outlook for Canada has deteriorated over the past month, as the mandatory production cut is hurting their exports, housing market is worrisome, and sentiment remains weak due to uncertainty with global trade relations.  Concerns for economy are growing as the probability for a recession in the next 12 months has increased to 20%, with the next 24 months having a 27.5% chance.

US first quarter GDP is expected to remain steady at 2.2%, despite dealing with the longest-ever partial federal government shutdown and flurry of softer data for the first couple months of the year.   Thursday’s retail sales reading for the month of March showed the best reading in 18 months.  The narrowing of the trade deficit also bodes well that growth may not weaken from the prior period.

Both economists for JP Morgan and Goldman Sachs have raised their forecasts to 2.5% and 2.1% respectively.

The big financials kicked off earnings season and so far the results were mixed.  A clearer take on the first quarter is expected after we see results from 150 of the 500 companies in the S&P 500.  Investors will closely follow the results and earnings calls from Amazon, Microsoft, Visa, Facebook, Boeing, Caterpillar, Halliburton, Hasbro, Lockheed, Tesla, Coca-Cola, Twitter, eBay, United Tech, Harley-Davidson, AT&T,  Chipotle, Ford, Intel, Mattel, Southwest, Starbucks, Exxon and Chevron.

On Friday, President Donald Trump and Japanese Prime Minister Shinzo Abe meet at the White House to discuss trade and North Korea.  Trump has also planned a visit to Japan at the end of May to meet the new emperor.  So far, Trump has not imposed tariffs on Japanese cars as both countries have begun trade talks.