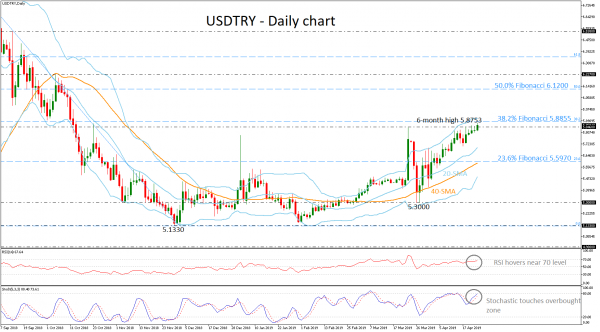 Looking at the technical indicators, the stochastic is switching to the upside, challenging the overbought territory, while the RSI is approaching the 70 level, confirming the recent bullish tendency in price action in the near-term.

If the market corrects higher, the bullish action may pause initially near the 38.2% Fibonacci of 5.8855 and the upper Bollinger band. A rally on top of the latter would probably stage fresh buying pressure, with the price moving next to the 50.0% Fibonacci of 6.1200.


On the other hand, dropping below the mid-level of the Bollinger band could see losses extending towards the 23.6% Fibonacci of 5.5970. Even lower, the bears could stall around the lower Bollinger band currently at 5.4852.

The recent bullish action turned the weak momentum to a more aggressive one, with the shorter-term simple moving averages (SMAs) increasing distance above the longer-term SMAs, so we could expect further improvement in the market.