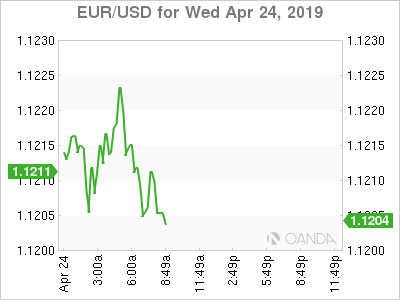 The dollar continues to march on higher, while global yields fell as markets await the next wrath of earnings.  The S&P 500 and Nasdaq both closed above their prior record high closes yesterday and investors are continuing to run to stocks as the Fed appears on hold for the foreseeable future, possibly deep into 2020.

The dollar is higher against the euro after Germany’s IFO survey disappointed once again.  Germany can’t seem to show any firm signs of rebounding and the euro remains vulnerable here.  The survey showed misses across the board on expectations, current assessment and business climate.  Expectations were small that Germany was rebounding after improvements in the latest PMI readings, but today’s reading only provides optimism their situation is only stabilizing.

The RBA’s job just got a lot easier following terrible inflation data from down under.  The central bank will likely need to deliver a rate cut at the next meeting and more might follow after that.  Annual inflation fell to 1.3%, the third consecutive print below the RBA’s target range and the lowest since Q3 of 2016.  Markets are expecting two rate cuts in 2019 and the AUD/USD remains vulnerable despite mounting trade deal optimism coming from the US and China.

Two giant earnings reports came from Boeing and Caterpillar.  Boeing shares initially sold off following the miss on EPS and announcement of the suspension of its annual forecast.   Trade remains volatile as buyers quickly emerged and shares now appear poised for a positive open.  The removal of guidance was expected by many until they have further clarity on 737 Max returning to service.  Boeing beat on cash flow, but all the market cares about is the future production of the 737 Max.

Caterpillar’s stock price jumped following a beat on the both the top and bottom line.  The mining and construction equipment maker giant also saw an overreaction to a raise in guidance that was mainly attributed to a tax credit.  Shares have given up most of their gains.  The results from Caterpillar are a good sign for the economy, mainly signalling that the trade war has not derailed growth.

The Dow and S&P 500 are still stuck near yesterday’s closing levels as investors appear unconvinced to take this rally to fresh record highs.

West Texas Intermediate crude is down from the 6-month highs ahead of the API report that is expected to show a build of 6.86 million barrels.  The rally that stemmed from waiving of US sanctions for eight countries to buy Iranian crude appears over.  Supply side focus is here and if the market is well supplied any steep builds with inventories could help trigger a decent pullback here.  Markets will await the Saudis plan on how they will cover the shortfall from Iran.  The OPEC + production cut agreement appears to be toast and markets may be waiting to see signs from Russia abandoning cuts before hitting the sell button.

Gold prices appear to be stabilizing, up 0.1% on the session, but more importantly $7 above yesterday’s low.  The precious metal benefited from the disappointing economic data from Europe and will likely take a queue from US stocks.  Safe-haven demand has not really been given any help thus far from earnings seasons.  Gold remains vulnerable on trade optimism, but that could see a small hiccup as China is not happy with the US sanction decision on Iranian crude.