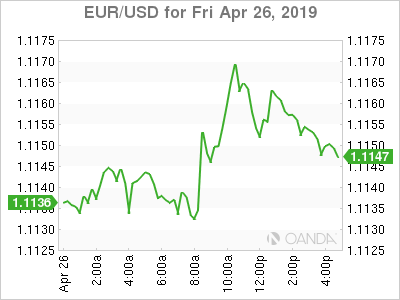 The US dollar rallied for most of the trading week, but gave back gains on Friday after the US first quarter GDP strong beat was supported by transitory factors and softer core PCE.  The headline showed US economic growth accelerated much faster than the high end of economists’ forecasts.  Net trade inventories and inventories were responsible for half the gains of GDP and personal consumption dropped sharply.  The kneejerk rally in the dollar was short-lived as rate cut expectations grew slightly.

What is next for the US dollar?  After approaching two-year highs, with the last leg mainly being attributed to weakness in Europe, the dollar will look to take queues from the Wednesday’s Fed meeting and Friday’s nonfarm payroll report.  No change in policy is expected from the Fed, but investors will look for clues if they will say what is needed to occur for them to make a policy move.   The Fed is expected to make this meeting a non-event, but it could become one if they become optimistic on the economy.  On Friday, the April nonfarm payroll report is expected to see hiring create 185,000 new jobs, down from 196,000 in March.  The labor market remains the strong part of the economy, but we are starting to see some signs of weakness with job openings and jobless claims.

Two big risks for Asia will come from the next round of trade talks and another round of Chinese PMI readings.  This will also occur during Japan’s observance of Golden Week, which could mean exaggerated moves with yen crosses.

Treasury Secretary Mnuchin and US Trade Representative Lighthizer return to Beijing for another round of talks that will focus on intellectual property, forced technology transfer, non-tariff barriers, agriculture, services, purchases and enforcement.  President Xi delivered many assurances with his speech at the Belt and Road Forum in Beijing.  If President Trump signals to his team he is content with the latest concessions, we could see a final meeting setup later in May.

China’s Government PMI readings are also expected to remain in expansion territory, with the manufacturing reading rising from 50.5 to 50.6.

So much for negative earnings forecasts.  Roughly a third of the way through earnings season and markets are happily surprised with the results.  Financials were mixed but optimistic on the consumer, tech has surprised to the upside and the consumer stocks have been mostly positive.  The next batch of results focus heavily on tech, pharmaceuticals, energy and transportation results.

Crude prices continued to slide from the six-month high made earlier in the week after President Trump tweeted “Spoke to Saudi Arabia and others about increasing oil flow. All are in agreement.”  The biggest fall with oil prices in four months is occurring despite the US ending sanction waivers for Iranian crude and a Russian supply outage.

The problem for oil bulls is that the market has been overly bid and there were hardly sellers in place.  The path of least resistance may be to the downside in the short-term.

The precious metal finished higher for a third consecutive day after markets dissected the US first quarter GDP beat that was accompanied with softer inflation and with components that suggest weakening consumer demand.

The broad-based dollar weakness also provided some much-needed support for gold prices.  Dovish expectations grew for the Fed following the data dump, but if we continue to see record highs in stocks, it will be most difficult for gold to break out much higher.