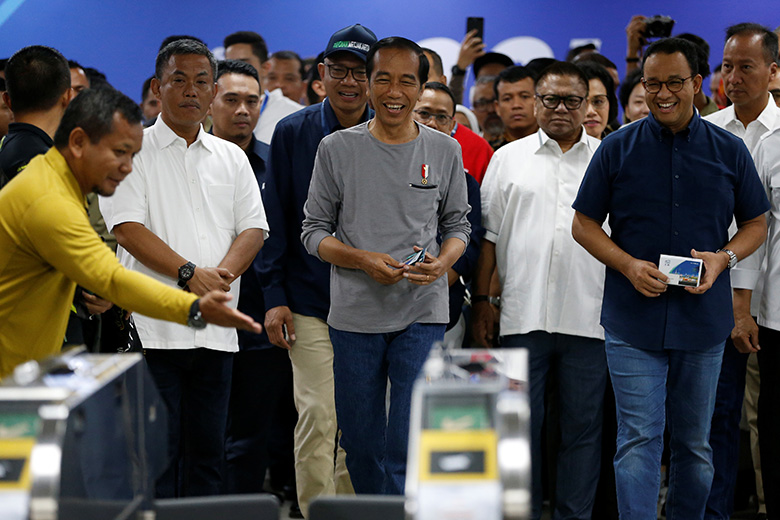 Going places: Jokowi eases through the barriers of the new Jakarta Mass Rapid Transit to continue his journey as Indonesian president

Presidential and parliamentary elections held together for the first time in Indonesia earlier in April could be described as a tame risk event, certainly more peaceful than normal, with few demonstrations or political chicanery.

The outcome was also in line with the opinion polls, providing victory for the incumbent and more moderate contestant Joko Widodo.

Jokowi, as he is colloquially known, represents the Indonesian Democratic Party of Struggle, which is led by former president Megawati Sukarnoputri – the daughter of first president Sukarno.

The defeated challenger and more hard-line Muslim protagonist Prabowo Subianto, a former general competing on the Great Indonesia Movement Party ticket, may be planning to contest the results not officially due until May, but there is no expectation it will lead anywhere other than endorsing Jokowi for a second five-year term.

Its country risk score wobbled slightly in the first quarter, ahead of the vote, highlighting what is invariably a classic pre-emptive response to the risk of potential change.

Political risk is, after all, heightened, to a lesser or greater extent, as elections near.

Yet on a total risk score of 52.8 points out of a possible 100, Indonesia remains a safer bet than many other similarly rated investment grades, from Hungary and Romania, to Turkey and the Philippines:

Largely this is down to Jokowi fulfilling expectations.

Of course, there have been mistakes along the way, with economic growth under-performing relative to potential, and security challenges, but under Jokowi’s watch the country has made strident progress on improving welfare and investing in infrastructure.

Personally, he has kept in touch with ordinary people and reacted when necessary to carry his party along, and appease conservative Muslims, thus proving to be a deft political player.

And while the rupiah occasionally comes in for bouts of turbulence during times of emerging-market vulnerability, the central bank has taken decisive action to calm the situation by raising interest rates.

Its risk score has increased by 3.7 points over five years, and by 6.6 points since the global financial crisis erupted in 2007, climbing 11 places in the global rankings during that time, matching India’s rise, two places higher, step for step.

In August, ECR noted the fact Indonesia was not heading the way of Argentina or Turkey. In February, Indonesia’s resilience was further highlighted.

Scores for numerous risk factors have improved, including – just during the past year – bank stability, corruption, policymaking and hard infrastructure as authorities invest in seaports, refineries, the roads and railways, utilizing private financing.

“General expectation is that Jokowi will succeed in finding the necessary support and forming a government that will remain business friendly, and aiming at further improvements of the investment climate and the infrastructure to support economic growth,” says ABN Amro economist Arjen van Dijkhuizen, a contributor to Euromoney’s risk survey.

“Jokowi had already rolled out a $350 billion infrastructure scheme in his first term, while he also intends to invest more in education.”

Investors will be looking for stronger growth in line with development goals – the 5% norm is not high enough for Indonesia’s potential, but population dynamics, another improving risk factor, seem favourable.

“Currently, Indonesia has 264 million people, which will rise to 366 million people by 2050,” write economists at Natixis Bank. The population pyramid will still be very favourable for potential growth rates as the working population remains robust and the dependency ratio remains low.”

The burden of sovereign borrowing is rising, of course, but appears manageable in relation to GDP, remaining comfortably below the 60% debt limit, climbing to 30% in 2018.

As for the short-term outlook, it is vulnerable to external factors, but ABN Amro expects this to turn more favourable as the cooling of global industry and trade fades.

There are clear risks, but other economists also believe the global-recession talk is overblown as trade negotiators attempt to resolve their differences and China’s state planners prevent a harsher slowdown.

In any event, as Dijkhuizen also points out, with Indonesia’s current account under control – going below 3% of GDP – slowing inflation will allow some room for monetary policy loosening, helping to boost the economy.

All in all, it would seem Indonesia still represents an enticing option with only moderate risk.

A resilient rupiah signals financial markets would tend to agree.