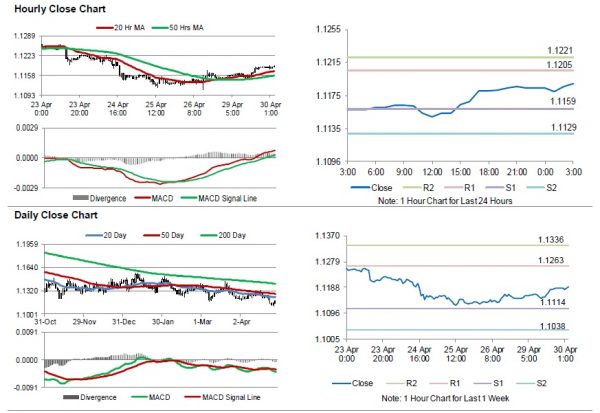 On the other hand, the region’s final consumer confidence index declined to a level of -7.9 in April, meeting market expectations and confirming the preliminary figures. Moreover, the industrial confidence index fell to a 5-year low level of -4.1 in April, declining for the 10th consecutive month and compared to a revised level of -1.6 in the previous month. Market participants had envisaged the index to drop to a level of -2.0. Further, the Euro-zone’s economic sentiment indicator slid to a level of 104.0 in April, undershooting market consensus for a fall to a level of 105.0. The indicator had registered a revised level of 105.6 in the prior month. Meanwhile, the services sentiment indicator remained flat at 11.5 in April, at par market expectations.


In the US, data showed that the Dallas Fed manufacturing business index unexpectedly eased to a level of 2.0 in April, compared to market anticipation of a gain to a level of 10.0. The index had registered a level of 8.3 in the previous month.

On the contrary, the US personal income rose 0.1% on a monthly basis in March, falling short of market consensus for a rise of 0.4%. Personal income had registered an increase of 0.2% in the previous month. Also, the nation’s personal spending advanced 0.9% on a monthly basis in March, rising by the most since 2009 and higher than market expectations for an advance of 0.7%. Personal spending had registered a gain of 0.1% in the previous month.

In the Asian session, at GMT0300, the pair is trading at 1.1189, with the EUR trading a tad higher against the USD from yesterday’s close.

Moving ahead, traders would keep an eye on the Euro-zone’s unemployment rate for March and gross domestic product for the first quarter, along with Germany’s consumer price index for April, scheduled to release in a few hours. Later in the day, the US Chicago purchasing managers’ index and the consumer confidence index, both for April, followed by pending home sales for March, will pique significant amount of investors’ attention.

The currency pair is trading above its 20 Hr and 50 Hr moving averages.