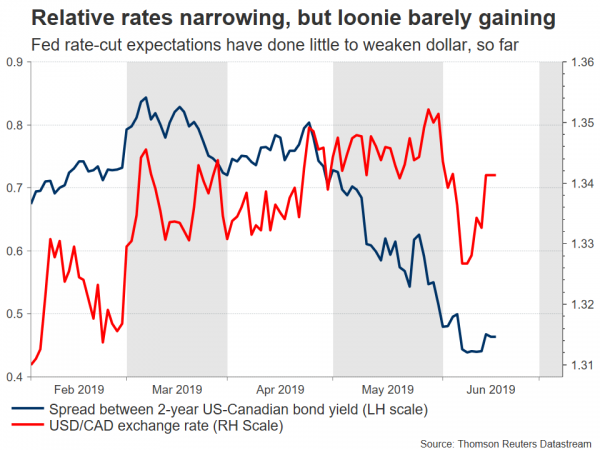 After losing some ground last week in the face of a stronger US dollar and softer oil prices, the Canadian dollar will now turn its sights to the nation’s inflation and retail sales figures, due out on Wednesday and Friday respectively at 12:30 GMT. Forecasts point to a solid set of data overall, which could highlight what seems like a divergence between Fed and BoC policies, and thereby lift the loonie.

The loonie has been largely unable to gain traction recently, even despite US-Canada interest rate differentials narrowing in its favor amid mounting bets for Fed rate cuts, and market risk sentiment improving drastically. The fact that the US will not be levying tariffs on Mexico did not lead to sharp gains for the Canadian currency either. Granted, part of the underperformance is likely owed to the drop in oil prices, but even accounting for that, the currency still looks relatively soft considering that the Bank of Canada (BoC) is among the few central banks that the market doesn’t expect aggressive easing from in the near term.

This could therefore be a decisive week for the loonie, as a potentially solid set of Canadian data coupled with a dovish Fed could underscore this divergence in monetary policies – and propel the loonie higher in the process.

On Wednesday, the nation’s CPI figures for May are expected to show that inflation picked up to 2.1% in yearly terms, from 2.0% earlier. Indeed, the forecast is supported by the Markit manufacturing PMI for the month, which noted a ‘solid uptick’ in prices charged by firms. Likewise, the retail sales for April that are due for release on Friday are anticipated to clock in at 0.2% on a monthly basis, much lower than the robust 1.1% previously, but still a positive print overall.

If the actual prints meet expectations, that could send dollar/loonie lower, with initial support to declines likely to come near the 200-day simple moving average (SMA), currently at 1.3278. A downside break could open the way for a test of the June 10 lows, near 1.3225.

On the other hand, a negative surprise in these data – or perhaps a less cautious tone than markets are expecting from the Fed – may send the pair higher, perhaps for another test of the 1.3565 area.

In the bigger picture, besides the quality of domestic Canadian data and how dovish the Fed is this week, the other key determinant for the loonie will be what trade signals come out from the G20 meeting next week. Namely, whether the US and China will resume negotiations soon, and by extent provide relief for commodity-linked currencies. Separately, what OPEC does at its own meeting, which is rumored to take place in the middle of July, could also prove crucial.