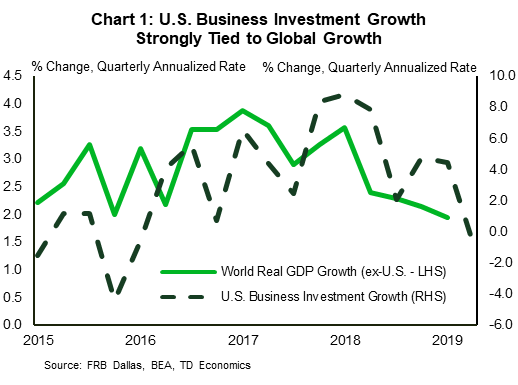 HIGHLIGHTS OF THE WEEK

U.S. – The Fed is Not Done Cutting Rates

Events this week caused a lot more turmoil than usual for financial markets in mid-summer. Global financial markets reacted quickly and negatively to mixed messaging by Federal Reserve Chair Jerome Powell. The very next day, a tweet by U.S. President Trump called for a 10 % tariff on the remaining $300bn in untariffed Chinese imported goods beginning September 1st. Any goodwill from the Federal Reserve was quickly thrown into reverse. Global equity and commodity markets sold off with investors seeking the safety of government bonds. The tweet came after talks broke down during a brief meeting between trade representatives from the U.S. and China.

Tackling these two events separately, financial markets wanted more clarity on the Fed’s commitment to further rate cuts. First off, many were puzzled as to why rates were cut at all given the solid performance of the U.S. economy. The data this week confirmed that global developments had yet to take a significant toll on domestic economic activity. July payrolls came in as expected, with 164k jobs created, and wage growth firmed up slightly to 3.2% y/y. What’s more, consumer spending for June expanded at a healthy pace, and core inflation registered a slight improvement. Lastly, although motor vehicle sales slowed to a 16.9 million annual pace in July, this remains in line with expectations for 2019 as a whole.

The reason why the Fed is cutting is simple. The data reflects past performance, and forward-looking surveys offer a slightly less favorable outlook. For example, July’s ISM manufacturing survey again edged down and is close to tipping into contraction. Moreover, growth in world GDP is strongly correlated with domestic business investment with a short lag (Chart 1). As a result, the half-point decline in global growth since last year has weighed on business investment enough to shave about a tenth of a point off U.S. growth.

This week’s 25 basis-point cut should help to offset the impact of a slowing global economy on domestic growth, but it’s likely not enough to insure against the fallout from past tariff actions. A follow-up rate cut in September should help alleviate some of the pain. However, recent steps by the U.S. administration to place tariffs on the remaining Chinese imported products is likely to now take a deeper bite out of economic activity (Chart 2). This last tranche of goods tilts more heavily towards consumer products and could eventually result in higher consumer prices than previous tariff actions. Furthermore, China is likely to retaliate by taking further actions to impede U.S. business activity in the country. It may also choose to let its exchange rate depreciate beyond US $7, an important psychological threshold that could send tremors through global financial markets.

With no end in sight for trade tensions, any larger-than-anticipated negative impact on consumer spending, confidence and business investment would likely call for even lower interest rates to help support U.S. economic growth.

Global markets had more than a few trigger points this week. Mid-week, all eyes were on the U.S. Federal Reserve, where Chair Powell delivered a rate cut together with a statement that struck a decidedly neutral tone (see commentary). This drove some market gyrations, but the main event was yet to come. On Thursday, President Trump announced via Twitter that the U.S. would impose a 10% tariff on the remaining $300 billion of imports from China that had previously been left untouched. Markets sold off on the news and were still in the red at the time of writing.

These external developments left a dour mark on what was otherwise a fairly constructive week for the Canadian economy. Wednesday saw May GDP came in above market expectations, with a 0.2% month-on-month gain reported. Combined with solid, upwardly revised activity in the prior months, the May data contributed to the best three-month string of GDP reports since mid-2017 (see commentary). Some of the gains, notably in real estate activity and manufacturing were likely one-offs as these sectors shook off earlier impediments. Still, the overall strength of the past few months has pleasantly surprised and sent our tracking for second quarter growth to 3% annualized – a fair bit above the Bank of Canada’s July forecast of 2.3%.

The other part of the story was the June international trade data. Volatility was the name of the game, with aircraft shipments giving up part of their outsized gain in the prior month (see commentary). Even so, goods exports surged for the quarter as a whole, rising roughly 15% annualized (Chart 2). Imports, conversely, were down somewhat – not the strongest sign for the health of domestic demand, but possibly related to elevated inventory levels.

The softer end to the quarter in the trade data suggests that the recent string of one-off lifts to activity is fading. This suggests a more trend-like pace of expansion is likely to prevail over the latter half of 2019. And the theme of downside skew in the risks facing the Canadian economy is not going anywhere. As we were reminded by President Trump, trade uncertainty is still with us. Even though we are no longer in the cross-hairs, Canada is still likely to experience some collateral damage. Our past research has shown that there is little overlap between what Canadians produce and what the U.S. imports from China, limiting near-term opportunities to gain market share. At the same time, confidence effects can be significant, and global supply chains are bound to be impacted by the further thickening of borders.

Perhaps most importantly, markets are becoming increasingly concerned about global growth prospects and the demand for major commodities, with clearly negative impacts on Canada. The benchmark U.S. crude oil contract, for example, dropped roughly $3 per barrel in the wake of President Trump’s announcement. All of this is to say that while domestic conditions are healthy at present, still more external speedbumps are forming on the road ahead. Buckle your seatbelts.

TD looks for the Canadian economy to add 10k jobs in July in a further moderation from the robust performance observed in 2018Q4/2019Q1. The goods-producing sector should provide the main engine for job growth following the loss of 30k positions in June; while manufacturing firms may be hesitant to add back workers given ongoing trade tensions, the recent strength of residential construction suggests last month’s 7.5k decline should be short-lived. Elsewhere we look for details to show a rebound in part-time employment, which has seen a 26k decline since May, alongside an unchanged 5.5% unemployment rate. Wage growth should get more attention than usual owing to the recent surge in SEPH earnings for May, which left both measures of monthly wage growth over 3% y/y. Base-effects will provide a tailwind to wage growth for permanent workers as AHE fell by 0.3% in July 2018, however we expect this to be partially offset by mean reversion after the largest one-month increase since 2004, leaving wages up 3.8% y/y.

Housing starts are expected to slow to a 220k pace in July, down from 246k, on a pullback in multi-family housing starts from record levels observed in June when developers broke ground on 185k units. Single family starts are also susceptible to some giveback after rising 30% from the February lows since we have yet to see any significant pickup in permit issuance. On a regional basis, we look for a broad-based slowdown given a heatwave across Eastern Canada and mean reversion in the West; housing starts for BC were 10% higher in June than any other month on record, while a 40% m/m increase saw Alberta housing starts hit their highest level since mid-2018. While our forecast implies a 10% m/m decline, it would still leave starts above the six-month trend, underscoring the recent strength of residential investment in Canada.