China played its exchange rate weapon this week to prove that it has the means to fight a tougher trade war with the US, but the Chinese government, like its major counterparts, also needs a solid economic floor to survive a bigger turmoil. Hence, trade and inflation data out of the country early on Thursday and Friday could be treated as clues on whether the world’s second biggest economy should proceed with more stimulus to enhance its financial dynamics.

In the second quarter, the Chinese economy recorded its weakest annual growth pace in almost three decades (6.2%), with the services sector sharply slowing down and the manufacturing industry remaining in the contraction area according to the Caixin PMI survey. GDP growth readings could have been even worse if the authorities did not stimulate consumer spending through cutting taxes and lowering the reserve requirements the banks are asked to hold. But with Washington refusing to step back on its trade and intellectual property rights demands, and Beijing showing no compromise, questions are arising about how much longer consumers could feed economic growth.

Chinese businesses have been struggling with US import tariffs for more than a year now, seeing their new export orders tumbling as their US partners looked for alternative purchases to avoid additional costs. On Thursday, July’s trade update is expected to show a sharper decline of 2.0% y/y in exports compared to June’s fall of 1.3%. Imports are also projected to contract more rapidly by 8.3% versus 7.3% in the preceding month, flagging softer domestic demand.

Consequently, China’s trade surplus with the rest of the world could narrow from $50.98 billion to $40bn. In the bigger picture and in terms of expansion, such a result may not bring much of a worry since this would still be above the 5-year average and therefore growth-supportive for the third quarter. But with the Trump administration threatening to impose an additional 10% import tariff on Chinese goods in September, it seems that the worst has yet to come for the Chinese business sector and the rest of the world. 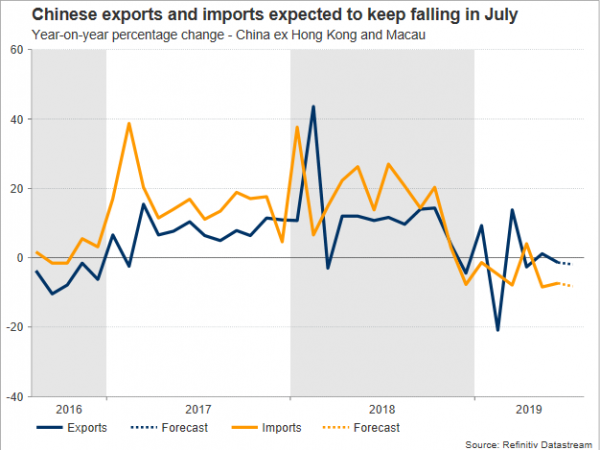 Business confidence is the main problem

US clients could bring their orders for Chinese products forward to avoid a potential hike in import expenses, pushing China’s exports higher in the coming months. Nevertheless, the business confidence for new capital spending will presumably stay muted as markets see no end in sight to the bitter trade game. In addition, demand for labor could theoretically weaken and consumption narrow in the aftermath, unless the government further boosts liquidity.

On Monday, China used a more drastic strategy to retaliate to the US’ new threats and proved that is not ready to give in to the trade war first. While similar occasions in the past ended with both sides exchanging tariff warnings, this time the People’s Bank of China decided to bring out its currency weapon to remind the US that among others, it can also adjust its exchange rate tool to offset any economic headwind. By allowing the yuan to depreciate below the 7 key-level against the greenback, the central bank, which sets a daily rate for the yuan, makes Chinese products cheaper overseas and therefore provides an export advantage to domestic producers.

The move also proved that although headline inflation continues to trend below the 3.0% target, monetary easing through lower interest rates is not on the cards yet as in other major economies. Instead, the government among others could provide lower taxes, promote infrastructure spending, and even maintain the offshore yuan above 7 per dollar in the future to keep economic growth at a healthy pace and within the 2019 growth target of 6.0-6.5%. Note that the headline CPI, is projected to arrive steady at 2.7% y/y on Friday and any unexpected weakness in the measure could be also perceived as negative for domestic demand. 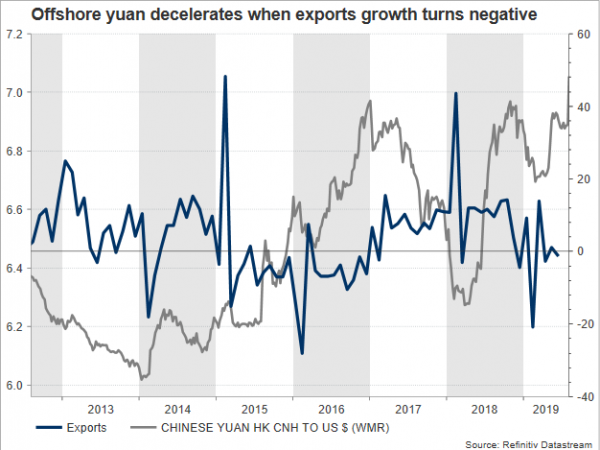 All in all, the current developments in the trade context are strongly disruptive for the yuan but also for its liquid proxies such as the Australian dollar. Any discouraging news related to China’s economic performance including Thursday’s trade stats and Friday’s inflation data could weigh on the aussie, sending AUDUSD back down to the new 10 ½-year low of 0.6676, while lower, the way could open towards the 0.6437-0.6385 region amid speculation that China might release more stimulus in the coming months to balance the economy.

In case the numbers arrive better-than-expected, AUDUSD could hit the restrictive 20 simple moving average (SMA) in the four-hour chart currently at 0.6766, where any decisive close higher may open the door for the 0.6800 round level and the 50-SMA at 0.6830.