Although the market generally expects RBA to leave the cash rate unchanged at 1% this week, the chance of a surprise cut is not negligible. Despite mild pickup in confidence after the back-to back rate cuts in June and July, risks to economic outlook remains to the downside. Policymakers should be obliged to lower interest rates further later this year. Both September and October are feasible timing for further easing. Yet, the members might choose the latter if they opt to gauge the effects of previous easing for some more time. We believe November would be rate later, posing a risk that another consecutive cut in December might be needed. 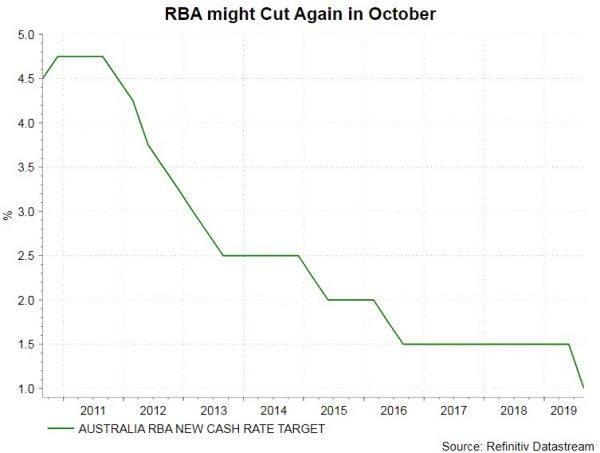 The job market improved in July but remained far from RBA’s target. The number of payrolls soared +41.1K, beating consensus of +14K increase and July’s +0.5K. Yet, the unemployment rate stayed unchanged at 5.2%, way above RBA’s long-term unemployment rate of 4.5%. GDP growth for 2Q19 would be released a day after the central bank decision. Yet, we do not think this would affect the decision materially. The market expects that GDP should have expanded +0.5% q/q in 2Q19, up slightly from +0.4% in the first quarter. From a year ago, GDP is expected to have grown +1.4%, easing from +1.8% in the first quarter. 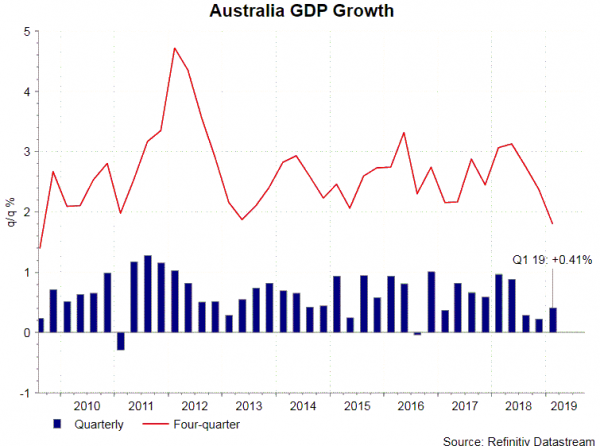 The forward looking indicators fail to forecast a better outlook. The Markit/ Commonwealth manufacturing PMI slipped -0.7 point to 50.9. While staying in the expansionary territory (above 50), the growth rate has slowed for two months in a row. As noted in the accompanying report, there is “a further softening of demand conditions midway through the third quarter”. On the supply side, “overall new orders rose at the second weakest pace in the survey history. Meanwhile, the demand conditions also softened, leading to “a further development of spare capacity among Australian factories”.

Besides warning over economic slowdown, Governor Phil Lowe warned about political uncertainty surrounding the world at the Jackson Hole symposium,. He indicated that the world economy is “experiencing a period of major political shocks which are turning into economic shocks”. On the monetary policy outlook, Lowe added that “monetary policy cannot deliver medium-term growth”, but “just pushed up asset prices”.

The focus of the September meeting is likely the forward guidance. In August, RBA indicated that it would “continue to monitor developments in the labour market closely and ease monetary policy further if needed to support sustainable growth in the economy and the achievement of the inflation target over time”. While guiding an easing bias in future monetary policy, it did not signal the urgency of action. Recall that in June, when RBA surprising cut the cash rate by -25 bps, its forward guidance was the same as above, with the exception that “if needed” did not appear. This led to another rate cut in July.