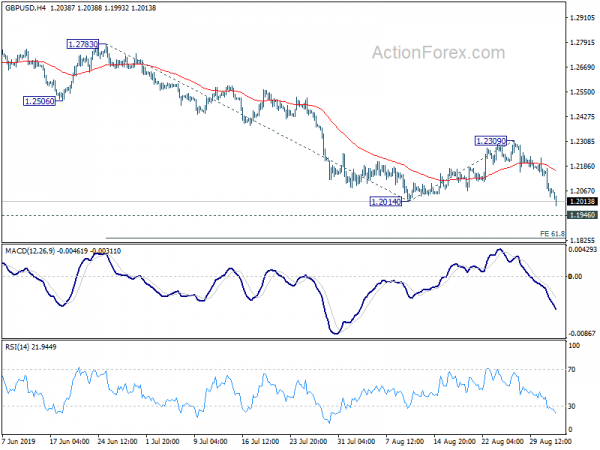 Sterling’s selloff continues today as UK is entering into two crucial days regarding Brexit, and general election cold be called. Euro also follows as the second weakest on ECB easing expectations. On the other hand, Dollar is the strongest one as markets are awaiting more news on US-China trade war, which seems not to be escalating further. Australian Dollar reversed earlier gains after RBA stands pat.

Technically, GBP/USD’s break of 1.2014 indicates decline resumption for 1.1946 (2016 low). We’d remain cautious on support from there to bring rebound. But sustained break will resume long term down trend too. 0.9157 minor resistance in EUR/GBP and 126.54 support GBP/JPY would be watched to confirm broad based selling in the Pound.

A group of UK lawmakers are expected to put forward a vote on Tuesday to seize control of the parliamentary business. The target was to pass legislation to force a three month delay to October 31 Brexit date. If such case is pushed through, Prime Minister Boris Johnson is expected seek a vote to hold a general election the next day, on October 14.

Without giving any details on his plan, Johnson said outside his office that “I want everybody to know there are no circumstances in which I will ask Brussels to delay: we are leaving on 31st October, no ifs or buts.” And, “we will not accept any attempt to go back on our promises,” he added. “I don’t want an election. You don’t want an election. Let’s get on with the people’s agenda.”

Separately, Brexit Minister Stephen Barclay said in an interview yesterday that EU should be open to “creative and flexible” solutions to the Irish border backstop. He also reiterated that “we will leave the EU on October 31, whether with or without a deal.”

RBA stands pat, Aussie pares losses as there is no further dovish turn

RBA left cash rate unchanged at 1.00% as widely expected. Australian Dollar pares back some of earlier loss as the central bank doesn’t turn more dovish in the accompanying statement, even though easing bias is maintained. Instead, RBA just noted that “it is reasonable to expect that an extended period of low interest rates will be required”. And the board will continue to “monitor developments, including in the labour market, and ease monetary policy further if needed”.

RBA expected growth to “strengthen gradually to be around trend over the next couple of years”. Main domestic uncertainty continues to be consumption outlook. However, wages growth remains “subdued” with “little upward pressure”. And the Australian economy can “sustain lower rates of unemployment and underemployment”. Inflation pressures also remain “subdued”. On the positive side, there are “further signs of a turnaround” in housing markets, especially in Sydney and Melbourne. Such stabilization is expected to support spending.

Released earlier, Australia retail sales dropped -0.1% mom in July, below expectation of 0.2% mom. Current account surplus widened to AUD 5.9B in Q2, above expectation of AUD 1.5B.

GBP/USD’s decline continues today and break of 1.2014 indicate larger decline resumption. Intraday bias stays on the downside for 1.1946 low. We’d be cautious on bottoming there. But decisive break will target 61.8% projection of 1.2783 to 1.2014 from 1.2309 at 1.1834. On the upside, break of 1.2309 resistance is needed to confirm short term bottoming. Otherwise, outlook will remain bearish in case of recovery. 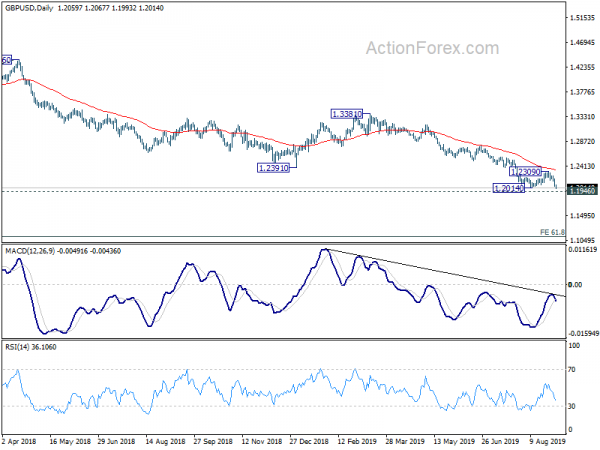