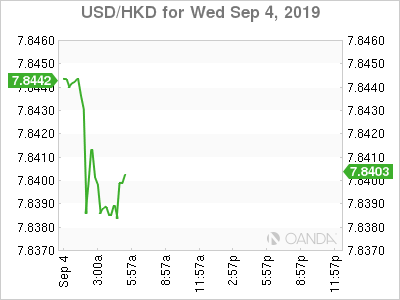 After a summer filled with protests, Hong Kong leader Carrie Lam will announce the withdrawal of the Chinese extradition bill at 6pm local time. The MSCI Hong Kong Index posted its best gain since 2011 with a 5.4% surge, a rally that was much higher than three standard deviations. While the extradition bill was initially what sparked a tumultuous summer in Hong Kong, protesters’ demands have expanded to also include full democracy and police accountability.

Violence might ease in Hong Kong, but the protests are likely to continue until we see the other four demands met; Beijing accepting of Lam’s resignation, an inquiry into police brutality, the release for those who have been arrested and more democratic freedoms. Today’s withdrawal is quite the pivot from yesterday’s comments from China’s top office that hinted they could unilaterally declare a state of an emergency.

Hong Kong protesters seem focused on a September 8th rally that will petition US congress to pass the Hong Kong Human Rights decency, a possible major complication that could derail longer-term solution. Beijing’s concession here appears to have happened too late and we may just see temporary reprieve with Hong Kong assets. The Hong Kong dollar is higher by 0.06%.