Yen Lower on Return of Risk Appetite, Sterling Support by Hope of No No-Deal Brexit

However, it should be noted that only one of the five demands of the protesters is met. It’s seen generally as being “too little, too late”. Most importantly, the widely supported demand of an independent judiciary on police brutality was rejected. Threat of being a police state remains. Protests in Hong Kong would not stop at this stage, in particular with the debate of HK human right and democracy act in US Congress scheduled for next week.

Staying in the currency markets, Dollar is currently the second weakest, followed by Canadian Dollar. The Loonie is cautious ahead of BoC rate decision. While BoC is widely expected to stand pat, there could be a dovish turn in the accompanying statement. On the other hand, Sterling is the strongest one, riding on hope of averting no-deal Brexit. Australian Dollar is the second strongest, followed by Euro.

US trade deficit narrowed to $54.0B, deficit with China also dropped

Also released, Canada trade deficit widened to CAD -1.1B in July, versus expectation of CAD 0.2B. Labor productivity rose 0.2% qoq in Q2, above expectation of 0.1% qoq.

UK PMI Services dropped to 50.6 in August, down from 51.4 and missed expectation of 52.0. Markit noted weaker rises in business activity and new work. Margins were squeezed by sharpest cost inflation since January. Growth projections also dropped to lowest since July 2016. All Sector Output Index dropped from 50.3 to 49.7, second sub-50 reading in three months.

Chris Williamson, Chief Business Economist at IHS Markit, said: “Business activity in the service sector almost stalled in August as Brexit-related worries escalated, curbing spending by both businesses and consumers. So far this year the services economy has reported its worst performance since 2008, with worrying weakness seen across sectors such as transport, financial services, hotels and restaurants, and business-to-business services.

“After surveys indicated that both manufacturing and construction remained in deep downturns in August, the lack of any meaningful growth in the service sector raises the likelihood that the UK economy is slipping into recession. The PMI surveys are so far indicating a 0.1% contraction of GDP in the third quarter.”

In UK, lawmakers will start debate of Labour lawmaker Hillary Benn’s bill to block a no-deal Brexit at 1500GMT. Votes on the bill should be held before 1900GMT. It’s highly likely for the bill to be supported. Then Prime Minister Boris Johnson will seek a general election, possibly with a vote at 2030GMT.

Ahead of today’s schedule, Labour Leader Jeremy Corbyn said the party would not fall for “Boris Johnson’s tricks”. And they would not support a new election until the threat of no-deal Brexit is removed. His office said in a statement: “Jeremy made clear that Labour wants a general election, and soon, but that we will not fall for Boris Johnson’s tricks.” “He said Labour will not support a general election until we are confident that the threat of no deal has been removed.”

Chris Williamson, Chief Business Economist at IHS Markit said: “The eurozone remained mired in a fragile state of weak and unbalanced growth in August. Although up on July, the latest reading indicates that GDP will rise by just 0.2% in the third quarter, assuming no substantial change in September. Official data available so far for the quarter suggest growth could be even weaker… The big question is how long this divergence can persist before the weakness of the manufacturing sector spreads to services and households… We therefore expect to see renewed stimulus from the ECB in September as the central bank seeks to revive demand and stem the spreading malaise.”

Lagarde: ECB needs to listen and understand markets, but not guided by

ECB President nominee, IMF Managing Director Christine Lagarde, told European Parliament that “the challenges that warrant the ECB’s current policy stance have not disappeared.” And, “a highly accommodative policy is warranted for a prolonged period.” At the same time, she emphasized that “the ECB needs to listen and understand markets,” but “it need not be guided by markets.”

Also, monetary framework review is warranted given that it was a “long time ago” since last review in 2003. She said, “My strong belief is that the cost-benefit analysis and possibly a review of the monetary framework, that would have to be conducted, not just by the ECB, but also in coordination with other central bank institutions from around the world, is warranted, given the circumstances.”

ECB Chief Economist Philip Lane said that inflation is staying well below target, but there is no deflation risk yet. He said, “The most recent financial data says there is a lot of weight attached to mediocre inflation outcomes, inflation outcomes between 0 and 1.5%, below the aim of the ECB.”Also, he noted that scale of slack in the Eurozone remains extensive.

Australia GDP grew 0.5% qoq in Q2, matched expectations. Annual growth slowed to 1.4%, way slower than 3.1% a year ago and was the worst since 2009. ABS Chief Economist for Bruce Hockman, noted “the external sector drove GDP growth this quarter, while growth in the domestic economy remains steady”. Net exports added 0.6% to Q2’s growth, reflecting strong exports of mining commodities. He added, “strength in mining related activity was seen across a number of measures in the economy”.

According to Westpac, today’s data strengthened the case for further RBA rate cut in the very near term. To achieve RBA’s growth forecasts of 2.5% for 2019, the economy needs to register 1.6% growth in the second half. That’s seen as out of reach while recent retail and housing data were also disappointing. Westpac expects another RBA cut in October.

Australia AiG Performance of Services Index rose 7.5 pts to 51.4 in August. That’s a return to mildly positive conditions following a weak month in July. Also, trading conditions for some businesses picked up, returning to similar levels seen earlier in the year.

Looking at some details, there were expansions in four of eight services sectors in trend terms. However, among the business-oriented sectors, only finance & insurance reported positive results. Among the consumer-oriented segments, the ‘health, education & community services’ sector was strongest and the retail trade sector continued to perform very weakly.

China Caixin PMI Services rose to 52.1 in August, up from 51.6 and beat expectation of 51.8. PMI Composite rose to 51.6, up from 50.9. Caixin noted that manufacturers and services provides both saw improved rates by business activity growth. The composite new orders expanded at the quickest rate for four months. Also, total employment increased for the first time since April.

Zhengsheng Zhong, Director of Macroeconomic Analysis at CEBM Group said: “China’s economy showed clear signs of a recovery in August, especially in the employment sector. Countercyclical policies took effect gradually. However, the Sino-U.S. trade conflict remained a drag, and business confidence remained depressed. Still, there’s no need to be too pessimistic about China’s economy, with the launch of a series of policies to promote high-quality growth.” 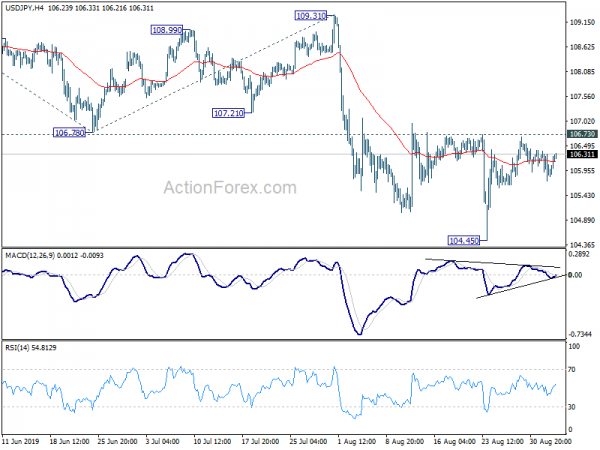 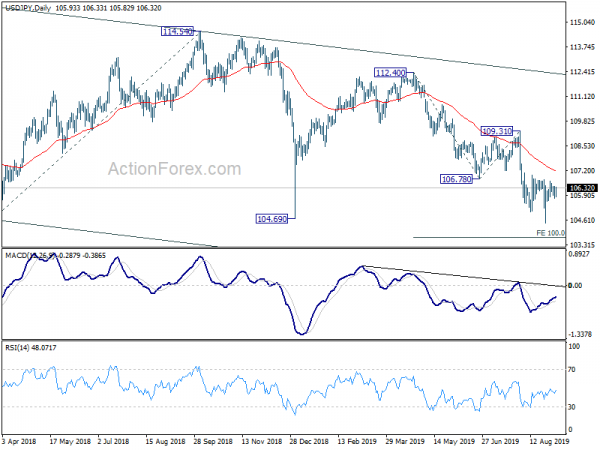