Risk aversion eased notably further last week as some of the imminent risks receded. New Italian government was sworn in as 5-Star Movement and bitter rival Democratic Party agreement to form a coalition. UK lawmakers passed a bill to force Prime Minister Boris Johnson to delay Brexit if no deal could be made. Johnson’s push for general election in October also failed so far. Most importantly, US and China appear to be back on negotiation table and the teams are working towards a face-to-face meeting in October.

Over the week, commodity currencies ended as the strongest ones, as led by New Zealand, Australian and then Canadian Dollars. Yen was the weakest with the turn on sentiments, followed by Dollar and then Swiss Franc. Euro and Sterling are mixed. Euro will face the risk of ECB monetary easing this week. Pound will continue to pay attention to UK political and Brexit developments.

US-China to meet on trade again in Oct, risk of escalation receded

Officials from US and China confirmed that they’re planning for a face-to-face trade meeting in October, after a phone call between Chinese Vice Premier Liu He, US Trade Representative Robert Lighthizer and Treasury Secretary Steven Mnuchin. Most importantly, that came after China backed down from retaliating to the latest additional 5% tariffs of US. Without Chinese retaliation, there is no excuse for US President Donald Trump to escalate trade war further for now.

Though, it would be overly optimistic to expect any form of solid breakthrough in October’s meeting. Even White House economic adviser Larry Kudlow warned that it could take years to resolve trade conflicts. He said that on Friday that “the stakes are so high, we have to get it right, and if that takes a decade, so be it.” He also said that “we would like to go back to where we were last May, but I don’t know if that’s possible, and I don’t want to predict any outcomes. This is a difficult matter.”

Market expectation on Fed rate cut remained steady after last week’s events. As of now, fed fund futures are pricing in “only” 91.2% chance of a -25bps cut this month to 1.75-2.00%. It’s at least not 100% and there is no pricing for -50bps cut. Fed Chair Jerome Powell acknowledge “significant risks” facing the US economy, citing trade uncertainty, global slowdown and muted inflation. Though, he added “we are not forecasting or expecting a recession. But he also admitted that “we are clearly at a time where there is a range of views”.

Gold got not support from Dollar, might be topping 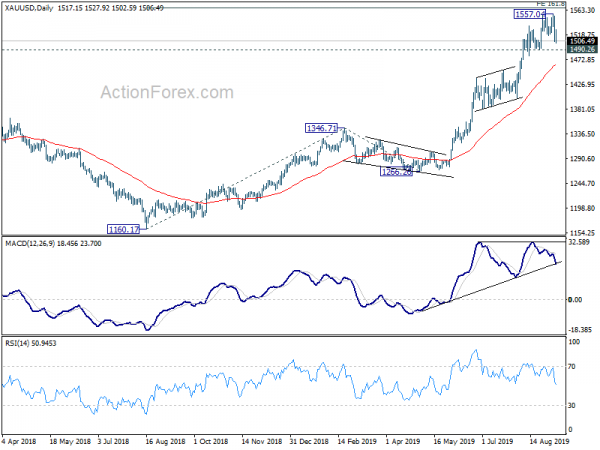 AUD/USD’s rebound from 0.6677 resumed last week and closed strongly at 0.6849. Initial bias stays on the upside this week for 0.6910 support turned resistance, and possibly above. At this point, such rebound is seen as a corrective move, thus, upside should be limited below 0.7082 resistance to bring fall resumption. On the downside, below 0.6807 minor support will turn intraday bias back to the downside for retesting 0.6677 low. 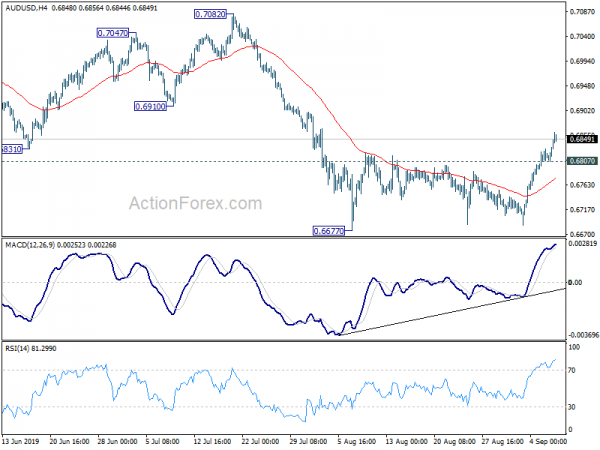 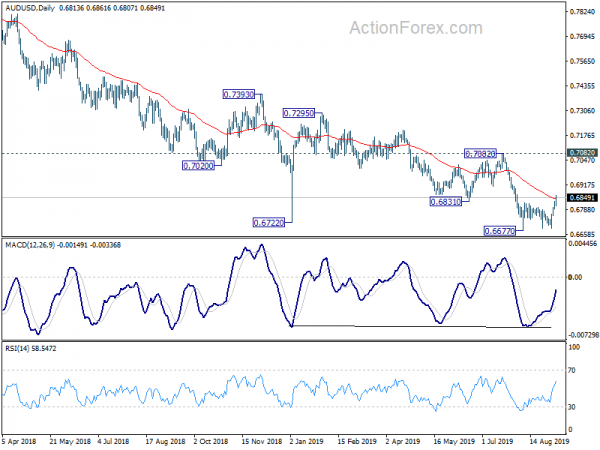 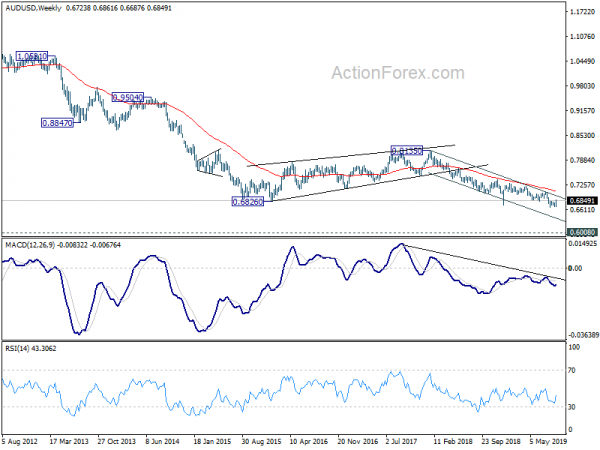 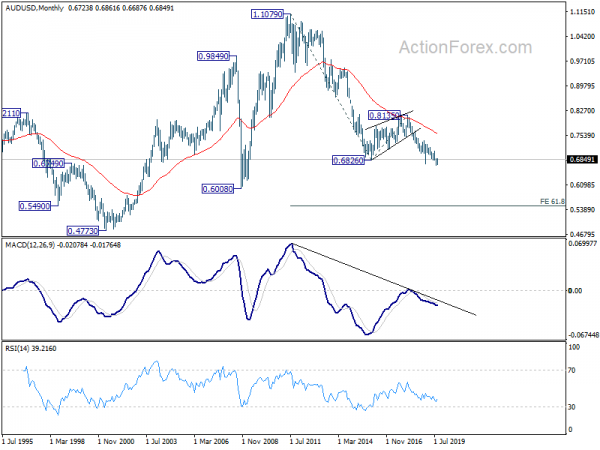