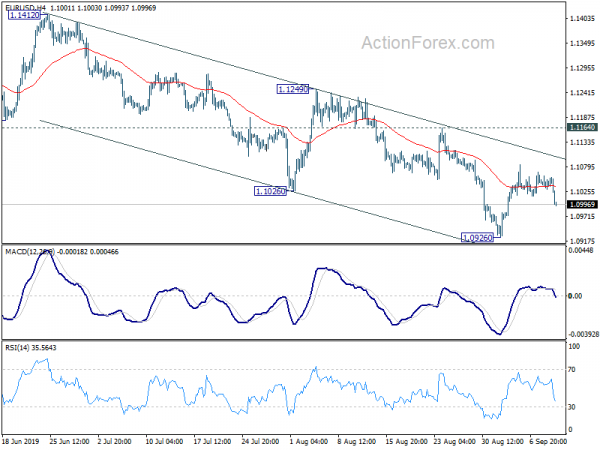 Euro weakens broadly today, in relatively quiet markets, as traders are probably adjusting their positions ahead of tomorrow’s ECB rate decision. A new package of stimulus is widely expected. Yet, opinions on the exact composition of the package is divided. Meanwhile, steady market sentiments is keeping Yen and Swiss Franc soft. On the other hand, Dollar, Australian and Canadian are the stronger ones. US President Donald Trump continues his attack on Fed. But markets are really rather used to the erratic tweets, and shrug them off.

Technically, EUR/USD’s dip today now puts focus back to 1.0926 low. Break will resume medium term down trend. EUR/AUD is also on track to retest 1.5894 support. For now, as long as 117.73 minor support in EUR/JPY holds, further rebound is still in favor. But break will turn focus back to 115.86 low. While Euro turns weak, EUR/GBP is still holding on to 0.8891 key cluster support. We’d still favor strong support from there to bring rebound.

Trump: We’re missing once in a lifetime opportunity before of Fed’s boneheads

In a pair of tweets, US President Donald Trump urged Fed to cut interest rates down to zero or less. And the US government could then start to refinance its debt. He complained again that it’s only “naivete” of Fed chair Jerome Powell” for not allowing the US to pay lowest interest rate.

He said “The Federal Reserve should get our interest rates down to ZERO, or less, and we should then start to refinance our debt. INTEREST COST COULD BE BROUGHT WAY DOWN, while at the same time substantially lengthening the term. We have the great currency, power, and balance sheet. The USA should always be paying the the lowest rate. No Inflation! It is only the naïveté of Jay Powell and the Federal Reserve that doesn’t allow us to do what other countries are already doing. A once in a lifetime opportunity that we are missing because of “Boneheads.”

China exempts 15 categories of US imports from tariffs

Today, China announced to exempt a range of US imports from the 25% tariffs imposed last year. The exemptions cover 16 categories of products, ranging from fish food to pesticides, and will be effective from Sept. 17 to Sept. 16 2020. Negotiations between the teams are continuing, in preparation for top level meeting to be held in Washington next month.

Johnson’s spokesman, on the other hand, said he has absolute respect for the independence of the judiciary. However, they’re still going to appeal the Scottish court’s ruling.

Referring to two consecutive quarters of contraction, “Germany thus formally meets the definition of a ‘technical recession’, but this is not yet associated with a macroeconomic underutilization of capacities. Only in such a case could we speak of a recession in the sense of a cyclical phenomenon,” said Stefan Kooths, Head of the Forecasting Centre at the Kiel Institute for the World Economy.

Kiel said the economic outlook has been adversely affected above all by the political uncertainty caused by trade conflicts and the Brexit crisis, with investment and exports coming under particular pressure. Kiel Institute President Gabriel Felbermayr criticized that “the real problem with Donald Trump’s trade disputes is not the tariffs themselves, but the great uncertainty about what is to come. Uncertainty is poison for investment decisions.”

NAB expects RBA to cut to 0.5% by February, more stimulus might be needed afterwards

Australia’s NAB revised their RBA interest expectations today, now factoring in an additional rate cut in February, in addition to one in November, to take cash rate to 0.50%. NAB also said RBA “could cut as soon as October if there was further weakness in the labour market revealed next week.”