Commodity-driven currencies such as the Australian, New Zealand and Canadian dollars are enjoying a bit of a reprieve from an extended sell-off as rekindled hopes of a US-China trade deal and increased stimulus around the world have energized the struggling currencies. But despite early indications that the upcoming trade talks may actually produce substantive progress, the range of factors weighing on the aussie, kiwi and loonie means more downside is likely to come.

The ongoing trade war has dented the outlook for commodities as, aside from the fact that China is the world’s biggest consumer of commodities, the resultant economic slowdown globally from protectionist policies is further dampening the demand picture. 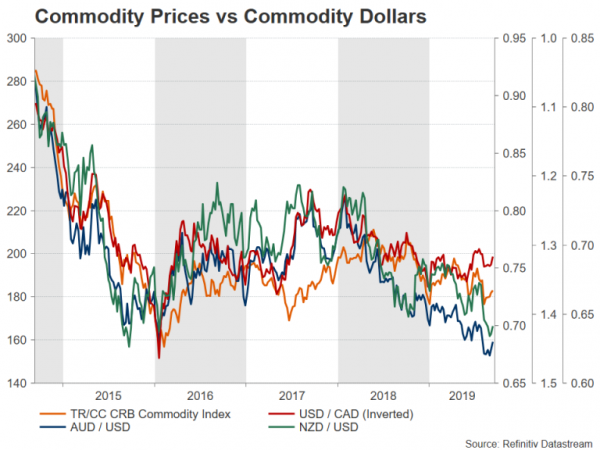 Australia has potentially the most to lose from a worsening and prolonged trade conflict as the largest chunk of its exports are shipped to China, of which are mostly comprised of commodities. Canada is also at significant risk as it relies heavily on energy exports and its economy is closely tied to the United States, while New Zealand’s exposure to world trade makes it vulnerable to disruptions in trade flows.

But although none of the said countries are presently at risk of a recession, their currencies have been under pressure for most of the year. Market expectations earlier in the year that policymakers will not be able to fulfil their tightening ambitions turned to bets that the next move in interest rates will be down as the economic outlook deteriorated while the trade war saga dragged on. 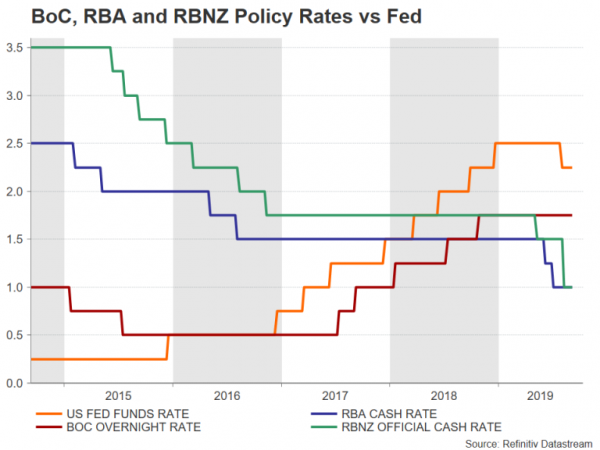 RBA easing cycle may be short

The Australian dollar has been on a downtrend since the early parts of 2018, when the synchronised global growth story unexpectedly started to run its course. Markets were quick to adjust their expectations that the Reserve Bank of Australia will not be able to follow through with its intention of raising the cash rate. But the bank was slow to respond to the changing economic landscape and even now, having embarked on a rate cutting cycle, its growth projections are considered to be overoptimistic.

The RBA has lowered rates twice since the summer and is expected to cut again before the end of the year. Most economists think one more cut will be needed after that, which would take the cash rate to 0.5% from the current 1%. Should the rate cuts fail to provide enough of a boost to the Australian economy, the RBA might have to resort to quantitative easing.

At the moment, however, the bank thinks this is unlikely and it is probably right. Although Australia’s economy has been underperforming, it’s still growing faster than many of its peers, and in addition to monetary stimulus, the Australian government recently announced tax cuts, providing an added fiscal boost. The continued support by Chinese authorities for their economy also minimizes the risk of a major downturn in Australia.

Few more hurdles to overcome before aussie can turn bullish

All of this suggests there may not be much further to go for the aussie in this downtrend even if the US-China trade dispute remains unresolved. Should rate cut expectations not alter significantly over the coming months, commodity prices could resume their status as the biggest driver of the aussie. A surge in iron ore prices in June/July offset the aussie’s declines when the RBA switched to an easing bias. But the aussie is also sensitive to volatility in the Chinese yuan as well as to Fed rate cut expectations. 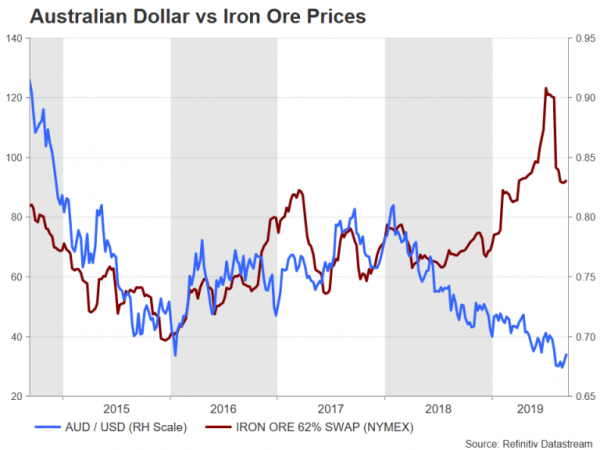 The latest downleg in the aussie, kiwi and loonie that began on July 19 was triggered from the unwinding of aggressive rate cut bets by the Federal Reserve, which pushed the US dollar higher. Any shift in the number of rate reductions the Fed is expected to deliver over the course of the next 12 months is sure to affect these currencies in similar fashion.

The aussie is currently attempting to break above the $0.6885 region, which is the 78.6% Fibonacci retracement of the up move from $0.6829 to $0.7082. A successful close above this level could indicate that the current uptrend is sustainable, though overcoming the 61.8% Fibonacci at $0.6926 is just as critical for a bullish signal. The next big challenge for the bulls will be the 200-day moving average, which is in close proximity to the $0.70 handle.

In a worst-case scenario that policymakers around the world fail to avert a deep downturn and the RBA is forced to slash rates to 0% and turn to unorthodox monetary policy tools, the aussie’s descent could stretch as far down as $0.6420 – the 261.8% Fibonacci extension.

Like its aussie counterpart, the Canadian dollar also fell steeply between mid-July and early September. However, prior to that drop, the loonie had posted year-to-date gains versus the greenback, supported by a comparatively hawkish Bank of Canada and a partial recovery in oil from the late-2018 price slump. But despite the Canadian economy showing little sign of being hit by the US-China trade spat, the loonie is being weighed by worries about the potential fallout, given Canada’s dependency on the US economy. 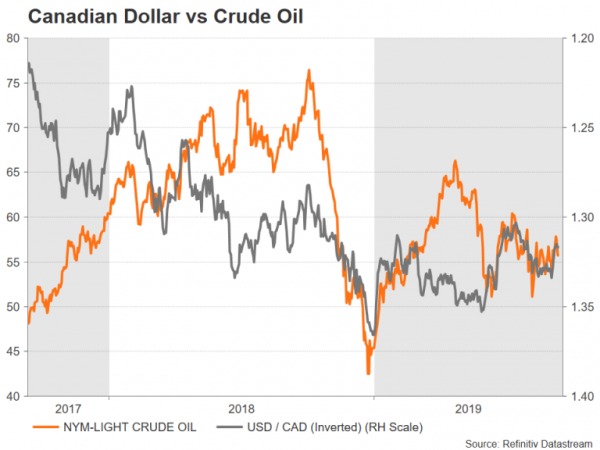 Up until the Bank of Canada’s last policy meeting on September 4, investors were certain that the bank would cut rates by 25 basis points by December. Those odds have since shifted dramatically, with markets not fully pricing a rate cut until September 2020, after the BoC maintained its neutral bias (if anything, its policy statement was less cautious than the previous one). Recent data, along with a somewhat more bullish outlook for oil prices, support the bank’s stance, with both inflation and GDP growth running above expectations in the latest readings.

Scope for plenty more gains for the loonie

But there are doubts as to how long this positive momentum can last if trade tensions do not subside anytime soon and growth in the US – Canada’s biggest trading partner – begins to sputter. If that was to happen and BoC rate cut expectations were to strengthen again, dollar/loonie could claw back towards its early September peak of 1.3382 before aiming for the 1.34 handle. However, the pair would need to beat the 2019 top of 1.3564 to break out of its long-term neutral range and signal a bearish shift for the loonie.

If, though, fears of a US and global recession do not materialize and the BoC delivers only limited policy easing, there’s scope for the loonie to significantly extend its recent gains, especially if the Fed continues to make pre-emptive rate reductions, narrowing the yield differential between US and Canadian debt. Dollar/loonie is currently being propped by its immediate support of the 61.8% Fibonacci retracement of the July-September upleg at 1.3153. Dropping below this level would strengthen the loonie’s bullish momentum, opening the way for July’s 9-month low of 1.3012. Beyond this mark, the next target for the loonie bulls would be 1.2783 – the 161.8% Fibonacci extension.

Out of the three currencies, the New Zealand dollar has been the worst performing this year as business sentiment has failed to recover from the 2017 election slide when the pro-business National party lost power to a Labour-led coalition. In fact, the country’s closely watched ANZ business confidence index has plummeted to the lowest since the depths of the 2008 financial crisis, with no boost yet from the Reserve Bank of New Zealand’s two rate cuts, totalling 75 bps. 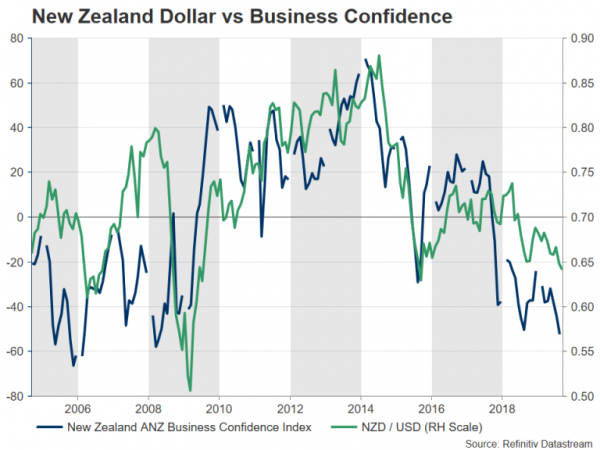 Low business confidence has been a concern of the RBNZ for some time now, although looking at the available hard data, New Zealand’s fundamentals don’t appear particularly worrying. However, the open economy is highly exposed to global trade frictions and policymakers think it’s only a matter of time before the trade uncertainty and lower business spending begin to drag on growth. Neither can muted prices for dairy products – New Zealand’s biggest export earner – be relied upon to bolster growth.

The New Zealand dollar has rebounded sharply from a 4-year low of $0.6267 plumbed on September 3 but is facing stiff resistance around $0.6445. Failure to break above this obstacle would confirm the lack of strong upside momentum and the kiwi is likely to resume its downslide, heading back towards the $0.6267 trough, before eyeing the $0.6158 area of the 161.8% Fibonacci extension of the latest upleg.

For the kiwi to achieve a credible rally above the $0.6445 resistance, there would need to be a notable ebb in trade tensions and signs from the RBNZ that its rate cutting cycle is coming to an end. Investors are expecting at least one more cut in the coming months and the RBNZ’s dovish tendency makes additional easing more likely than not. Hence, to fully shake off the negative forces, the kiwi would need to climb to at least the $0.65 level and reclaim the 50-day moving average slightly above it.

As things stand now, the risks for the commodity dollars are tilted to the downside, and the latest rally appears to be driven by a temporary improvement in risk appetite on hopes that the upcoming talks between China and the US will lead to some sort of a breakthrough. However, we’ve been here before and positive developments have always been followed by disappointment. Even if progress is accomplished, a final deal could be some time away, while the threat of punitive US tariffs on other countries is not about to disappear either.

In a scenario where the US-China trade war becomes a permanent fixture, the only relief for markets can come from collective monetary and fiscal stimulus. But with more and more central banks and governments heeding calls of increased stimulus, signs of green shoots in the global economy could start to emerge in the first few months of 2020. A weaker exchange rate should also aid the export-dependent Australian and New Zealand economies. On the other hand, the Canadian dollar could become problematic for the BoC once US rates fall below that of Canada’s and dollar/loonie is perhaps at more risk of erratic moves, particularly if there are large swings in oil prices.