European majors are generally stronger today, after Euro survived yesterday’s ECB monetary easing. Meanwhile, Canadian Dollar is broadly pressured following decline in oil prices. New Zealand Dollar is also weak after poor manufacturing data. Dollar is soft despite more positive news regarding US-China trade negotiations. Over the week, Sterling is the strongest one on hope of another Brexit delay. Euro and Australian Dollar follow as second and third. Yen is the weakest on general improvement in market sentiments, followed by Canadian.

Technically, EUR/USD defended 1.0926 key support level and is now rebounding further. Focus is back on 1.1164 resistance. We’d expect it to hold to bring down trend resumption. But firm break will be a sign of bullish reversal. EUR/GBP is still struggling in tight range above 0.8891 cluster support. Firm break there will dampen our original bullish view and bring deeper fall to 0.8797 fibonacci level and below. EUR/JPY is extending the rebound from 115.86, towards 120.48 fibonacci level next.

Trump prefers a “whole” trade deal with China, but open to an interim one

US President Donald Trump said yesterday that he’s open to an “interim” trade agreement with China, but insisted that he’d “rather get the whole deal done”. . He said “a lot of people are talking about, and I see a lot of analysts are saying: an interim deal, meaning we’ll do pieces of it, the easy ones first… But there’s no easy or hard. There’s a deal or there’s not a deal. But it’s something we would consider, I guess.”

The comments came after Bloomberg reported that Trump’s advisers are considering the idea of an interim trade agreement with China. That involve delaying or even rolling back some tariffs. In return, China has to offer commitments on intellectual property protection and agricultural product purchases.

IMF Director of Communications Gerry Rice warned yesterday that US-China trade tensions are starting to affect the world economy. He said they’re “not only a threat, but are actually beginning to weigh down the dynamism in the global economy.” And, the already imposed tariffs could “potentially reduce the level of global GDP by 0.8 per cent in 2020, with additional losses in future years”. The 0.8% figure suggested more serious impact of prior estimation of 0.5% by IMF.

World economic activity remained subdued, with trade and geopolitical tensions causing uncertainty and eroding business confidence, investment and trade, he said. Though, a global recession is not in IMF’s baseline for the moment. He added that had used words such as “very precarious”, “very fragile” and “delicate” to describe the economic outlook. And, “Let’s not get ahead of ourselves. Let’s wait and see.” IMF is scheduled to release updates on economic outlook next month.

New Zealand BusinessNZ manufacturing index rose 0.3 to 48.4 in August, indicating slightly slowing pace of contraction. However, the details are not too encouraging. The sub-index of new orders (45.6) dived further into decline, at its lowest point in over ten years since May 2009. Production (49.7) fell from expansion to decline. Employment (49.3) remains in contraction after some recovery.

BNZ Senior Economist, Doug Steel said that “disconcertingly, the PMI adds to a building case over recent times that there has been a palpable softening in demand – at least for manufactured goods”.

Yesterday, ECB has announced a new package of stimulus measure as inflation weakens. At the same time, the central bank revised lower both GDP growth and inflation outlooks for coming years. The package include deposit rate cut to -0.50%; two-tier system, restart of QE at EUR 20B per month, relaxing TLTRO borrowing conditions and change in forward guidance.

Japan industrial production was finalized at 1.3% mom. Eurozone will release trade balance. Main focus will be on US retail sales. Import price, business inventories and U of Michigan sentiment would be featured too.

EUR/USD defended 1.0926 low and rebounded strongly. Consolidation from 1.0926 is extending and further rise cannot be ruled out. But upside should be limited below 1.1164 resistance to bring fall resumption. On the downside, break of 1.0926 will resume lager down trend from 1.2555 for 1.0813 fibonacci level next. However, firm break of 1.1164 will an early indication of larger reversal and target 1.1249 resistance first. 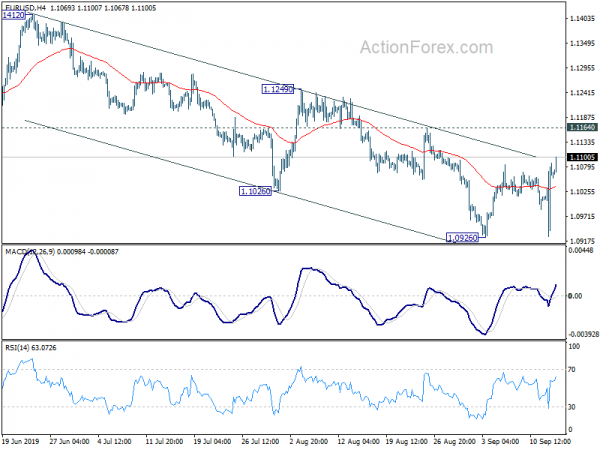 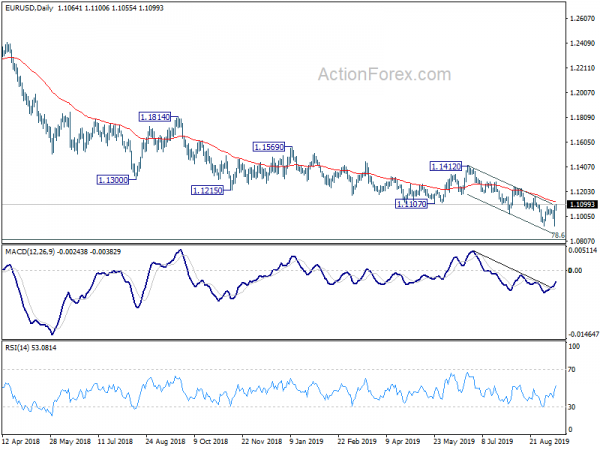