Afrophobia just one of the many risks burdening South Africa 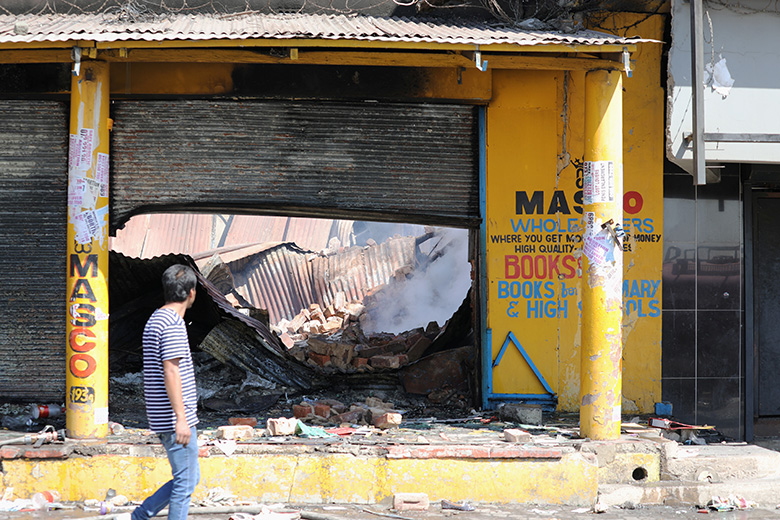 The recent media attention given to the violent attacks on African migrants and African-owned businesses has caused quite a stir, but there is reason to believe the story has been blown out of all proportions from a country-risk perspective.

Analysts have been quick to point out South Africa is used to violent attacks, though others are also keen to add it may have some implications, simply by adding to an already weakened risk profile.

“It started with taxi-owners taking the law in their own hands and chasing away Nigerian drug lords from their pick-up areas,” says one analyst who requested anonymity.

The analyst adds: “Nothing happened in any other city in South Africa – and the looting that followed even affected South African shop owners, which basically provides evidence to the opportunism and criminality that used the small conflicts to help themselves to foodstuffs and other items.”

Certainly, violent attacks are nothing new, fuelled by the thin end of a huge wealth divide, with mass unemployment rarely given much thought among international experts concerned by trade frictions, or Europe’s plight, and local politicians stirring the pot with a bogeyman to blame.

On that score, little has changed, though it may get worse.

And the media attention is hardly endearing to South Africa’s tarnished reputation as an emerging market (EM), notably in light of the calls to boycott South African business when the African Development Bank and African Union are eager to talk-up the region and proceed with the African Continental Free Trade Area.

Its heightened risks are well-documented, with Euromoney’s survey showing how the outlooks of economists and other experts have gradually worsened.

Although South Africa is still considered one of the continent’s safer investments, it is not the safest. That accolade goes to Botswana.

All this instability unfortunately is raising South Africa’s political risk premium and, if not curtailed, could counter the government’s drive to revive domestic business confidence and mobilize foreign investment

Lying 65th in the global rankings, on a score of 49.4, South Africa is riskier than Turkey (62nd) as well as Romania and the Philippines, sequentially higher in the rankings, plus a host of other, safer EMs further up the scale.

South Africa’s risk score has fallen more steeply than any of sub-Saharan Africa’s most sought after credits, downgraded more than 12 points during the past decade, and often preceding a series of credit-rating downgrades.

The latest of these, in July, saw Fitch alter its BB+ rating from stable to negative, signalling it may soon go the way of S&P by awarding a lower BB rating.

That leaves Moody’s clinging on to an unlikely investment grade – though as credit-rating enthusiasts will only be too aware, the rating agency tends to be far slower than its contemporaries to action any change.

Political risk has improved where government stability, addressing corruption and transparency are concerned, but not in terms of other aspects, such as policymaking.

Which means scores for all bar one of South Africa’s economic risk indicators are lower year on year, with economic growth, unemployment and fiscal balance scoring less than five out of 10, pinpointing levels of risk that only the unwary would ignore.

Admittedly, GDP growth was fairly impressive in the second quarter, assisted by reduced load-shedding in the energy sector and increased mining output, but was rebounding from an equally large downturn in the first quarter.

Sustaining this in a global slowdown will prove difficult, with forward-looking indicators showing economic activity stagnating and few economists expecting annual growth to exceed 1% this year.

And yet sustaining it is crucial for resolving an unemployment rate of 29% on the official count, or as high as 38.5% using the wider definition, which is excessive whatever the measure used.

Eskom supplies virtually all of South Africa’s power supplies, but with more than $30 billion of debt accumulated through cost overruns, state support could push the deficit above 6% of GDP in 2019.

And with the debt burden approaching 60% of GDP, and a current-account deficit hitting 4% of GDP this year, and possibly 5% in 2020, finance minister Tito Mboweni’s mid-term budget next month is clearly a key event, arriving barely weeks before Moody’s must decide on whether to drop its investment grade.

In that respect, the violence is a sideshow, though an uncomfortable one accentuating the key risks to investors and a reminder of the country’s deep-rooted problems.

“I regard the xenophobic violence to be an extension of the often violent protests against the poor delivery of public services by municipalities that occur with disconcerting regularity in low-income areas of South Africa,” says Isaac Matshego, an economist at Nedbank Group, and one of Euromoney’s survey contributors.

“All this instability unfortunately is raising South