Oil prices are up 8%, paring earlier gains of nearly 20% seen at the Asia open following the wide-ranging attack on Saudi oil infrastructure. The price spike signalled geopolitical worries rather than a loss of production. The chart below shows the attack caused the biggest supply disruption in history, exceeding supply shocks caused by the Iran revolution and the Arab oil embargo. JPY and CAD are today’s FX winners, but gold and silver are up against all currencies, recovering from last week’s metals slump. The Empire Fed (ISM from NY Fed) is due later, but world markets remain fixated on the US and Saudi response. Do not forget Tuesday’s UK Supreme Court ruling on whether PM Johnson’s prorogation of Parliament was legal. Then, all eyes shift to Wednesday’s Fed decision and Trump’s reactions. The Premium oil short was stopped out, leaving two existing trades in progress. New tactical Premium trades will be issued over the next two days. 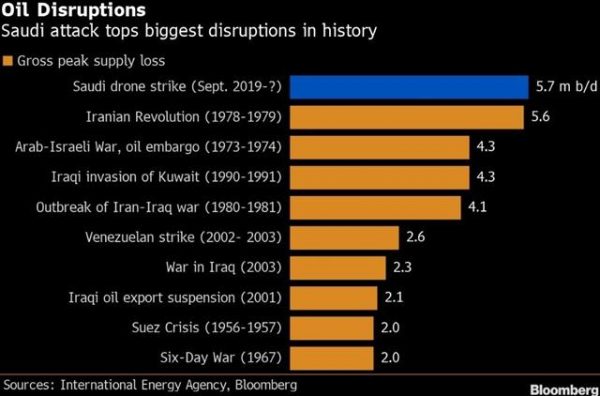 Japanese markets were closed to start the week but that did nothing to stop a wild open. Brent rose as much as $11.70 to hit $71.95 – the highest since late-May. WTI hit $63.54. Dow and S&P futures were down by as much as 200 and 25 pts respectively before stabilizing.

The attacks cut Saudi production roughly in half, taking 5.7 million barrels per day out of service. Videos of the facilities showed massive fires and report said it will take “weeks not days” to fully restore operations. At the same time, some (if not most) of the production could be restored within a week.

Given ample supplies and reserves globally – including large amounts of oil in storage in Saudi Arabia – the moves in oil cannot be justified by fundamentals. Instead, it’s the geopolitical risk that goes along with the attacks, as signified by the $20 jump in gold prices in early trading.

Houthi rebels in Yemen claimed responsibility for the attack, and if that’s the case, it marks a leap forward in their offensive capabilities, proving a continuous threat to Saudi oil. The US, however, insisted on blaming Iran, which could lead to US and Saudi strikes in retaliation – something that risks sparking open war. US Secretary of State Pompeo openly pointed the finger at Tehran, but so far the President Trump has refrained from doing the same. If he does, it may signify an imminent reprisal. So far he has said the US is ‘locked and loaded’ for a response but wants to hear from Saudi Arabia first.

In FX, the Canadian dollar is the early leader with the yen and Swiss franc both attracting bids. The US dollar is generally stable elsewhere. It also adds a wrinkle to Fed thinking. Higher gasoline prices are undoubtedly inflationary but the attacks add a further geopolitical risk.

There are still some final data points for the FOMC to consider as well, including Monday’s Empire Fed. The consensus is for a +4.0 reading.