WTI oil futures’ steam cooled after a fierce move led to a break above the upper boundary of the three-and-a-half-month sideways market, with the price of the commodity already starting to consolidate again. The price had gapped above the simple moving averages (SMAs), which now paint a positive picture, with their bullish cross.

The stall in the price is also reflected in the momentum indicators, as they show positive momentum has calmed. The MACD, although having inclined above its red trigger line into the positive region, has started to smooth out, while the RSI has flattened underneath the 70-level.

If the bulls pick up steam again, initial resistance could come at the 63.93 barrier, once the recent spikes of 63.22 and 63.34 are overcome. If the positive sentiment endures, an approach to test the April high of 66.57 could unfold, while if surpassed, the spotlight could move to the 67.92 swing high resistance, from 29 of October of 2018.

Overall, the short-term bullish bias would be confirmed with a close above the 63.93 swing high. However, if the price were to drop below 52.82, the short-term picture would turn back to neutral. 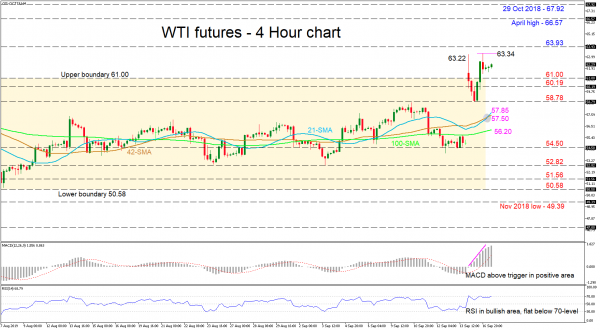