The stock markets are mixed after the hawkish rate cut by Fed overnight but treasury yields are back under pressure. Dollar rose mildly after the announcement but there was no follow through buying. Yen surges broadly today, riding on falling yields, followed by Swiss Franc. Australian Dollar is the weakest one on rise in unemployment rate, followed by New Zealand Dollar.

FOMC Cut Rate by -25 bps, mid-cycle adjustment could be done

Fed cut the policy rate by -25 bps to 1.75-2.00% as expected. The decision was not unanimous as three voters dissented. Boston Fed President Rosengren and Kansas City Fed President Esther George voted to maintain the policy rate unchanged. This has been expected as they did the same previously. The surprise came from St. Louis Fed President James Bullard who proposed a deeper cut of -50 bps.

The economic projections were little changed from June, although the members expressed greater concerns about the trade war uncertainty. The median projections of federal funds rate are at 1.9% in 2019 and 2020, then rises to 2.1% in 2021. Just based on this median figure, with federal funds rate at 1.75-2.00%, Fed is already done with it’s “mid-cycle” adjustments.

BoJ left monetary policy unchanged as widely expected. Under the yield curve control framework, short-term policy rate is kept at -0.1%. The central bank will continue JGB purchases to keep 10-year yield at around 0%. Annual monetary base expansion will be kept at around JPY 80T.

On the outlook, BoJ expects that the economy is “likely to continue on a moderate expanding trend, despite being affected by the slowdown in overseas economies”. Domestic demand is “expected to follow an uptrend”. Exports are “projected to show some weakness”, but still be on a “moderate increasing trend”. CPI is likely to increase “gradually toward 2 percent”.

Risks include US macroeconomic policies, protectionism, emerging markets, global adjustments in IT goods, Brexit and geopolitical risks. BoJ warned that “downside risks concerning overseas economies seem to be increasing, and it also is necessary to pay close attention to their impact on firms’ and households’ sentiment in Japan.”

USD/JPY retreats sharply after hitting 108.47. Intraday bias is turned neutral again. Further rise cannot be ruled out as long as 107.45 support holds. But we’d continue to look for topping sign as it approaches this 109.31 key resistance. On the downside, break of 107.45 minor support will suggest that rebound from 104.45 has completed. Intraday bias will be turned back to the downside. Break of 106.68 resistance turned support will confirm and target 104.45 low. However, decisive break of 109.31 will carry larger bullish implication. 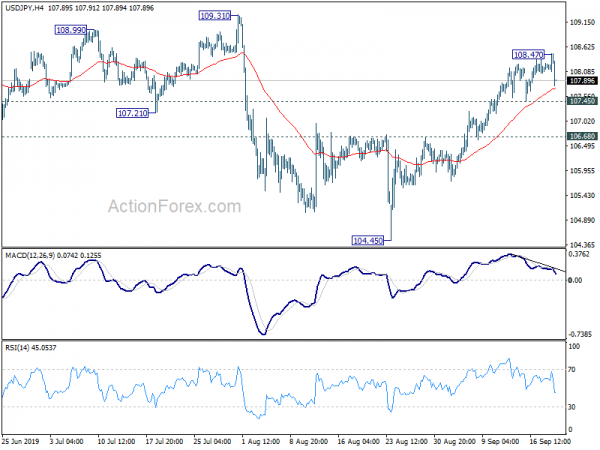 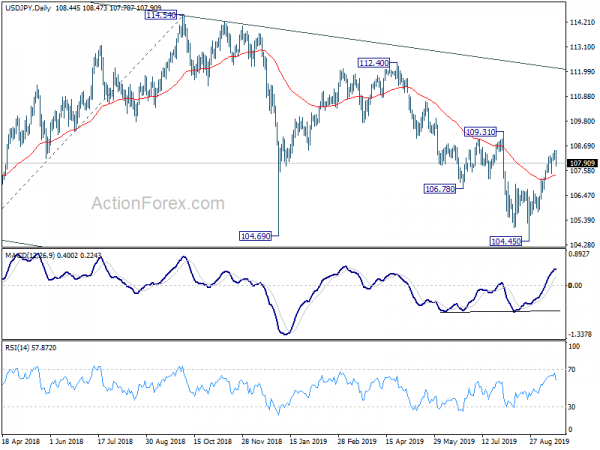