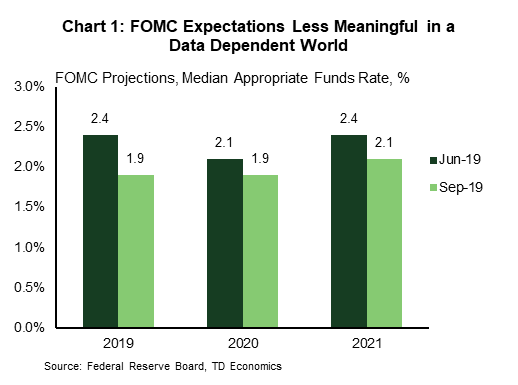 The main event for investors this week was the Fed’s rate decision. Equity markets managed to hang on to last week’s optimism. However, long-term Treasury yields were a little lower as bond markets remain cautious on the economic outlook.

As expected, the Fed cut its key lending rate, but there was little change in its economic forecasts. Investors may have been disappointed by the Fed’s “dot” plot, which showed the median FOMC member does not expect to lower rates in the next few years. It is important to note that Chair Powell de-emphasized the “dots” in the press conference after the decision. He argued that when the Fed is dealing with a high degree of uncertainty and heightened data dependency the dots farther out have less meaning.

Recent history has borne this out. As recently as June of this year, the median FOMC member did not expect to cut rates in 2019 (Chart 1). In the three months since, the Fed has cut rates twice. The FOMC will clearly shift in response to risks to the economic outlook. It is late in the business cycle, with limited pent-up demand and mounting geopolitical risks. This requires the dot plot to be taken with several grains of salt.

Our new forecast discusses how a lower growth trajectory over the next year and continued uncertainty on the trade front is likely to lead the Fed to cut rates once more this year. Indeed, the Fed is not the only central bank easing policy. Easier financial conditions globally should help soften the negative cycle taking hold in sentiment, and ultimately sow the seeds for a modest firming in global economic growth in 2020.

Here in the U.S. we are finally starting to see the positive impact of falling interest rates. The one percentage point drop in mortgage rates since late 2018 is finally providing a boost to the housing market (Chart 2). Residential investment is likely to expand in the third quarter for the first time in almost two years. We expect it to continue to grow at a modest pace, as positive demand forces – record-low unemployment and low mortgage rates – push up against challenges on the supply side – a lack of inventory of homes for sale, and still-inadequate construction.

Adding to an eventful week, the GM strike halted production at more than 30 U.S. plants. There are few signs of a deal, and the strike is likely to subtract around 0.1 percentage points off real GDP growth in Q3. The impact on fourth quarter growth will depend on how long it lasts and on how quickly GM ramps up activity after the strike. A four-week strike would see a very limited bounce back in activity in the fourth quarter, but would push the rebound in growth more into the first quarter of 2020.

Finally, oil prices have fallen back after their spike on Monday. While the increase was startling, oil prices remain about 18% below their year-ago level, and prices at the pump continue to put downward pressure on inflation, adding to consumer purchasing power – at least for now.

Canadian markets saw a steady rise through the week with the TSX up 1.4% and reaching an all-time high. Following a bumpy ride, due in no small part to the drone strikes on Saudi’s oil production facilities, WTI price had settled to US $58/barrel at the time of writing.

Canadian data came in droves this week, painting a complex picture of the Canadian economy. While the housing market continued to strengthen, manufacturing activity and retail sales were subdued. Inflation data revealed nothing new, leaving the Bank of Canada (BoC) to look to other signs to guide the future course of monetary policy.

The housing market recovery is fully underway. Sales of existing homes rose for a sixth straight month in August (Chart 1). Winnipeg led the way with a whopping 18.2% gain. Most provinces saw an increase in sales as low mortgage rates, healthy labor markets, and robust population growth buttressed the housing industry. The weakness from earlier in the year seems to be a distant memory, and signs are now pointing to positive sales growth through 2020.

In a similar vein, retail sales also disappointed in July. Although incomes are rising at a decent pace and labour markets are solid, retail sales have trended sideways for more than a year now. It appears that elevated household debt levels and high debt-service ratios may be leading to a thriftier Canadian consumer. But, lower borrowing rates and stronger housing markets may loosen the purse-strings, at least a little, in future months.

Despite the action on the real side of the economy, price movements were stable. Headline inflation slowed slightly due to weaker gas prices, but stripping that and food prices out, core measures averaged exactly 2.0% in July, leaving the BoC to turn to other indicators to guide its policy path.

Indeed, the weakness in manufacturing will present a case for monetary easing to the BoC. Clearly, Canada is not immune to the global manufacturing slowdown and some insurance may help offset the negative impacts. As detailed in our newly released Quarterly Economic Forecast, with trade tensions, a softening global outlook, and uncertainty holding back investment, we expect the BoC to cut rates later this year.

We anticipate growth in personal spending to have slowed to a still firm 0.3% m/m in August from 0.6% in July. This would keep real spending growth at a still strong 3.9% pace so far in Q3, down from 4.7% in Q2. In the details, we expect a 0.3% m/m increase in services spending to be the main driver of the August gain, with a rise in spending on durables (0.3%) and nondurables (+0.2%) also helping on the headline. Moreover, we forecast income to rise a strong 0.5% m/m, following the soft 0.1% increase in July.