Euro is sold off broadly today after shocking poor Eurozone and German PMIs. As Markit put, that data could put pressure on ECB to add to its recent stimulus package. Sterling is somewhat dragged down by Euro and is following as the second weakest. On the hand, Yen is the stronger one as lifted by selloff in European stocks too. New Zealand and Australian Dollars are also strong.

Meanwhile, Dollar is mixed for now, awaiting fresh inspiration. China’s trade delegation announced an abrupt cancellation of US farm visit late last Friday. Bloomberg reported today that such cancellation was done as US request. The news eased worries that last week’s deputy level trade meeting ended with a negative turn. Yet still, based on what US President Donald Trump said, he’s after a “complete” deal with China, rather than an interim deal with some agricultural purchases.

Eurozone PMI manufacturing dropped to 45.6, downturn spreading to services too

Chris Williamson, Chief Business Economist at IHS Markit said: “The eurozone economy is close to stalling as a deepening manufacturing downturn shows further signs of spreading to the services sector.” The data suggests just 0.1% GDP growth in Q3. And, “with survey data like these, pressure will grow on the ECB to add to its recent stimulus package.”

Phil Smith, Principal Economist at IHS Markit said: “The economy is limping towards the final quarter of the year and, on its current trajectory, might not see any growth before the end of 2019.” And, “the manufacturing numbers are simply awful.” “All the uncertainty around trade wars, the outlook for the car industry and Brexit are paralyzing order books, with September seeing the worst performance from the sector since the depths of the financial crisis in 2009.”

France PMI: Fears of negative spill over effects from manufacturing to services coming to fruition

Eliot Kerr, Economist at IHS Markit said: “With services firms registering their slowest rise in activity since May, fears of negative spill over effects from the manufacturing sector are coming to fruition. Any intensification of such effects would likely dampen economic growth going forward.”

Australia CBA PMI Manufacturing dropped to 49.4 in September, down from 50.9 and missed expectations. That’s the first contraction reading since survey began in May 2016. On the other hand, PMI services improved from 49.1 to 52.5. PMI Composite rebounded from 49.3 to 51.9. CBA added that “overall, new order growth picked up and stronger confidence was recorded, but the rate of job creation softened to a fractional pace”.

CBA Senior Economist, Gareth Aird said: There are early signs that the combination of rate cuts, tax rebates and rising dwelling prices is having a positive impact on the services sector…. The dip in the manufacturing reading was a touch disappointing, particularly given the ongoing weakness in the Australian dollar. It may be the case that the raft of so-called geopolitical tensions are having a dampening impact on the local manufacturing sector.”

EUR/USD drops notably today but stays above 1.0926 low so far. Intraday bias remains neutral and more consolidations could still be seen. In case of another recovery, upside should be limited by 1.1164 resistance. On the downside, sustained break of 1.0926 will resume lager down trend from 1.2555 for 1.0813 fibonacci level next. However, decisive break of 1.1164 will be an early indication of larger reversal and target 1.1249 resistance. 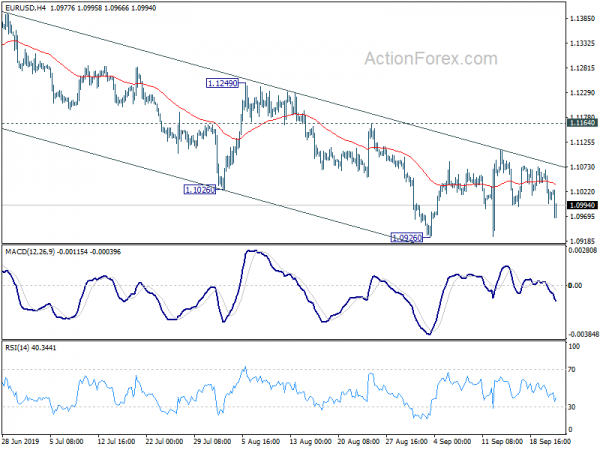 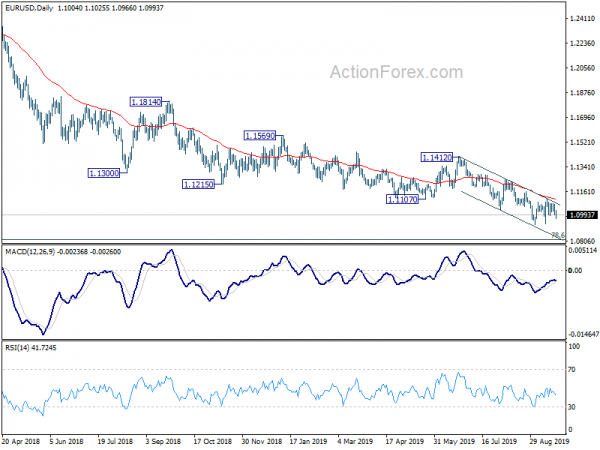