EUR/USD: How Low Can EUR Go?

The US dollar has extended its gains against European currencies today, causing the Dollar Index to break to a new weekly high above 99.10. The pound had been hammered again as political uncertainty in the UK continue to weigh on sentiment. The euro meanwhile is on the brink of posting a new post-ECB low below 1.0925. The shared currency tried to shrug off soft Eurozone data that was published earlier in the week, but the bears ultimately maintained control after the bulls made a more sober assessment of the situation and realised more monetary stimulus might be needed than a tighter policy to support a flagging economy.

As before, I maintain my bearish view on the euro as we have not seen any signs of improvement in the current weak fundamental backdrop. The dollar meanwhile is likely to remain supported even if the Fed is cutting rates again. This is because the US economy continues to remain in a better shape than most other economic regions in the world.

Speaking of growth, the US second quarter GDP is not expected to be revised today. The final GDP estimate is likely to show that the economy expanded at an annualised rate of 2.0% q/q in the April-June quarter. The data is due at 13:30 BST. Today’s other US macro data includes weekly unemployment claims and pending home sales. Meanwhile FOMC members Bullard (15:00 BST) and Clarida (16:45) will be speaking later, but first it will be ECB’s outgoing President Mario Draghi who is due to deliver a speech (14:30 BST) at the European Systemic Risk Board annual conference, in Frankfurt.

From a technical point of view, it looks like the bears are on the verge of pushing the EUR/USD to a new 2019 low below 1.0925ish. If successful, the next question will be how long can euro go? Well, if there is acceptance below this level, then future retests could see this former support level turn into resistance, leading to further falls, possibly towards the Fibonacci extension levels shown on the chart at 1.0877 (127.2%) and 108.14 (161.8%). However, if the EUR/USD refuses to hold below 1.0925 after a brief break lower, then in that case we will have to entertain the bullish scenario. 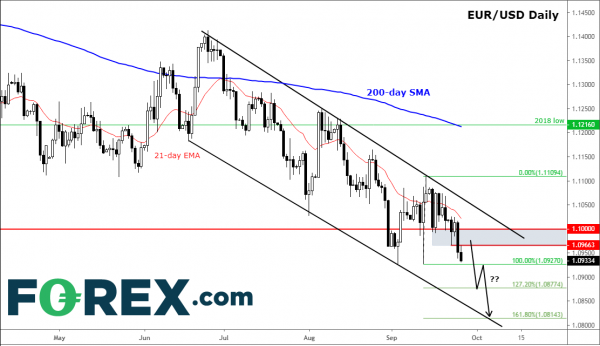