Macaskill on markets: The coming proxy war with Facebook 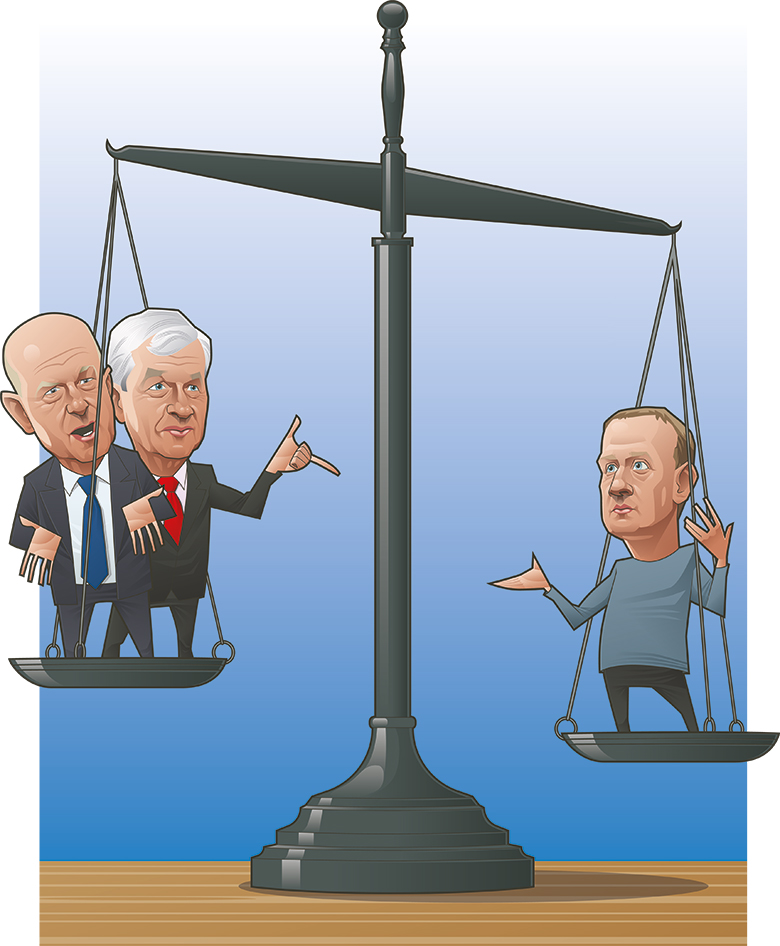 US president Ronald Reagan joked that the nine most terrifying words in the English language are: “I’m from the government and I’m here to help.”

Bankers often complain about the burdens of regulation, but they will rely heavily on support from government officials as they seek to prevent Facebook’s digital currency Libra from bypassing financial market incumbents.

The early signs for banks are encouraging.

Randal Quarles, the Federal Reserve governor with chief responsibility for US supervision and chairman of the Financial Stability Board of international regulators, announced after Facebook unveiled its Libra proposal that it will come under close scrutiny.

Bank of England governor Mark Carney warned that a regulatory framework for payments by new systems such as Libra will be needed before they are allowed to operate and drew a contrast with Facebook’s core social media business, which developed with little initial supervision.

Carney added that the BoE plans consultations about allowing new payment systems to hold interest-bearing accounts at the central bank in the same way as commercial banks, which poses a theoretical threat to incumbents.

The principle that regulators and politicians will examine each step of the development of Libra has nevertheless been established.

Credit card and payments firms including Visa, Mastercard and PayPal have agreed to commit $10 million each to join the Libra association that will set terms for the new “digital currency and infrastructure”.

But there are already signs that these firms are far from enthusiastic about Libra and may be playing along with Facebook to ensure some visibility into what is planned by a corporation that has 2.4 billion users – or almost a third of the world’s population.

So the companies could effectively serve as allies to banks in the attempt to slow the spread of Libra.

Facebook also intends to back Libra with real assets such as bank deposits and short-term government securities, and to encourage trading of the new currency on a network of competing exchanges. That approach and a structure that is comparable to an exchange-traded fund will leave plenty of scope for banks and other established financial market players to complicate business for Facebook as it seeks to broaden use of Libra.

Banks and other financial market incumbents will have to take care not to breach conspiracy laws by acting in concert to slow down progress by Facebook, however.

It might seem ironic that banks could run this risk in trying to combat competition from technology firms, which have far greater concentration of their existing markets than financial intermediaries.

Digital currencies are creating a new frontier for finance, but the impulse to behave in an anti-competitive manner is ancient

Most current discussion in the US about deploying the Sherman Anti-Trust Act of 1890 focuses on potential steps to loosen the grip of Facebook and Google on the digital ad markets, and reducing Amazon’s dominance of online retail sales.

But leading banks were forced to pay for Sherman act breaches relatively recently.

In 2015, a group of 12 banks paid $1.87 billion to settle charges that they conspired to fix prices and limit competition in the credit default swap market. All five of the US banks that dominate global investment banking – Bank of America, Citigroup, Goldman Sachs, JPMorgan and Morgan Stanley – were part of this group, as were European firms including Barclays, BNP Paribas and HSBC.

There are legal suits claiming that the banks played a similar role in restricting access to the interest rate derivatives markets.

If that push is successful, it could generate a bigger cost for dealers, given that the notional outstanding for interest rate derivatives at around $437 trillion, according to the latest Bank for International Settlements (BIS) survey, is more than 50 times the size of the $8 trillion credit default swap market.

In the emerging market for cryptocurrency trading, banks have so far been able to avoid exposure to charges that they are limiting competition, simply by proceeding very cautiously.

The crypto mood swings of JPMorgan chief executive Jamie Dimon have been closely charted, with Euromoney joining in the media fascination.

Dimon, who is virtually the only Wall Street head to offer unvarnished opinions, has shifted from stating that bitcoin is a fraud and comparing its rise to the tulip futures of 17th century Holland, towards offering a qualified endorsement of blockchain technology.

When JPMorgan finally launched a digital currency initiative at the beginning of this year, it was in the form of the JPM Coin, which will be backed by dollars held in JPMorgan accounts and remains in its testing phase.

Goldman is always on the lookout for buzz-worthy new developments that catch the attention of clients and have a potential for arbitrage of some form. So it was not surprising when reports emerged that a crypto trading desk was first planned there – and then shelved.

Nothing tangible emerged, and more recent speculation has shifted to the chance that Goldman will follow JPMorgan in branding a digital currency of its own (the launch of a Gold Coin would certainly guarantee a frenzy of coverage in the wilder reaches of the crypto-bro online community).

Facebook launched Libra with 28 founding members for its association, ranging from big payments firms to Uber and Lyft, a couple of telecom companies, some venture capital investors, a sprinkling of blockchain companies and a few non-profit organizations.

JPMorgan has gathered over 250 banks for its Interbank Information Network, which now comprises a cross-section of correspondent banks in all global regions in an agreement to use blockchain technology for payments and, unsurprisingly, does not yet include any of its closest competitors.

It may take time for legal complaints to develop over the governance of digital currency networks, but they are bound to emerge eventually, and banks that have a demonstrated ability to pay multiple billions of dollars in fines and settlements are obvious targets for litigation.

Digital currencies are creating a new frontier for finance, but the impulse to behave in an anti-competitive manner is ancient.

A quote from Adam Smith is often used to underscore this: “People of the same trade seldom meet together, even for merriment and diversion, but the conversation ends in a conspiracy against the public, or in some contrivance to raise prices.”

A little further on in the ‘Wealth of Nations’, Smith noted that the law cannot prevent these meetings, but added that it “ought to do nothing to facilitate such assemblies”.

Regulators know they have to tread a line between preventing abuses as money goes digital and permitting innovation. The BIS recently provided a thoughtful summary of the issues at play, and supervisors are so far proceeding in a sensible direction, including the development of a slogan that is easy to grasp: “Same activity, same regulation”.

The trick for bankers will be to co-opt their allies in government in the coming proxy war with Facebook without engaging in a conspiracy against the public.