EU-UK Strike A Deal, Yet The Market Remains Cautious

At the 11th hour, the UK and the EU were able to strike a deal about Brexit, yet the market remained rather cautious after the release. It was indicative that the pound spiked upon the release of the news, yet cooler thoughts prevailed later on, keeping the pound in check. Some analysts tend to describe the deal as “harder”, than the one achieved from Theresa May, as it seems to put more distance between the EU and the UK. It would be indicative that Northern Ireland is to remain under EU customs Union, yet the Northern Irish assembly will be able to vote its way out in 4 years. UK’s PM Johnson has to return to the UK and convince the UK Parliament to back his deal with the UK, in a crucial vote on Saturday. Johnson’s majority in the UK Parliament depends on the votes of the DUP a northern Irish party, which officially has stated that it is against the deal. The vote is expected to be a very narrow one, as at first sight the majority for it simply does not seem to exist, as the opposition is against it. As the result seems ambiguous until the last moment, volatility for GBP pairs could be higher. On the flip side one could argue that the recess until Monday’s opening could let the result and its effects, slowly sink in to traders. Never the less, should new alliances be formed and the UK Parliament back the deal we expect the pound to open with a positive gap on Monday. Should the UK Parliament reject the deal, the UK government is required by law to ask for an extension in the Brexit date, however Johnson opposed that idea in the past, so further trouble for the pound could lay down that road. Cable rose yesterday, yet proved unable to break the 1.2885 (R1) resistance line. The pair is currently threatening to break the upward trendline incepted since a week ago and should it clearly break it, we would switch our bullish outlook in favour of a sideways movement. Never the less Saturday’s vote in the UK Parliament, is expected to increase volatility substantially for the pound and at the same time could direct the pair either way, depending on the decision. Should the bulls be in charge of the pair’s direction, we could see it breaking the 1.2885 (R1) resistance line and aim if not break the 1.3015 (R2) resistance level. Should there be higher volatility as mentioned before, we could see the pair breaking all of our resistance lines and touching the 1.3200 level. Should the bears take over, we could see the pair breaking the 1.2760 (S1) and aim for the 1.2640. Should there be extreme downside volatility, we would not be surprised to see cable landing near the 1.2200 levels, at which it was before Brexit hopes started to rise, on the 10th of the month.

The CAD strengthened against the USD yesterday reaching an 11-week high. The rally seemed to be supported by favorable Canadian financial data, yet at the same time adverse US releases which weakened the USD against other currencies as well. Also, a rise of oil prices yesterday, favored the Looney as Canada is a major oil producer. Central bank interest rates and dynamic differentials in the two economies, could be providing also a positive effect for the CAD at the current stage. It should be noted that analysts were quick to note that a more risk on mood may also have helped the Looney. Also, Canada will be holding elections on Monday and despite the political system being stable, some volatility could be present for CAD pairs. USD/CAD dropped further yesterday, aiming for the 1.3125 (S1) support line. We maintain a bearish bias for the pair, as the downward trend is intact. Should the pair continue to be sold by the market, we could see it breaking the 1.3125 (S1) support line and aim for the 1.3025 (S2) support level. Should the pair’s long positions be favored by the market, we could see it aiming if not breaking the 1.3223 (R1) resistance level. 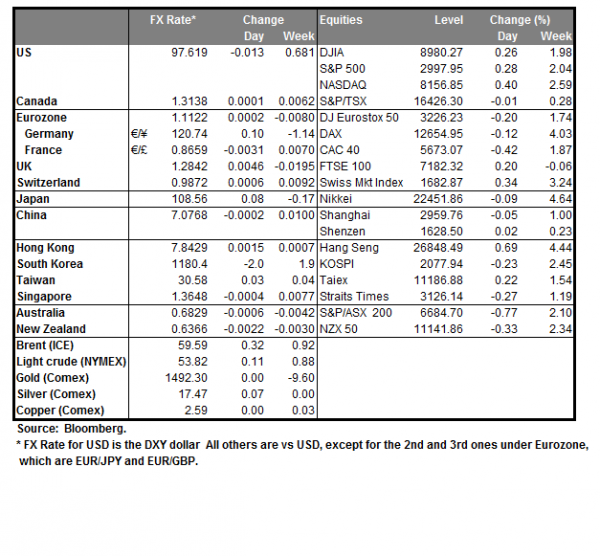