Sterling opens the week mildly lower as Brexit uncertainty is dragging on. Nevertheless, selling pressure is weak so far because there is still enough time for the Commons to ratify the Brexit deal to even avoid another extension. At this point, Swiss Franc is following as second weakest, then Yen. On the other hand, Australian and New Zealand Dollars are the strongest for the day so far. Risk sentiments improved as Chinese Vice Premier Liu He confirmed substantial progress in trade negotiations with US.

Sterling opens the week mildly lower but loss is so far very limited. The House of Commons voted on Saturday to withhold the decision on UK Prime Minister Boris Johnson’s Brexit instead. Instead, MPs forced Johnson to seek another three-month extension from EU first. While initially refused, Johnson eventually sent a delay request to EU, without signing it.

At this point, it’s generally viewed that UK is still on track for orderly Brexit, just deferred. The vote on the Withdrawal Agreement Bill could still be held on Tuesday, after Johnson makes another attempt on Monday to get Parliament to sign off on the principle of his deal. And, if Johnson wins, the extension request could be withdrawn and Brexit will happen on October 31.

The Times of London reported that EU is ready to approve a three-month flexible extensions. UK could leave EU earlier if the Parliament could ratify a deal. Or, Germany could push for a longer extension, pushing the deadline well into June 2020, if the UK government meets are serious obstacles.

The UK government activated the so-called “Operation Yellowhammer” on Sunday, entering the “final, most intensive stage” of disorderly Brexit preparation. Quoted by Bloomberg, a government official said, “with less than two weeks until 31 October, hundreds of civil servants will from today move to work on these operational matters.”

Chinese Vice Premier Lieu He said on Saturday that US and China have made “substantial progress in many fields” in trade negotiations earlier this month. And, that laid an “important foundation for the signing of a phased agreement”. He added that “China and the US can meet each other half way, based on equality and mutual respect, addressing each other’s core concerns, striving to create a good environment and achieving both sides’ common goals.”

It’s believed that teams from both sides are working towards the deadline of APEC meeting in Chile on November 16-17. Presidents from both countries could make use of the opportunity to side the phase one of the trade agreement. However, at this point, intellectual property protections, currencies and financial services are expected to be covered. But the depth of the agreement is uncertain. Some speculated that it could be “super light” for rebuilding trust first.

Incoming ECB President Christine Lagarde talked about the challenges to the global economy in the CBS News “60 Minutes” program. She warned that US President Donald Trump has “many keys” that would “unlock the uncertainty of the risks”. The biggest key was in relation to “predictability and, and certainty of the terms of trade”. Also, she emphasized “market stability should not be the subject of a tweet here or a tweet there. It requires consideration, thinking, quiet and measured and rational decisions.”

Europe is facing increasing fears of recession, as led by slump in manufacturing. And the room for more monetary stimulus by ECB is very limited, given that rates are already negative. Lagarde said “there’s a limit to what central bankers can do. There’s a limit to how far and how deep you go into negative territory.” However, she added, “There’s a bottom to everything, but we’re not at that bottom at this point in time.” The interview was done in September though.

Mario Draghi will have his last monetary policy meeting as ECB President this week. As the stimulus package was announced back in September, no change is expected this time. Draghi will likely focus more on the past, his tenure, than future, leaving the room for incoming President Christine Lagarde. So the meeting itself will likely be non-eventful. Euro could have more reactions to PMIs and German Ifo business climate instead.

Canadian Dollar has been supported by resilient economic data recently. But focus has already been on the federal elections, which is seen as a Razor-thin tight race. The end result could very likely be a minority government whether the Conservatives or Liberals win more seats. That might be a bit Loonie negative for the near term. Though, retail sales data could give the CAD some support.

Intraday in AUD/USD remains mildly on the upside as rebound from 0.6670 extends. At this point, we’d continue to expect strong resistance from 0.6894 resistance to limit upside to bring down trend resumption. On the downside, below 0.6810 minor support will turn intraday bias neutral first. Break of 0.6723 will target a test on 0.6670 low. However, firm break of 0.6894 will dampen our bearish view and turn focus back to 0.7082 key resistance. 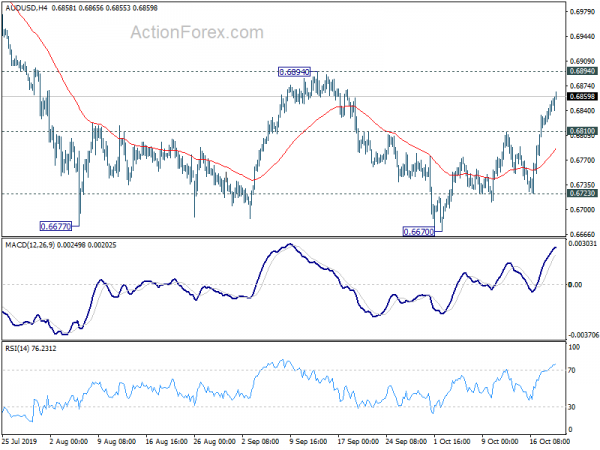 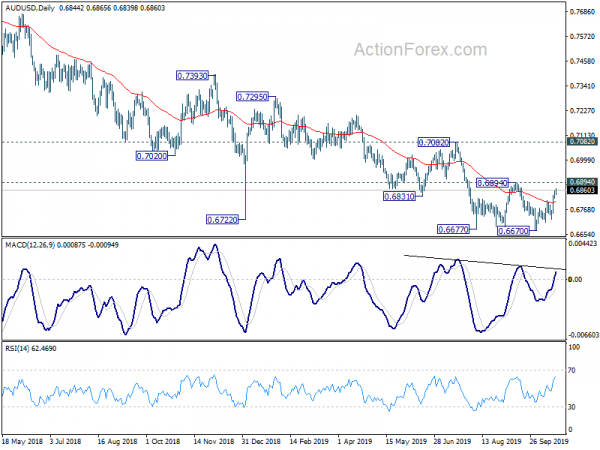